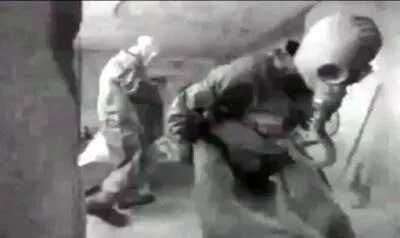 Back in the early 1960s, the KGB conducted an expedition to Egypt where they allegedly discovered the remains of what they called an ancient alien inside the Egyptian tomb. Soviet intelligence set the expedition under Project ISIS to unveil the legend of the “Tomb of the Visitor” god. In 1998, the U.S. network Sci-Fi told about the mystery in a documentary titled “The Secret KGB Abduction Files.”

This secret program was revealed by a Russian neurologist and astrophysicist named Viktor Ivanovich who was recruited by the Soviet intelligence as a scientific advisor for the development of advanced propulsion systems. Ivanovich explained to Sci-Fi that he had got access to the KGB secret files about the Project ISIS which targeted to discover knowledge and traces of alien technology in Egypt. The mission included the team of Egyptologists of the Soviet Academy of Sciences, Hermitage Museum Egyptologist Herman Alekseen, military experts specialized in chemical and radioactivity, some astronomers, and Sami Sharaf, Secretary of Gamel Abdel Nasser, the second president of the Republic of Egypt.

When the expedition was organized, there were around 20,000 units of the Soviet military in Egypt. The search was initiated after the surprising discovery of a mysterious tomb by the two Arab tribes in one of the Giza pyramids. The tribes were sick soon after entering the chamber and they were immediately hospitalized. An Egyptian intelligence uttered to media that they had awakened the “Visitor God.”

This discovery alerted the KGB and since then, Project ISIS became the top priority. The research team analyzed the tomb discovered by the Arab tribes. According to Ivanovich, the Soviets found the tomb full of artifacts. The findings included 15 boxes of artifacts, 1 partially mummified body, one stone sarcophagus, 8 samples of hieroglyphics. According to a report prepared by one of the scientists, they felt a strange repulsive force coming out of the walls while inspecting the area.

Besides, a report by one of the cryptographers who decoded the hieroglyphic inscriptions engraved on the walls read a prophecy about the return of the winged deity. Among all, the most intriguing discovery was the mummy found in a sarcophagus, that was 2 meters tall, much bigger in size than the average height of ancient Egyptians.

Using carbon dating, 14 different tests were carried out by molecular biologist Boris Timoyev that revealed that the mummified body was between 12,000-13,000 years old. According to Egyptian legends, a family of gods descended from stars who brought knowledge and wisdom to them. After finishing their work on Earth, they returned to stars except for God “Osiris.” He was the Ancient Egyptian god of the dead, and the god of the resurrection into eternal life, ruler, protector, and judge of the deceased. His cult originated in Abydos, a city in Egypt where tradition locates his tomb.

Britannica writes: “Osiris was slain or drowned by Seth, who tore the corpse into 14 pieces and flung them over Egypt. Eventually, Isis and her sister Nephthys found and buried all the pieces, except the phallus, thereby giving new life to Osiris, who thenceforth remained in the underworld as ruler and judge. His son Horus successfully fought against Seth, avenging Osiris and becoming the new king of Egypt.”

God Osiris indeed came from the stars in a flying boat. Such a formulation would be comparable to modern UFO sightings that constantly occur around the world. That time, the Kremlin was interested in various alien theories. Based on the ancient stories, a team of researchers who found the mummy was convinced that it belonged to Osiris.

During the cold war, the Soviets were looking for advanced technology and somehow stories behind the origin of the pyramids attracted them. Moreover, Soviet scientists began to wonder about the real function of the pyramids and if they had been designed for a particular purpose. Some people believed that they are powerful machines able to channel some energy of the space or some kind of interstellar transmitter.

The Sci-Fi documentary included a video purportedly noting a part of the top-secret “Project ISIS” KGB expedition to Egypt. The US broadcaster claimed that the film was obtained from an unidentified Russian mafia. The experts of Sci-Fi guaranteed the authenticity of the content of the black and white video and the testimonies of high-ranking KGB officials, confirmed that the sarcophagus contained the remains of an alien creature.

The footage shows a number of KGB officials entering an Egyptian burial chamber without any protective gloves and masks. When they opened the sarcophagus, fumes of toxic gas came out that made them hard to breathe. As the clouds of gas faded, they saw a mummy, laying in the coffin and took some photographs. Later, a few researchers in protective suits analyzed the mummy and probably checked the radiation in the area.

Ivanovich claimed that “the footage reveals the most important discovery in the history of mankind.”

He added: “Operation ISIS was used to secure alien documents and technology which were stored at a secret tomb in the Giza plateau, in hopes to use it for military purposes. What they found were the remains of an alien creature who died about 10,000 years BC.”