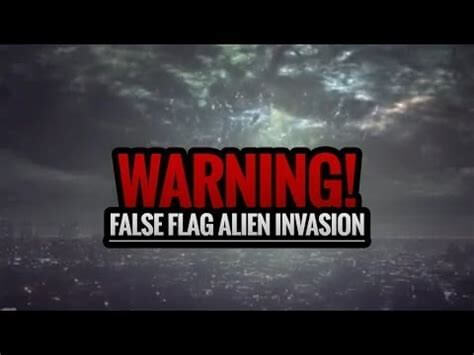 ‘The great divide has once again reached down into Ufology. Tom Delonge’s recent statements regarding episode 6 of Unidentified have caused a stir. Claims of a UFO shooting down a helicopter have caused confusion and outrage, despite not yet being examined or confirmed. The old ‘threat’ argument has raised its ugly head, with people refusing to have the conversation (mainly amongst the new age consciousness groups). Additionally, this links into one of the more bizarre Ufology conspiracies, that of an ‘Alien False Flag’ (AFF) invasion claim. This is an old conspiracy that has come from a respected researcher who has been given ‘insider intel’ from unverifiable sources that supposedly worked inside deeply classified special access projects. These started around the mid 1990s and even have traction to this very day. The concept is that the U.S. government is promoting a UFO ‘threat’ and will eventually hoax an alien attack against humanity wiping out billions with the reversed engineered extraterrestrial spacecraft at Area 51/S4.
On the surface, and to the normal everyday person, this would seem detrimentally psychotic. Firstly, that such a horrific, nefarious conspiracy (if possible) would even be feasible. Secondly, that any patriotic American official would even consider this. But here we are debating it in 2019 and into 2020 after its recent rise to popularity. The source being UFO experts that believe TTSA and AATIP are working a secret government agenda, promoting a UFO threat and a precursor to a fake invasion. Some may argue it is unverifiable conspiracy theory, some may not.

The question is how do we tell what is true and what is not? How do we know this is real and not a psy-op performed on unwitting Ufologists, used to destroy the credibility of UFO research in the mainstream. How do we know if there is a genuine threat or not? Can we trust the government (with a history of lying) to give us the truth on a threat scenario? Are we assuming TTSA are active CIA conduits or do we have any direct evidence?

To break it down, the AAF requires certain boundaries in which to operate. AFF requires the use of the Alien ‘threat’ concept, arguably promoted through films, tv, books and mainstream media. Bare in mind that films often require a bad guy or group as the antagonist, Aliens are used in this way to represent the unknown and the fear of induced danger.

Maybe the use of Aliens as the big threat in films etc, as it simply makes for good entertainment? But then, maybe not?

Then there is the big claim of ‘MILABS’, Alien abductions are really done on humans by humans. Undertaken by the government.

‘MILABS’ can be described as follows;Maybe they are a genuine threat, and you simply don’t believe it due to mistrust of the government. Maybe they are not a threat and the government needs to play a certain card to engage congress. Maybe at one time or another some groups with lunatic tendencies wanted to kill half the world and blame ‘Aliens’. Or maybe it is all clever disinformation for the gullible world of Ufology who struggle with discernment?

At this point I wouldn’t want to discount anything, but I wouldn’t count on anything either.

“A deceitful military operation performed to convince the targets of the operation that they have had an encounter with extraterrestrial beings, though it is actually a staged ploy”

Whilst I personally wouldn’t dare to question the data or the witnesses who gave testimony of their own experiences with regards to military operations over the last 70 years, I would like to question the motives of why any government would do such a thing.The most profound argument is to create a culture of fear surrounding these potential and alleged extraterrestrials who supposedly ride in UFOs. The end game is to reach fever pitch in which an ‘Alien False Flag’ operation is then deployed on an unwitting public. ‘Shock and awe’ tactic could be called into question, why then do you need to drip feed the public through the mainstream? Why not just attack and have the required effect?UFOs which are really ‘Alien Replication Vehicles’ or ‘ARVs’ were said to have been used to attack cattle and various other livestock and then draw pretty patterns in the English summer crops. As the plan progressed the ARVs and psychotronic weapons (apparently) along with fake ‘Gray Aliens’ (men in rubber suits?) abduct people through bedroom walls and place implant devices under the skin.

This is then proceeded by the main course, UFOs or ARVs presumably attack people, cities and towns, killing innocent women and children. (But this hasn’t happened yet). AFF is one of those strange situations, despite it being utterly improbable, unrealistic and borderline psychotic, part of you still believes it on some level. After all, you know UFOs exist. They are potentially ‘Alien’. The government likes to throw a false flag operation into the mix to sway opinion. Why then wouldn’t they go to the next step?

But then, you think that there is no tangible evidence to support the AAF theory (except for testimony from unverifiable insider sources, given to one famous new age consciousness researcher) and your own guess work based on experience of what you think you already know. Along with the how what, where and why you find yourself thinking about the consequences of AAF.

The world would be drawn into chaos. National security laws are passed to restrict freedoms, marshal law is passed, etc. The world’s powers unit under one banner like in the film Independence Day (1996), to fight the evil Alien threat. Just like President Ronald Reagan stated in the 1980s.

So, with any luck only a few billion people (along with Americans) will be sanitised from the Earth. I wouldn’t want to be the patriotic pilot who is on shift that night…

Surely, the pilots would be selected for their own psychopathic traits before the night? Leave nothing to chance. This has been planned out for decades. Carol Rosin passed over this intel to Stephen Greer which came directly from Von Braun (the Nazi paperclip scientist). I don’t completely doubt that he said what he did or even that Carol was exaggerating/lying/mistaken. However, there are still issues with what was stated.

So, she claims terrorists, third world countries, asteroids and the final card is the alien card would be identified as threats – all of which is a lie –

This is interesting, I admit. But….

Are these Von Braun’s personal opinions or was he read into a classified program that was doing this?

If so, what program? Who funded it?

How were asteroids going to be targeted as a threat? Psycho-social operation or could they drag lift a space rock towards Earth?

Why haven’t we seen the asteroid threat come up yet in the same way UFOs have been identified?

What part of the ‘Alien threat’ is a lie? Did he mean that the aliens are the lie, or that they are not hostile is the part which is the lie? (or are the hostile sometimes but only when provoked? Or is that part the lie?)

Have any other Nazi paperclip scientists come forward to validate the claims?

Sadly, one witness testimony taken 30 years ago from a dying man (Nazi) who may or may not have been giving his own personal opinion is, problematic.

Let’s assume this is all accurate for a second.

We know within government agencies that things change, people change, plans change from week to week. Funding and projects are amended frequently, how many times have NASA had plans to go to the moon, then mars, then an asteroid and then the moon again?

If you think that was bad, imagine trying to float the idea of killing millions of Americans at the latest deep black covert unacknowledged CIA staff meeting for special access programs. Seriously. What patriotic American official is going to be ok with that?

And that plan would have to then be passed on for the next 30 plus years, over and over. That would be a lot of psychopathic generals, intelligence officers and politicians who just happened to all coincidentally line up in succession for the right job at the right time, all of whom are happy for murder of civilians aka,  9/11 x 1000.

(9/11 itself may have been questionable bizarre for many different reasons but the evidence is not there suggesting it was an specific ‘inside job’. It is circumstantial at best)

So what if it is all true, to the point ARVs are abducting people globally as part of a larger threat tactic proceeding an invasion. The sheer logistics essentially wouldn’t fit the data of all abductions being ARV. Every country and every demographic reaching into the tens of thousands. If any genuine abduction is done by actual Aliens, is that not deemed threatening to humanity?

Seems silly to me in a lot of ways to not consider all options on ARV. Should we not have the conversation?

Replace the word ‘UFO’ with ‘Russian’ in the below statements, given that the following are indeed true.

UFOs are observing and tampering with American nuclear weapons. UFOs are invading American military carrier strike group airspace. UFOs are abducting Americans. UFOs are engaging with Navy fighter planes. Potentially UFOs could eliminate whatever they wished with no prevention. Does the potential for severe risk make for the threat aspect? Specifically one that cannot be controlled?

It doesn’t make for good reading, hypothetically that is. I think we can refer to the great Ufology thinker of UFO Jesus.

“ Perhaps believing UFOs are not a threat of any kind means you are without skepticism of the phenomena. If you examine some paranormal experiences there is an inherent trickster element present. ‘Trickster’ doesn’t necessarily equate to threatening, but it’s also hard to see it as altruistic.

The fact that UFO intelligence meticulously allows itself to be seen by man, but in a way that doesn’t provide enough irrefutable evidence that all of mankind would agree it’s here and talk about it non-stop is, you could argue, an element of a trickster persona. Since UFO intelligence allows, promotes and I’d argue *engineers* an environment where people can argue, and debate over the validity of it when it’s absolutely real gives room for caution on what the agenda is of UFO intelligence.

While I don’t agree with assuming UFO intelligence is evil; There is definitely room to have skepticism over whether what it’s trying to accomplish for humanity is really in humanities best interest or not.

After all, it could accomplish two things quickly: 1) have an irrefutable display, & 2) announce its agenda. It’s done neither of these things. IMO, with sufficient thinking about the history of the phenomena, there is no way one can be without at least some skepticism of whether or not the phenomena truly is looking out for the best of humanity”

Maybe they are a genuine threat, and you simply don’t believe it due to mistrust of the government. Maybe they are not a threat and the government needs to play a certain card to engage congress. Maybe at one time or another some groups with lunatic tendencies wanted to kill half the world and blame ‘Aliens’. Or maybe it is all clever disinformation for the gullible world of Ufology who struggle with discernment?

At this point I wouldn’t want to discount anything, but I wouldn’t count on anything either.

Well I have Know for a long time before we get the real Disclosure there would be False Flags to discourage us thanks to Dr, Stephen Greer and many others who at the UFO Conferences over the years have warned us to be prepared for this.  Glad I was paying attention and listening intently.

Stay safe and study up on these things, NOBODY likes getting caught with their pants down LOL.

Thank You and Stay home in Quarantine,