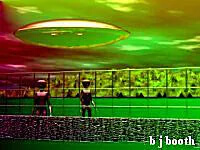 The following account of the sighting of alien beings came to me directly by eyewitness testimony. The lady who related her story swears that the facts of the case are genuine. She appeared to me to be an honest, upstanding individual with nothing to gain by spinning such a fantastic tale that follows.

Although it cannot be proven at this point, this is more than likely a case of Alien Abduction.

The case began on November 10, 2005, at about 3:00 AM. Our eye witness Maria and her daughter, heard an unusual humming sound, like that of a hurricane. Maria and her family lived in Aguada, Puerto Rico at the time of the incident. This strange sound hurt their ears, and they looked out of their window to find the source.

Maria and daughter both clearly saw a disc-shaped UFO moving toward the west, and the rear of their house. Behind their house was a large forest, only marred by a large antenna. Beyond the forest lay the Atlantic Ocean. They were able to see a row of windows around the disc. It also had a green hue around it. The windows were of a dark green color.

For a time, the mother and daughter would hear the same sound a couple of times a week. It was their custom to stay up late together watching Spanish soap operas. On April 28, 2006, the sound was again present near their home. Their dog, Dora, was incessantly barking in the backyard. Maria flipped on the back lights, and looked through her dining room window.

She saw her dog laying on her back, with all fours straight up. She appeared to be either dead or unconscious. The family kept the dog chained to a pole at the rear of the backyard. She called to her dog, “Dora, Dora, what’s wrong Dora?” As she lifted her eyes to the back fence, she was startled to see two creatures, which she took to be alien beings.

They were standing just behind the back fence, and looking straight at her. One of the beings was only a few steps from the dog, with the second being close by. She describes the beings as about three and a half feet tall, with large oval heads, and big, slanted eyes. Their skin was a pale gray color, with only slits for mouths, and two small holes for nostrils.

They also appeared to be naked, with very slim arms. Because of a cinder block wall a foot and a half tall at the bottom of the fence, she could not see the beings’ legs. The aliens were staring at her. She stared back. She could sense being talked to, not by speech, but mentally. She felt they heard her when she thought to herself, “I’m going to wake up my husband, Nelson.”

The aliens were still there. The staring match continued. The seventeen-year-old daughter was scared, and went back to bed. Her mother followed her to her room, and spent about 10 minutes with her.

She then returned to the window once again. The beings were still there. Then, one of them told her mentally to open the back door. In her mind she refused to obey the beings order. He was more emphatic with her now, as he said, “You’re going to open the door.” She then began to move toward the back door, feeling very drowsy.

This was the last thing Maria recalled. The next thing she knew, she was waking up the next morning in her own bed. She immediately went to her daughter, and asked her if she remembered the beings the night before. Her daughter corroborated her mother’s account of what had happened. Maria than told their story to her husband, who slept in a separate room which faced the back yard. He did recall the dog barking the night before, but thought nothing of it.

The witness advised me again that beyond the family’s back yard fence was the large rainforest, which leads to the ocean. She says that this area is pitch black at night. Any activity behind the fence could hardly be seen from the back door of the house. If a craft had landed there, it could easily stay hidden from view.

Her husband, after hearing the strange story, went into the back yard to check things out. The first thing he noticed was that the back door was open. He was also struck by the odd behavior of the dog. He seemed listless, and would not eat or drink anything. She would only lay around as if she was sick. This continued for several days, before the pet eventually returned to normal.

Although this would mark the end of the alien sightings, it would not be the end of strange happenings at their home. On Monday, May 1, 2006, at about 1:00 AM, Maria was sitting in her living room, talking on the telephone. She was surprised to see a bright, glowing light moving through the woods in their back yard. This time, she immediately told her husband.

They closed all the windows in the house to block out the light. The mother of the house was almost hysterical, and sobbing. She feared a return visit of the alien beings. Her husband was able to calm her down. Then, about an hour later, the same hurricane-like sound was heard. It sounded as if it was coming from over the house. There was a loud bang as if something had landed on their roof!

The family discussed calling the police, but decided against it for fear of being laughed at. The only consolation to our witness was the fact that her daughter had also seen the beings in their back yard. Without her backing her story, she felt like she was losing her mind. She still cannot be certain that she was abducted, although she did have a dotted, circular mark on her left hand.

She has not a clue as to how it got there. After a time, the mark went away, and things began to return to normal. As normal as they can be. The family had moved to their home in Puerto Rico from New York City, where the husband was an Assistant Deputy Warden for the Department of Corrections for twenty years. He worked at Riker’s Island jail complex. He was known as a “no nonsense” type of man.

He had retired because of a heart attack, and felt that leaving the rat race of a large city would afford them some peace and quiet. How little did they know what lay in store for them in Puerto Rico. Because of the harrowing experience they encountered in Puerto Rico, they are selling their house, and moving back to the mainland. They have told their story to the mayor of Aguada, and also to Channel 5 television network, but no one seems to believe their fantastic account.