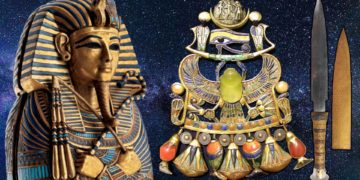 On November 26, 1922, the British archaeologist Howard Carter, together with Lord Carnarvon, entered the interior chambers of a mysterious tomb, intact by human hand since the day of its construction. What they there saw was mesmerizing. The glint of gold was everywhere, as the tomb was full of golden artifacts and decorations.

This was the first step of a monumental excavation process that took several years and led to one of the greatest archaeological discoveries of all time – the discovery of Pharaоh Tutankhamun’s Tomb.

The Tomb of Tutankhamun

The tomb was filled with riches like golden shrines, statues, jewelry, weapons, clothes, and many other artifacts. Tutankhamun’s body was placed in three coffins, the innermost of which was made of solid gold, while the outer two coffins were crafted in wood and covered in gold, along with several semiprecious stones. This was the first time that a royal tomb from the time of ancient Egypt had been discovered so remarkably intact.

Unfortunately for the archaeologists who discovered it, there was a belief that a horrible curse would befall anyone disturbing the tomb of the Pharaоh, and in our video titled “The Book of Thoth Offering Unlimited Knowledge from Other Realms,” we examined the mysterious deaths that followed almost everyone involved with the excavation.

When Howard Carter opened the sarcophagus of the Pharаoh, he found two daggers wrapped around Tutankhamun’s mummified body.

The first dagger was wrapped near Tut’s abdomen and was made entirely of gold with a gold sheet with intricate decorations.

The second dagger was what really fascinated the archaeologists. It was an iron dagger with a golden sheеt and golden handle. 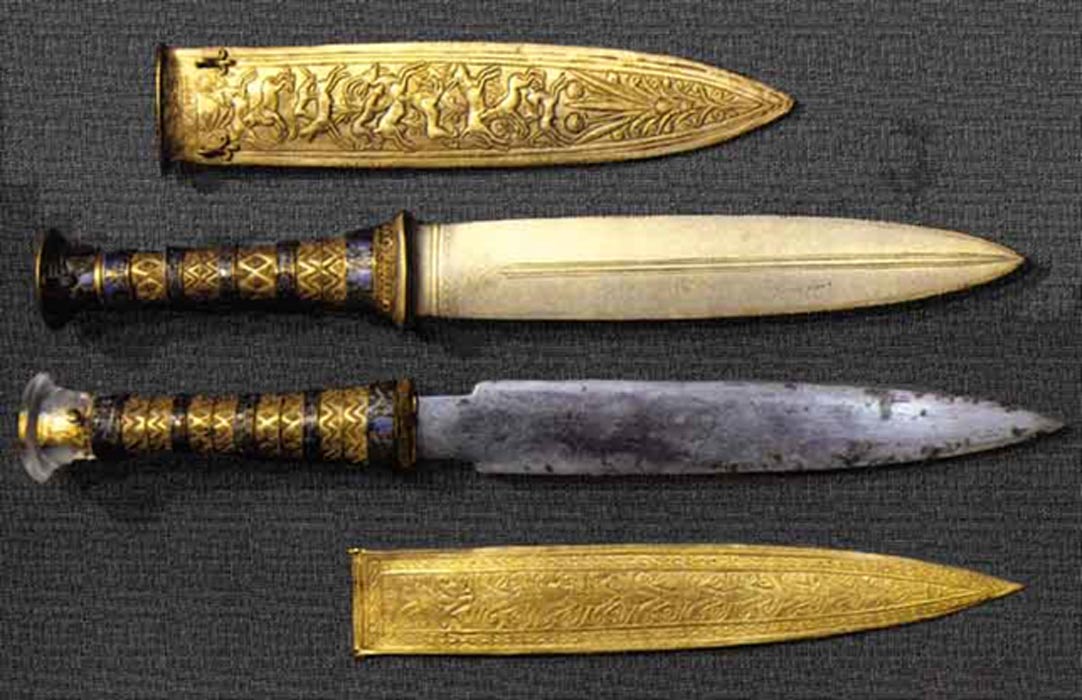 The Dagger of Tutankhamun

Now you may be wondering why would an iron dagger be more impressive than a gold one. The thing is, finding such an elaborate iron weapon during the Bronze Age was very unusual. Iron in this time period was considered more valuable than gold.

Although the deserts of Ancient Egypt were rich in mineral resources, the only materials that the ancients were using and were able to work with were copper, bronze, and gold. The use of iron in the Nile Valley occurred much later, with the first evidence to iron smelting dating to the 1st millennium BC, which is almost half a millennium after the reign of Tutankhamun.

The dagger itself was surprisingly of very high quality. The ancient Egyptians didn’t know anything about iron and how to work it, so how could they create such a delicate and well-manufactured artifact from a metal they had zero experience with?

The thing is, the Egyptians weren’t taking credit for the creation of the dagger. Instead, they referred to it as a “gift from the gods.”

Is it possible that the dagger was indeed a gift to the Pharаоh from some more advanced civilization? How else could a bronze age civilization produce a sophisticated ironwork such as this?

“The problem with ironworking is related to its high melting point (1,538°C) [2800.4°F]. Because of it, early smiths couldn’t heat ore enough to extract iron and couldn’t forge the iron into weapons.”

Tut’s Dagger – An Out of Place Artifact

Researchers who believed in the theories that advanced ancient civilizations existed before the time of Ancient Egypt, and the theory of ancient extraterrestrial visitations, added this artifact to the list of so-called out-of-place artifacts.

Of course, mainstream Еgyptologists couldn’t accept another out-of-place artifact, so they came up with the explanation that the ancient Egyptians extracted the metal from a fallen meteoroid and thus making the dagger.

There are some problems with this theory, however. For example, historians have long concluded that Egyptians didn’t have the technology to extract metal from meteoroids in the bronze age. A fallen meteoroid could have iron, but that iron will not be clustered in one place but spread throughout the object, making it very hard to detect, let alone extract it without advanced technology.

And if we assume that they could somehow extract the metal from the meteoroid, then how did they cast the metal into the dagger, as this was also beyond their capabilities?

Researchers were astonished that the dagger was completely smooth and had absolutely no hammer marks on it. Its edges were very precise, and there were no signs of the traditional metalworking techniques used from that period.

In 1994, an analysis of the dagger’s blade was made by an X-ray fluorescence spectrometry, and it revealed that the dagger was not made of normal meteoritic iron. The alloy that composed it was very complex and durable. It contained 89% iron, and the rest had nickel, cobalt, and chromium. The nickel content was extremely high, making the blade almost immune to rust.

Could the dagger be a legacy left from an older, more advanced civilization? Or perhaps a gift from an extraterrestrial civilization that visited Egypt?

The questions keep piling up, as Tutankhamun’s dagger was not the only unexplained and out-of-place artifact found in the tomb.

There was an intricate breastplate decorated with gold, silver, and various precious jewels. The artifact depicts a winged scarab made from a mysterious yellow-green gemstone. Archaeologists first thought the gemstone was chalcedony, which is a common variety of the mineral quartz.

When the mystery surrounding the alloy of Tutankhamun’s dagger stirred the scientific community, specialists started to examine the composition of all of the artifacts found in the tomb.

Apparently, the scarab in the breastplate was not made from regular chalcedony quartz but from a material that shouldn’t exist in this time period – desert glass. 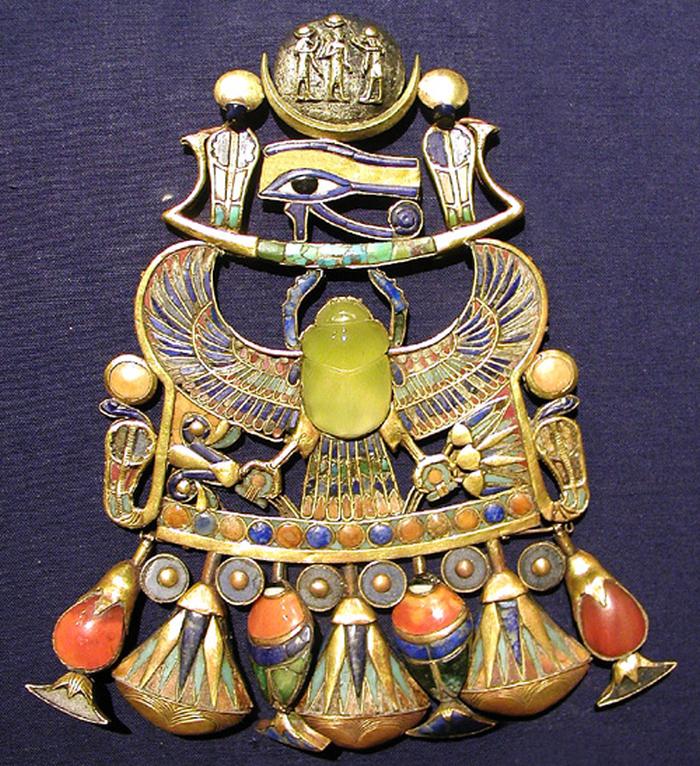 The desert silica glass is a material first discovered in 1945, after the Trinity Test – the first detonation of a nuclear bomb in the history of humanity. Conducted in the remote New Mexico desert, the bomb left a 300-foot crater five feet deep in the desert. To the surprise of scientists, inside of the crater, the rough New Mexico sand had been turned into a smooth sheet of glittering green glass. This meant the bomb generated temperatures of over 3000 degrees Fahrenheit, which is what it’s needed to melt silica sand into glass.

Members of the project team, believing this glass to be a unique, brand-new material found nowhere else on the planet, took the opportunity to name it ‘Trinitite,’ after the Trinity Test.

Mysteriously, the same trinitite or desert glass was discovered in the Libyan desert in large quantities.

In our article and video called “Evidence of Ancient Nuclear Wars – Weapons of the Gods”, we discussed the many clues that suggest the ancient use of nuclear power in remote history, together with compelling evidence of chemical analysis, proving that a nuclear explosion also occurred on the planet Mars.

Like the material from which the dagger of Tutankhamun was made, the Libyan desert glass was also explained by a meteor. 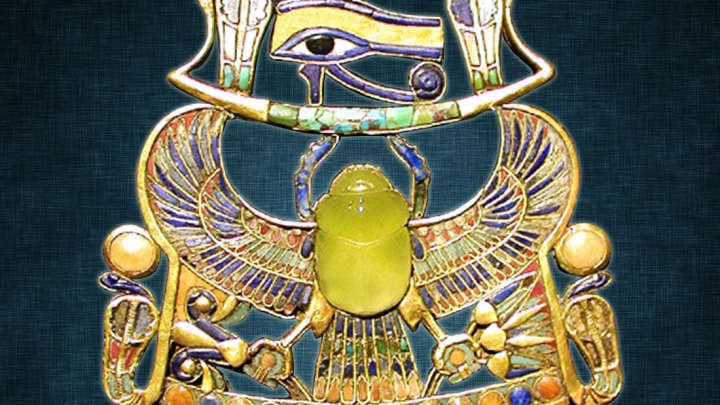 Scientists claimed that a meteor strike was what melted the sand into glass and created this unusual element. The problem with this theory is that the Libyan desert glass was completely pure. If a meteor strike was the cause of its formation, there would be fragments of iron and other minerals in the glass, which was not the case. Also, a meteor strike leaves a crater, and no crater was found in the area where the glass was located, even after using satellite imagery.

Is it possible that this artifact from Tutankhamun’s tomb was also made using material produced by the so-called gods, just like the dagger from a highly advanced alloy? Only the gods were capable of unleashing such a powerful explosion to melt a large field of desert into smooth glass.

No wonder the Egyptians worshipped them so much and were considered one of the most religious societies in history. Wouldn’t you worship beings possessing powers thousands of years more advanced than your own? Powers that seemed so incredible that they could only be perceived as otherworldly and magical?

The question is, who are these gods who gifted humanity with various gifts and boosted the development of ancient civilizations, and where do they come from? Are they responsible for the unexplained megaliths surrounding the planet, like the Pyramids of Giza, the Bosnian Pyramids, Teotihuacan, and all the other gigantic structures?

Or perhaps these structures, together with the artifacts found in Tutankhamun’s tomb, were not from extraterrestrial intelligence but from an advanced ancient human civilization that developed here on Earth.

After all, our history assumes that the human race is wiser and more advanced than ever before, but ancient artifacts and monuments seem to indicate that highly intelligent pre-flood culture may have existed in the very distant past, engineering these structures and creating these artifacts in ways that primitive humans never could.

Perhaps this civilization developed too much and eventually destroyed itself, leaving only the indestructible stone structures we see today. This makes us wonder, are we as a civilization heading on the same path of self-destruction? Our technology is reaching monumental progress while our spiritual and mental development is diminishing. Could this technological progress be dangerous for a civilization that still resorts to war and violence to solve its political problems?

We hope that modern science and archaeology keeps an open mind and explore all possibility regarding ancient discoveries. Rather than suppressing controversial findings, it should examine them more and be open to all possibilities, even if they break the paradigm. We must learn from our history so we don’t repeat it.

“The more you know about the past, the better prepared you are for the future.”