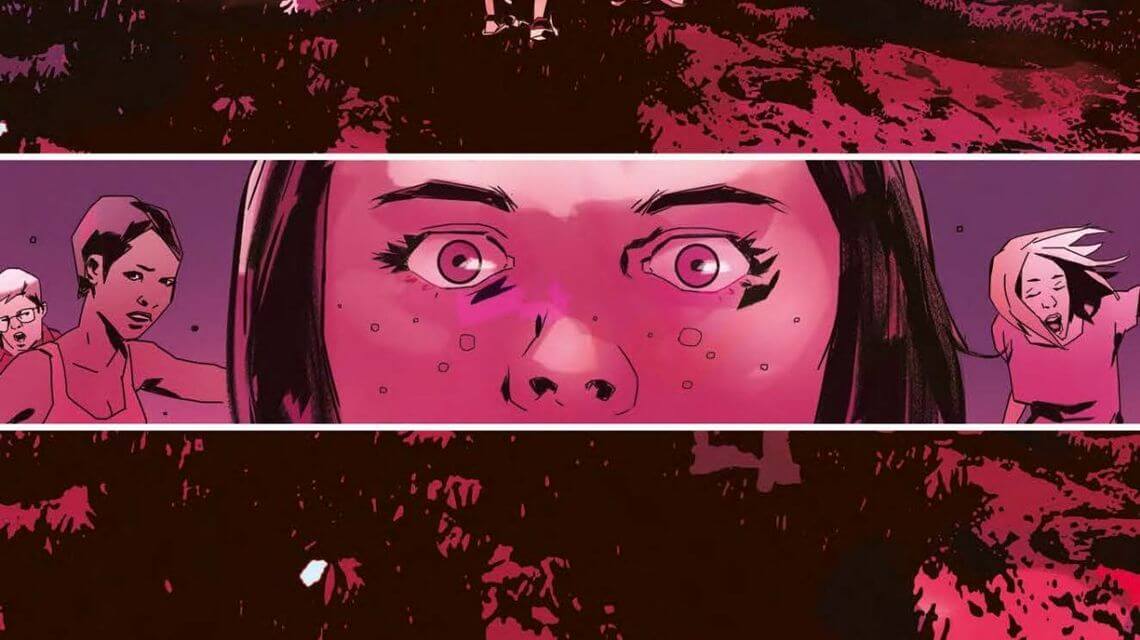 Writer Anthony Cleveland and artist Antonio Fuso didn’t know how much they had in common as sci-fi geeks before they were thrown together for their new alien-abduction mystery Stargazer (Mad Cave). Growing up in Indiana, Cleveland would head to the flea market every weekend to stock up on obscure sci-fi and fantasy books and cheap back issues of comics. Meanwhile, half a world away in Lecce, Italy, Fuso could always be found at his favorite “edicola” (newsstand), perusing work from some of his favorite artists, including Hugo Pratt, Sergio Toppi, and Frank Miller.

Those classic noir influences — which can be seen in Fuso’s work today in titles like WYRD (Dark Comics) and James Bond 007 (Dynamite) — along with his love of science fiction and mysteries, were part of the reason Mad Cave editor-in-chief Chris Sanchez reached out to him for Stargazer.

As for Cleveland, this is his second comic with Mad Cave, as he also penned 2018’s Show’s End after winning a company talent search.

Along with colorist Stefano Simeone (Clankillers), the team premiere the first of their six-issue series Stargazer in early May. Straddling the lines of mystery, horror, and good old-fashioned alien abduction, the story is told from multiple perspectives and time periods. The plot centers on Kenny, a teen with autism whose inexplicable disappearance (and subsequent return) leaves his family and friends grasping for answers. Stargazer also focuses on a team of scientists who are investigating paranormal activity happening around the world, including a whale that has somehow been beached … in the desert. This is the stuff of SCP legend.

Cleveland’s own family experience inspired Kenny’s character, as Cleveland’s brother, with whom he’s very close, also has special needs. He knows firsthand how mental illness can be stigmatized, even in the face of traumatic events like what Kenny goes through in the story. Fuso and Simeone’s bubblegum-pink palette works to ease the heaviness of the story throughout the project, and highlights moments of levity and fun in the story, especially between flashback scenes.

SYFY WIRE spoke with the Stargazer’s creative team and discovered how RPGs, family, and even sleepwalking inspired this story.

Where did your fascination with aliens and abductions originate?

Anthony Cleveland: I didn’t figure this out until later in my life, but I used to sleepwalk as a kid. One of the things I must’ve seen while sleepwalking was flashing siren lights or something. But in that state, I interpreted it as spaceships over my neighbor’s house.

For years, I was convinced UFOs were out there, and I was terrified.

You are known for your noir style work on dark detective series like WYRD and James Bond — what was it like lending your art to a story with a younger protagonist?

Antonio Fuso: It was cool. I love applying a noir style to different genres; it creates an interesting dissonance. I did superhero books in the past and more recently a fantasy series. Maybe in the future, I can do the same thing with a Western!

What was the inspiration for this story?

AC: A lot of it came from fears that I had in the ’90s. The end of the world, drugs, and of course, aliens. The mid-’90s had a steady stream of UFO television shows like X-Files, Unsolved Mysteries, and other docu-series. Honestly, a steady stream of paranormal and UFO shows on the Sci-Fi Channel [now SYFY] probably contributed to it, also!

I love to find a new story and just let my mind spin with a bunch of new ideas. I look forward to restless nights when my mind won’t shut up.

Kenny is on the autism spectrum. Was it difficult to write a character with autism?

AC: My brother is special needs, and a lot of stuff with Kenny and [his sister] Shae comes from my brother and me, but most of it was from other interactions I saw between siblings growing up. With Stargazer, I thought it was important to focus on the relationship between those siblings, rather than whatever disability may be there.

Shae’s trauma is tied to her brother’s disappearance as well as what appears to be the loss of her wife. Are they connected?

AC: It’s a trauma that we’ll come back to frequently, and it parallels a lot of her problems she’s facing in this stage of her life. As for mysterious … all I’ll say is “sort of.”

Is the Quest RPG that the kids are playing at the beginning of the story a metaphor for the whole plot?

AC: It was originally just to be another layer to put us in their world, but it did grow into something like that. We don’t get too far into the world of the game, but we do recognize the world as a safe space for them that we get to completely dive into with Issue #6.

Would you consider Stargazer a horror story or a sci-fi mystery?

AC: It genre-hops and I like that. It will keep you on your toes as you try to sort out the bigger picture with our main character. Genre tropes aside, at the end of the day it’s a family drama about facing trauma and moving toward acceptance of some hard-to-swallow truths.

Since this is a brand-new series, what are you most excited for readers to see?

AC: I truly enjoyed crafting the personal stakes for each character in comparison to the massive cosmic conflict going on above their heads. What comes from that is an emotional story that I can’t wait to see readers respond to.

Plus, there’s a great page caption and reveal of something big on the last page. The art and color sell this page so well.

AF: Anthony does an amazing job blending the feel of a vintage blockbuster with all of the impact of a modern-day sci-fi thriller. You’ll love this book as much as I love working on it.

Thia reminds me me so much about Mary Rodwell’s research on special needs children , I suggest you check out her Research on Children and Alien  Connection  they are special and see things differently than most of us. Usually, what we can’t understand we label as something  else and brush them aside but they are  here for a reason to.

Love and Regards, DO NOT GET TO LAX ON  QUARANTINE AND PROTECTING YOURSELF FROM THE COVID 19 VIRUS ,  JUST BECAUSE SOME THINGS ARE OPENING UP FOR BUSINESS AND THE WEATHER HERE IN THE UNITED STATES IS SUNNY AND WARMER AND SCHOLL YEAR IS FINISHED HERE. LET’S  NOT GET OURSELVES I  A SITUATION AGAIN  !