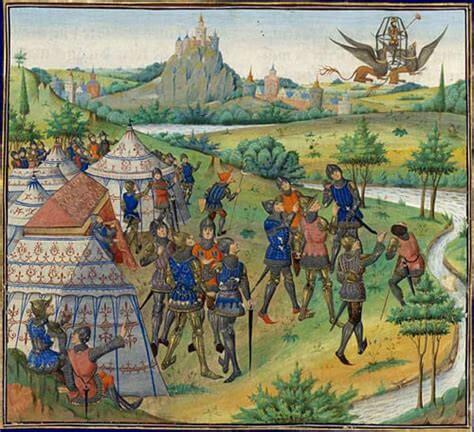 Alexander The Great“The first recorded incident regarding Alexander the Great and UFO’s was recorded in 329BC. Alexander decided to invade India and was attempting to cross the river Indus to engage the Indian army when “gleaming silver shields” swooped down and made several passes over the battle.

Seven years later Alexander was confronted with the greatest challenge of his military career. In his attempt to conquer the Persian Empire he realized that the city of Tyre needed to be captured in order to prevent the Persians from using that port to land an army behind him.

The original coastal city of Tyre had been destroyed before and had been rebuilt some distance offshore from its original site. Having no navy, Alexander decided to use the remains of the old city to build a causeway to the new one.

It took Alexander six full months to do this and when the task was completed and his troops staged their assault they were easily rebuffed because the walls were too high to quickly scale and too thick to batter down. Not only that but the causeway was too narrow to allow sufficient troops to launch a massive enough attack to overwhelm the enemy in order to scale the walls.

Not only was this a problem for Alexander but apparently a problem for God as well. Both the prophets Ezekiel and Isaiah had spoken of Gods’ curse and eventual destruction of Tyre. (Ezekiel Chapters 27 & 28 and Isaiah Chapter 23). How was Alexander going to achieve his goal? How was God going to ensure that His prophecy would be fulfilled?

The historical account, recorded by Alexander’s chief historian, states that, during an attack of the island city, one of two ‘gleaming silver shields’ attacked a section of the wall with a ‘beam of light’ which subsequently caused that section of the wall to fall! Alexander’s’ men poured through the opening and captured the city.

What is so noteworthy about this encounter is the fact that the historians for the defeated people of Tyre reported the exact same reason for the loss of their city! Usually, the reason given by a defeated people is different than that given by the victors, but in this instance their accounts read the same.

Before he started his major offensive against Persia Alexander sought the advice of an oracle in a temple located in the desert. He set off, with a small party of men, but miscalculated the logistics and found himself hopelessly out of water and dying of thirst.

Almost miraculously, a rare, but unusually strong rain cloud burst overhead and gave him and his men sufficient water to safely complete their journey. No one reported seeing any ‘gleaming silver shields’ but here again is a case of a wondrous “cloud” that we see so many occurrences of in the Bible.

This remarkable incident was apparently paralleled by an equally fantastic visitation during the Siege of Tyre by Alexander in 332 BC. Quoting Giovanni Gustavo Droysens Storia di Alessandro il Grande, the erudite Italian Alberto Fenoglio, writes in CLYPEUS Anno 111, No 2, a startling revelation which we now translate

‘The fortress would not yeld, its walls were fifty feet high and constructed so solidly that no siege-engine was able to damage it. The Tyrians disposed of the greatest technicians and builders of war-machines of the time and they intercepted in the air the incendiary arrows and projectiles hurled by the catapults on the city.

One day suddenly there appeared over the Macedonian camp these “flying shields”, as they had been called, which flew in triangular formation led by an exceedingly large one, the others were smaller by almost a half. In all there were five. The unknown chronicler narrates that they circled slowly over Tyre while thousands of warriors on both sides stood and watched them in astonishment. Suddenly from the largest “shield” came a lightning-flash that struck the walls, these crumbled, other flashes followed and walls and towers dissolved, as if they had been built of mud, leaving the way open for the besiegers who poured like an avalanche through the breeches. The “flying shields” hovered over the city until it was completely stormed then they very swiftly disappeared aloft, soon melting into the blue sky.’120“