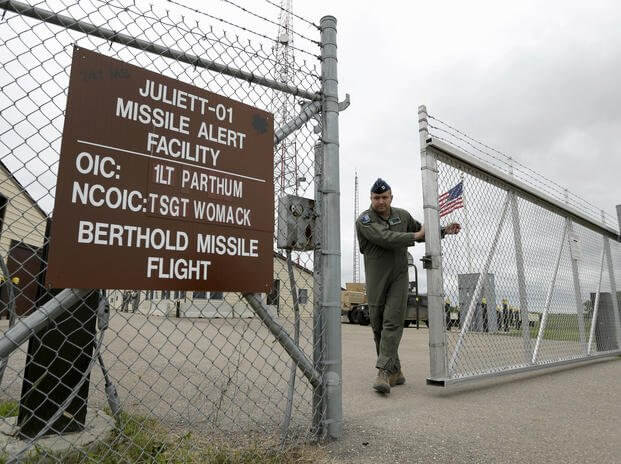 Three aging Air Force veterans came to Washington, D.C., on Tuesday to again tell their strange and extraordinary stories. A fourth veteran was piped into the National Press Club conference by video feed from the Ozark Mountains in Missouri.

Each veteran’s story is different, but all share one central claim: In the 1960s, UFOs tampered with nuclear weapons managed by the Air Force, both terrifying and mystifying the airmen who experienced the encounters. Some remained silent for decades, they say.

And none has captured the attention of Washington, even as reports of Navy encounters with unknown flying objects have splashed across national headlines and pushed UFOs back into the political mainstream for the first time in decades.

“I waited 40 years before I opened my mouth, and that’s a long time,” said David Schindele, a retired captain who served as a nuclear missile launch control officer at Minot Air Force Base in North Dakota. “I had this terrible secret on my mind for all that time, and I felt such great relief to finally admit to my friends and close relatives what I experienced in the Air Force.”

Other accounts, such as the story told by veteran Robert Salas of a glowing red-orange craft hovering at the gate of a Minuteman intercontinental ballistic missile silo in Montana, have been told for decades and folded into the growing universe of UFO lore. Salas was part of a similar press conference in the same downtown press club in 2010.

Through the years, the government remained indifferent at best to decades-old reports of saucer craft toying with the world’s most powerful weapons during the Cold War. The Air Force funded a university study commonly known as the Condon Report in the 1960s, which found no evidence to support the claims — and recommended against further studies.

But it is a different Capitol for Salas and his fellow true-believer veterans in 2021. The UFOs they claim appeared in the 1960s have been eclipsed by the more recent accounts of Navy witnesses and fighter jet footage of what the Pentagon now calls unexplained aerial phenomenon, or UAP.

Salas has spent years gathering other Air Force veterans who have signed witness affidavits describing their own alleged encounters decades ago. He claims the evidence shows UFOs appeared at various times and took 20 Minuteman ICBMs off-line at sites in the central U.S. over an eight-day period.

“Never had we seen a situation like this,” Schindele explained.

Schindele said he and his commander visited a missile launch site near Minot in September 1966, and eight airmen there told him that 10 missiles at silos in the vicinity all went down with guidance and control malfunctions when an 80- to 100-foot wide flying object with bright flashing lights had hovered over the site.

Salas, who was a first lieutenant stationed at Malmstrom Air Force Base, Montana, in 1967, said he was on duty as a deputy missile combat crew commander deep in the underground nuclear missile control room. The site’s flight security controller called from above ground and was panicked and shouting, Salas claims.

“He said there was a large glowing, pulsating red oval-shaped object hovering over the front gate,” according to Salas’ affidavit. As he woke his commander, he claims alarms went off showing nearly all 10 missiles shown in the control room had been disabled.

Robert Jacobs, who attended the UFO press conference via video link from Missouri, said he was a first lieutenant in the Air Force and stationed at Vandenberg Air Force Base, California, in 1964 when he was asked to set up a telescope video camera to capture an Atlas rocket test.

He claims the video showed a disc-shaped craft flew up to the dummy warhead as it traveled about 8,000 mph over the Pacific Ocean, circled it and shot it with several beams of light.

Jacobs, who once shopped around the story and eventually sold it to the National Enquirer tabloid, said the film footage was cut and taken at the time by two men in gray suits, and his commander ordered him not to talk about it.

Meanwhile, the UAP cockpit footage from Navy encounters in the Pacific in 2004 and Atlantic in 2015 appear to back up eyewitness accounts from pilots who reported a craft that looked like a giant white “Tic Tac” flying without wings or propulsion systems, and a flying cube inside a clear sphere that passed between two fighter jets.

The encounters by naval aviators, first revealed in 2017, were followed by official acknowledgment from the Navy. The disclosures caused alarm on Capitol Hill, where some lawmakers worried China or Russia had leapfrogged U.S. defense technology. Congress ordered a report in June on what was known about UAPs.

The initial assessment from the Office of the Director of National Intelligence was inconclusive, saying not enough data exists to determine the nature of UAPs but that they may present a national security risk.

Salas called it a stunning admission. The veterans gathered at the press conference Tuesday pointed to the ODNI report as a potential breakthrough in their own unacknowledged accounts.

“I have certainly never seen anything like this before,” Salas said of the report. “This is real. It’s not visionary, it’s not swamp gas, and so where do we go from here?”

For the Pentagon, it means reorganizing to better collect and analyze UAP data. Deputy Secretary of Defense Kathleen Hicks ordered up a plan and potential overhaul of the UAP Task Force headed by Navy Secretary Carlos Del Toro.

The Pentagon has declined to provide any public updates on the process. The Navy deferred any questions for Del Toro this week and said only the Pentagon could speak on the issue.

Whether Salas, Schindele, Jacobs and other Air Force veterans who had made similar claims will succeed in convincing others to take their assertions seriously remains a question mark.

“Have we been ignored? For God sakes, we’ve been shut up and silenced,” Jacobs said. “We’ve been ridiculed; we’ve had our lives disrupted. This is more than just being ignored. We’ve been treated like imbeciles.”