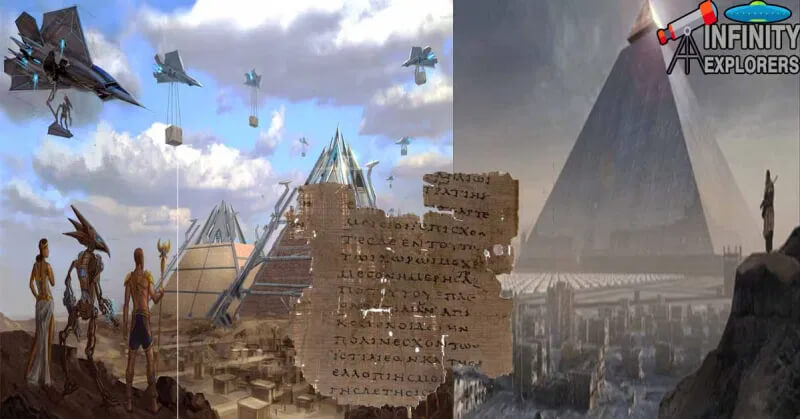 People have always remain fascinated with the pyramids of Egypt, and they cannot be blamed either considering the mysteries surrounding their construction.
You probably don’t believe the conspiracy theories that say they were built by aliens, but they weren’t built by slave labor, either.
So how did people 4,000 years ago create some of the largest, most iconic structures on Earth?
The mystery of how, exactly, the pyramids were built may be a step closer to be solved. Did machines built the Pyramids of Egypt?

The Greek philosopher and historian, Herodotus, composed “The Histories” in 440 BC which is considered one of his most important works.
In it, the great historian mentions the ancient records and traditions, from politics, geography, and customs known in Western Asia, North Africa, and Greece.
“The Histories” was so transcendent that it laid the foundations for historical study in our society.

However, it is possible that among his lyrics he hides the truth about an enigma that humanity has been trying to solve for years.

Pyramids Of Egypt And The Mystery Associated With It

The Egyptian pyramids are ancient pyramid-shaped masonry structures located in Egypt. As of November 2008, sources cite either 118 or 138 as the number of identified Egyptian pyramids.
Most were built as tombs for the country’s pharaohs and their consorts during the Old and Middle Kingdom periods.

The first-ever Pyramid in Egypt was erected during the Third Dynasty, under the reign of Pharaoh Djoser.
The stone-built building that rose in steps was the beginning of unique architecture.

The Step Pyramid of Djoser, second king of the 3rd dynasty, was built within a vast enclosure on a commanding site at Ṣaqqārah, overlooking the city of Memphis.

Built as a tomb for the pharaoh Djoser (or Zoser), the Djoser Pyramid was constructed between 2630 BC and 2611 BC in Saqqara, Egypt.
Although it is considered the world’s oldest intact large-scale stone monument, the ancient structure is often overshadowed by Egypt’s most famous pyramids.
The pyramid was 60 meters high, and it is believed that it was built in stages; the first, the square part of its base, to a sixth that ended at its top.

However, it wasn’t until the arrival of Sneferu to the throne that the pyramid was redesigned.
This pharaoh erected three pyramids that totally changed the structure and designs of Pyramids.

Surprisingly, it is believed by experts that the Red Pyramid built in the royal necropolis of Dahshur, was the model used for the Great Pyramid of Giza.

With the passage of time, these Great Pyramids became the center of attraction and also a tourist place.
However, no record of their construction has been found neither any clarity has been gained over the fact that how and who erected these magnificent buildings.

There is not a single ancient text in Egypt that mentions how they were built.
This has become one of the most baffling mysteries not only in archeology but also in society in general.

It is popularly known that with the arrival of Cheops, a new era began in terms of the construction of pyramids.
Jufu, Jéops, better known as Cheops, was the second pharaoh of the fourth dynasty, belonging to the Old Kingdom of Egypt and he reigned from 2589 BC to 2566 BC. C.

The credit of erection of the Great Pyramid of Giza goes to Cheapos as Cheops, together with the architect Hemiunu, erected this building in, supposedly, 20 years.
According to Herodotus:

“Cheops had the Great Pyramid of Giza built “, reaching the height of implausibility-  even prostituting his own daughter, in order to obtain funds with which to build his pyramid … in his time all the temples were closed to worship and Egypt was in the greatest destitution, being detested by the Egyptians.”

Since no document has been discovered so it is believed that it is merely a theory that has been accepted by archeology since there is no document that supports it.

The Great Pyramid of Giza has a total volume of 2,583,283 cubic meters and it is the third-largest in the world in terms of volume, but it’s 146.7 meters high, making it the tallest.

However, the most surprising and incomprehensible fact to experts associated with the Great Pyramid is the precision with which it is built.
Those in charge of building the pyramids erected them with such sophisticated precision that it is not even possible to replicate the building in modern days.

The most interesting part is that it is one of the most advanced works in terrestrial history and yet nobody has documented them.
Well, it is possible that there is a document that talks about the work done to build them, although it appeared 2,000 years later.

In his work ‘The Histories”, Herodotus mentions the possible advanced devices or machines that were used during the construction of at least the Great Pyramid of Giza.

The text says that, after placing the stones of the base, some “machines” were used to place those that went on it.
However, Herodotus himself is unsure about the numbers of machines that were used to erect the pyramids of Egypt.

The textual extract of ‘The Stories:

“The pyramid was built on steps, in the form of battlements, as it is called, or, according to others, in the form of a tall one.
After placing the stones for the base, they put the remaining stones in place by means of machines …

… The first machine lifted them off the ground to the top of the first step. On top of this was another machine, which received the stone upon its arrival and carried it to the second step, from where a third machine advanced it even higher.

Either they had as many machines as there were steps in the pyramid, or possibly they had only one machine, which, being easily moved, transferred from one layer to another as the stone climbed; both reports are provided and therefore I mention both… “

It is assumed by historians that Herodotus obtained this knowledge from priests he visited in Egypt.
What did Herodotus mean by “machines that lifted the stones and put them in their place?”

The lines that sound more like a conspiracy theory, are actually officially written words by one of humanity’s most important historians.
Is this ancient text another piece of evidence that proves that the ancient Egyptians had the support of a totally unknown advanced technology or they themselves possessed advanced technology and knowledge?

This even leads to thinking that all the pyramids on the planet were built with these possible machines.
There are many possibilities; perhaps those responsible for bringing this technology took them away when the job was finished.
This would explain why no trace has been found.
The perfect construction of the pyramids has led many to believe that mere humans were unable to erect them on their own and the words of such an important character in history only further reinforce these theories.

What do you guys think ? Did Machines Built The Pyramids Of Egypt? We have linked an interesting video regarding The Manna Machine: The Mysterious Alien Machine That Produced Food In The Desert For Moses And Jews.