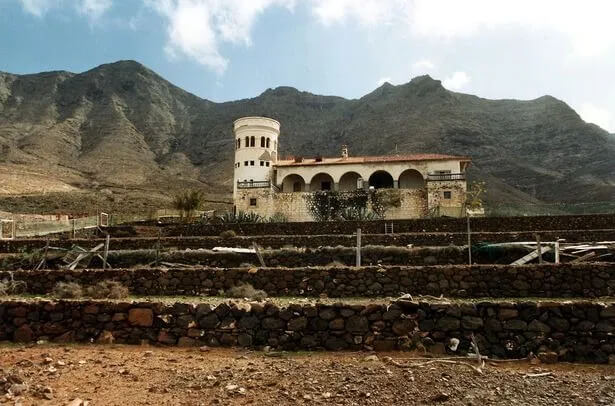 Recently, the creators of the British documentary series “Secret bases of the Nazis” interviewed Pedro Fumero, the owner of a strange villa on the Canary island of Fuerteventura. Fearful rumors have been associated with this villa for decades.

A building called Casa Winter in Fuerteventura (Canary Archipelago) is the place where, according to numerous local rumors, on the run Nazis, including Adolf Hitler , underwent plastic surgery to change their appearance.

This villa looks rather gloomy and in fact, there are rooms lined with characteristic white tiles, which supposedly once housed surgical operating rooms.

You might think that these are just fantasies, but for an ordinary Spanish villa, rooms with a similar design are completely uncharacteristic and these rooms were definitely not used as a bathroom or toilet.

For decades, there have been rumors that Nazis escaped from fallen Germany, including Martin Bormann, Joseph Mengele, and Adolf Hitler were hiding in this villa. Here they waited for a while, they underwent plastic surgery on their faces, and then they left on to South America, hiding from justice.

The official version says that Adolf Hitler committed suicide by shooting himself in his bunker in May 1945, when the Soviet army captured Berlin. However, immediately after his death, legends arose that one of Hitler’s many doubles was killed and that he himself fled through secret tunnels from the city.

Since Hitler’s corpse was burned and practically nothing remained of it (except for a piece of jaw, which is now allegedly kept in a secret FSB safe), it is considered impossible to verify the authenticity of Hitler’s death.

The current owner of Casa Winter, Pedro Fumero, recently gave an interview to the creators of the British documentary television series Secret Nazi Bases. He told and showed them several rooms with white tiles on the walls, which are extremely similar to the former operating theaters. These rooms do not have windows or any furniture.

Also, along the entire length of the villa, there is a strange hidden tunnel with a small window at one end. It is difficult to understand how it was used, perhaps it was walked by those who did not want to be seen once again, even by the inhabitants of the villa.

“The house also has a bunker, prison cells, an autopsy table and ovens that look like crematorium ovens. The walls are so thick that they can even withstand a bomb explosion,” says Fumero.

The basement walls of the villa are also unusually thick and solid, just over 1.5 meters thick.

The builder of the villa is the German engineer Gustav Winter, who during his lifetime often heard accusations against him that he built a base for the fugitive Nazis. Each time, he stubbornly denied any such rumors.