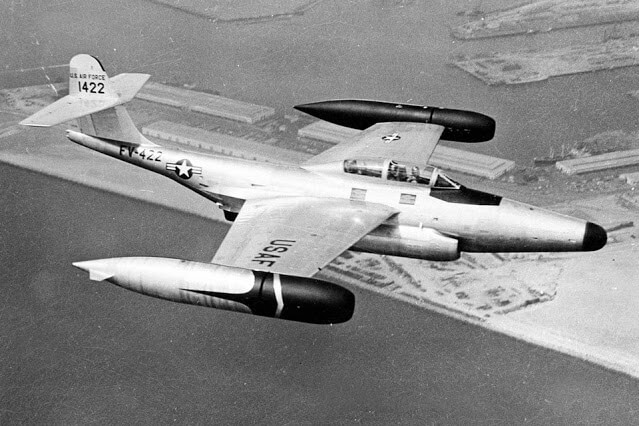 It stands to reason that a report of a UFO that flies circles around a jet fighter doesn’t seem logical. In fact, it’s absurd. Nothing like that could possibly be real.

Except when it’s actually reported by not one but two different pilots.

In the files of Project Blue Book is such an incident that the USAF admitted defied logic.

The main record card for the case: 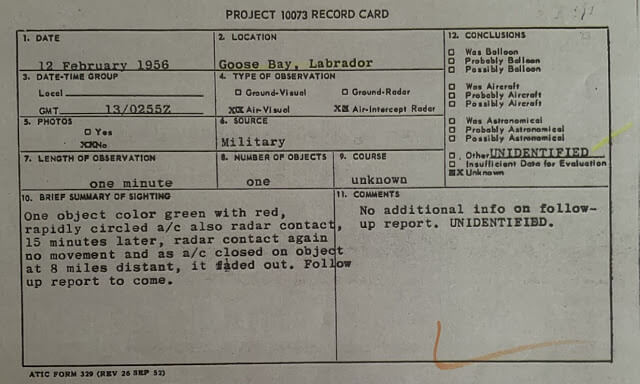 On February 13, 1956, at 0255Z (or before midnight on February 12, 1956), two F-89 jet fighters were 40 miles southeast of Goose Bay, Labrador, on a routine training mission. One fighter aircraft, a F-89D Scorpion, acquired visual and radar contact with an object that “rapidly circled” the F-89D, which was flying at 260 knots and an altitude of 20,000 feet. The object had green and red lights that were flashing. It was estimated to be ¾ mile away.

The object was observed visually for about one minute, and during this time, the second F-89 pilot also had radar contact with it. About 15 seconds after the pilots encountered the object, air traffic controllers monitoring the situation reported radar contact with the same or another object, noting that it was stationary, about 38 miles southwest of Goose Bay.

The fighter aircraft were then both vectored to head for the object that had appeared on the ATC radar scope. The aircraft radar locked on to this object but the target faded when the aircraft got within eight miles of it.

The weather at the time was clear visibility of 20 miles, with some ice crystals.

The report noted: “Sighting cannot be correlated with any known FRD activity,”

We don’t have any information on what was done in terms of investigation at the time, but almost ten years later, some kind of review of the case was made. A note from the USAF Foreign Technology Division at Wright-Patterson AFB, dated 11 February 1965, read:

“The information in this report is too incomplete for an evaluation to be made. It is not logical for a genuine target to ‘fade’ and disappear when the fighter gets close to it – the normal situation is for the target to get stronger the closer the fighter gets to it.” [NB: emphasis in original] 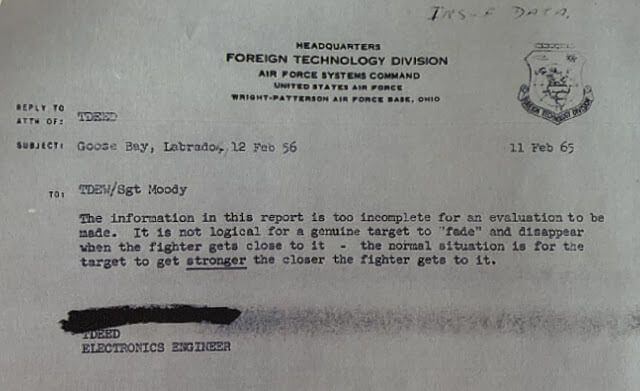 Despite this, the original report is labeled “UNIDENTIFIED.”