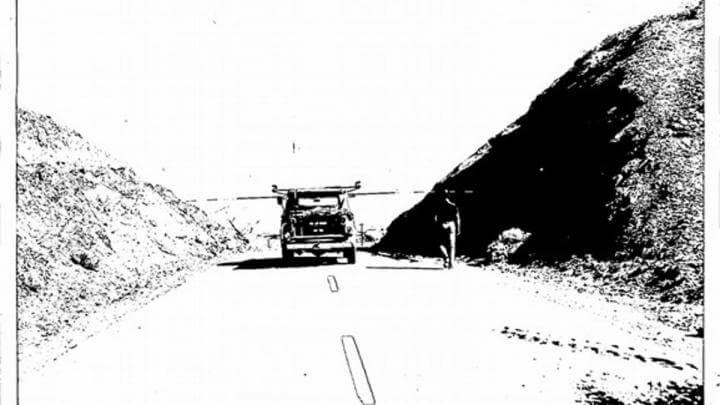 An anonymously authored report went out to a cadre in the upper crust of U.S. intelligence, military and private-contracting on Aug. 30, 1961. They kept it secret from everyone else for more than five decades.

The report details a route through which four trucks could traverse the Inland Empire and Mojave Desert. The value of the cargo carried by these trucks appears to have been incalculable: Sensitive enough to coordinate multiple state highway patrol escorts, and massive enough to require special government permits for blanketing all two-lane roads in their path.

The convoy’s mission, despite its cartoonishly noticeable presence, was to avoid any engagement or curiosity from the outside world. A smooth ride was the top priority, even if it meant moving highway signs, shaving the slope of uphill roads and trimming trees throughout the roughly 450-mile journey.

The route began a few miles north of Hollywood at Lockheed Martin Corp.’s now-former site for top-secret, experimental aircraft development: The “Skunk Works” facility. From there, overnight stays in Barstow and Shoshone were central to the meticulous blueprint. It ended in southern Nevada, at what is now among the most popular locations in American UFO lore.

“MOVEMENT OF TEST ARTICLE FROM B*6 TO AREA 51,” the report’s opening subject-line reads. Ambiguity persists throughout in a document that offers details only on a need-to-know basis.

A change of tone

The Central Intelligence Agency declassified this report on Sept. 11, 2013 — more than 52 years after it was written — and made it publicly available online for the first time a few years later.

Yet, the report has seemingly slipped through the cracks in media and ufology circles ever since. The CIA had been releasing troves of files along similar line for three weeks before it declassified the “B*6-to-Area 51” roadmap.

The admittance gave fuel to ufologists and military-history buffs alike after decades of pressing the issue — though often for different reasons. Some view Area 51 as a site for development and testing of advanced but exclusively-earthly technology. Others theorize that it’s home to literal alien bodies.

The 2013 document-release arrived in response to a Freedom of Information Act request from the National Security Archive at George Washington University.

The request didn’t mention Area 51 but covered the CIA’s Lockheed U-2 spy plane program — used during the Cold War to spy on the Soviet Union, Cuba and other regions with aerial technology no one else had at the time.

Documents released in response to George Washington University’s request showed that the military used Area 51 for decades, beginning in 1955, to test the U-2 and its successor, the A-12 OXCART. Both planes were created at Lockheed Martin’s former Skunk Works facility.

The formerly classified “B*6-to-Area-51” route began at Lockheed Martin’s former Skunk Works facility in Burbank. The Bethesda, Maryland-based aerospace and arms company used this site for top-secret work throughout the Cold War, but it moved those operations to Palmdale in the 1990s.

“The problem with Skunk Works’ programs is that they typically get credit for changing history long after they actually change history,” a program manager once said, according to Lockheed’s website.

In 2021, the Pentagon is departing from a longtime dismissal of UFO-talk. The military this year has stated that multiple videos of what it calls “unidentified aerial phenomena” are real, encouraged personnel to report “sightings” for the first time, and taken other legitimizing actions.

The sudden change-of-tone lends a present-day fascination to the 1961 “B*6 to Area 51” roadmap for High Desert residents specifically, and the world in general.

‘Traveling on a special permit’

The August 1961 report’s unnamed authors describe test-runs they’d conducted from Skunk Works to Area 51 over the prior two years while hauling the specific “test article” that the report centered around.

The authors offer little detail to clarify exactly what the cargo was, or why it was so important. Presumably, their original recipients either already knew or were themselves not allowed to know. They do make one thing clear: This was a big haul.

“All four of these trucks were over width, traveling on a special permit,” the report states.

The authors attached various grainy photos that they said were taken at prominent checkpoints during those runs. One photo referenced in the report is said to have been taken of a fenced area for parking at Barstow Diesel Service, where the convoy spent its first night.

Three of the trucks each carried one piece of the overall “test article,” as the report describes it. Each object would be reassembled into the whole form when the trucks arrived at Area 51, and “the fourth truck had the turn-over jigs and fixtures” needed for that reassembly, the report states.

One truck carried a piece of the test article measuring 32.5 feet wide and 63 feet long, according to the report, which calls this “the largest package” but doesn’t describe it further.

The second truck’s haul measured to 22 feet wide and 30 feet long. These were “the outer panels” of the test article.

The authors identified multiple changes to the landscape that curated their convoy’s route, including that:

A fear of standing out to casual passersby during the 1961 voyage appears to have held merit. The authors at one point indirectly inject an element of slapstick comedy into the report by describing one series of unfortunate events they faced on the initial test run in 1959.

“We had a serious problem on the hills with a couple of the trucks dropping down to 4 to 8 miles per hour,” the report states. “This caused the traffic to build up behind the convoy and made it necessary for the State Highway Patrol cars to pull the convoy off the highway, into a clearing, to allow the general traffic to pass.

“This makes it real difficult to get started again, especially on a hill with such a large and heavily loaded truck. This then would cause us to continue our move at a slow rate of speed on most of the long hills, such as the Highway 99 ridge route, and again out of Baker to Shoshone.”

The B*6-to-Area-51 blueprint relied on highway patrol escorts to mitigate hiccups like this.

With the Nevada patrol now maintaining its cover, the convoy entered its final stretch. The trucks were to travel through a nuclear weapons testing site run by the Atomic Energy Commission, the report says, then through the town of Mercury, Nevada. That led to its destination: “Groom Lake, Area 51.”

‘All sorts of weird stuff’

The report describes this as not a one-time roadmap, but a route likely to be traveled as standard practice by top-secret trucks in the future.

“This type of convoy is required to travel in daylight hours Tuesday, Wednesday and Thursday. Not allowed to travel on Holidays or Friday, Saturday, Sunday or Monday because of heavy public traffic on these days.”

Steve Smith — who has lived in Barstow since 1979 and worked with the Mojave River Valley Museum for two decades — is well-acquainted with UFO lore in the High Desert.

“Post-World War II, we had all sorts of weird stuff going on in the sky here in Barstow,” Smith said in an interview.

One story Smith describes ties into perhaps the most famous incident in American UFO lore: The 1947 Roswell, New Mexico affair, in which rancher William “Mac” Brazel found a massive collection of debris he described as metal-like material that didn’t conform with any metal he’d seen or held before.

Military personnel scooped up the material in Roswell and, in following days, said the material was merely a crashed weather balloon. The story has faced push back ever since, with witnesses from the time claiming the government conducted various acts of what some now call “fake news” to cover up the real source of the debris.

One day before the Roswell incident, according to Smith, the High Desert had its own alleged UFO encounter. A group of high-schoolers claimed that as they sat atop B Hill in Barstow that day, Smith said, “they saw an airplane chase a UFO across the sky.”

Yet, with this and other eerie tales originating from 20th-century Barstow, Smith said an important point to remember is the city’s proximity to various military stations. He specifically highlighted its direct connection to the Fort Irwin National Training Center and a major Marine Corps Logistics Base, both of which began taking their current form around 1942.

Smith claims the local newspaper covering Barstow in the decades following this time was often censored by the military when reporting on the development of these bases, as well as on seemingly paranormal events that locals described at the time.

He finds the “B*6-to-Area-51” report fascinating, but says he is not buying an extraterrestrial answer to its mysteries.

Rather than alien UFOs, Smith thinks the item being transferred was “probably something from JPL,” referencing NASA’s Jet Propulsion Laboratory in Pasadena.

Smith added that the report reminds him of something he consistently encountered when he worked as a ghost-tour guide a couple years back. After getting off work between 10 p.m. and 11 p.m. on Saturday nights, he always took Interstate 15.

“Literally every time I would do that — and I know other people who can testify to this — there would be a white semi-truck going towards L.A. with no company markings, and no chemical markings or anything like that, flashing its hazard-lights and driving the speed limit,” Smith said.