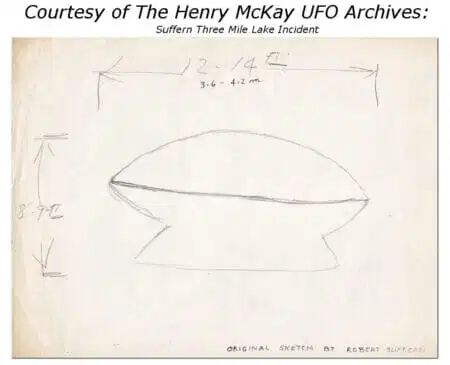 One of the most exciting UFO sighting cases is from the archives of ufologist Henry McKay that involves a spaceship, a strange creature, and a call from the White House. A resident from Three Mile Lake, Ontario claimed to have encountered a spaceship on October 7, 1975, near Ontario and also saw a creature of the size of a small child.

The story begins when Robert Suffern, a 27-year old carpenter received a call from his sister. She was concerned about the glowing orange lights that were coming from the nearby barn. She thought that the barn was on fire, so she asked her brother to check it.

At around 8 o’clock, Suffern went to look for the strange lights. As he was driving down on gravel side road, he was amazed by seeing a saucer-shaped object around 150 feet from his car on the road that led to a lake. The craft was reportedly 13 feet in diameter and approximately 8 meters high. Besides, he did not see any light or any entities inside the ship.

Suffern said that the bottom of the craft had the dull side of aluminum foil wrap with “a narrow dark band around the edge of the clam-like portion of the structure.”

While he was looking at the strange ship, it took off without making any noise of propulsion engine, and no dust was raised. “It went straight up and over the trees,” he said.

The incident scared the Suffern, so he decided to return straight back to his home without meeting his sister. Not so long after he left, he saw a 4-foot tall humanoid figure with unusual shoulders that were quite broad in comparison to its body. The entity was wearing a silver-gray suit with a light-colored helmet on its head.

Suffern stopped his car a few inches from the creature which ran to the edge of the road, jumped over the fence, and disappeared into the field. According to Suffern, the creature acted like an ape because as it reached the fence, it climbed over it effortlessly.

The strangeness did not end there. Suffern returned home and noticed that his TV was not working well. Surprisingly, he again watched a UFO, hovering near his property. He continued observing the glowing lights, moving out over Three Mile Lake and vanished behind Balthaycock Island.

“It’s all right to think what you would do if you came face to face with a situation like this,” he said. “But when it actually happens, you are scared because you are dealing with the unknown. I mean what do you do if they come to the door—offer them beer?”

Dr. J Allen Hynek, who operated the Project Blue Book, contacted Henry McKay and requested him to investigate the case. McKay was a pioneer Ufologist who specialized in physical traces of UFOs & the first Director of MUFON Canada.

Mckay arrived at the scene in less than 48 hours and started his investigation. According to him, there were no traces of any craft. All he found was the skid marks left by Suffern’s car on the road.

Suffern told McKay that he had received a call from a stranger whose voice sounded quite threatening. The man asked Suffern not to interfere in their work. After the first call, he received another call who also threatened him like the previous one.

Five days after the incident, on October 12, 1975, Suffern got a phone call from a man named Lt. Colin Hunter who claimed to be from the White House. Basically, the call was to collect the information about Three Mile Lake Incident. He even left his phone number. When Suffern called him back, his call was picked up by an officer named Lt. Col. Waters.

Another interesting detail was shared by Suffern during an interview with CUFORN. He disclosed that in a couple of months after the incident, on December 12, three officers visited him and his wife. The men were in uniforms, having credentials from the Canadian Forces in Ottawa, the US Air Force, the Pentagon, and the US Office of Naval Intelligence.

“The officials allegedly showed Suffern a number of gun-camera photographs and other data on UFOs, and implied that the United States and Canadian Governments had known all about UFOs since 1943 supposedly as a result of a US Navy experiment involving radar invisibility – the so-called Philadelphia Experiment. They stated that they had been cooperating with the Aliens ever since that time. They said the incident witnessed by Suffern was “a mistake”, claiming that a malfunction in the craft had brought it down. Furthermore, the officials knew the precise time of the landing, which had not been revealed to anyone at that time.”

There are witnessed who also claimed to have seen the glowing white lights in the sky just days before Suffern Three Mile Lake Incident. Besides, a couple observed a triangle-shaped UFO eight hours after Suffern’s sighting while driving near Port Carling, Ontario, Canada.