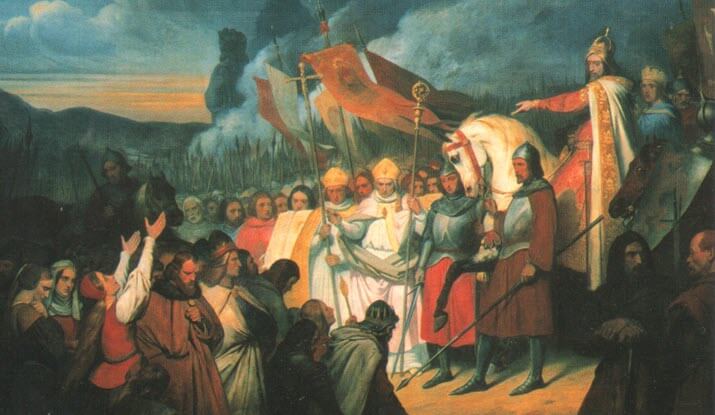 Dr Raymond Drake (1913-1989) read and translated the Latin text of the ANNALES LAURISSENSES and provided us with more evidence demonstrating that the UFO phenomena is not a recent phenomena but something that has accompanied us throughout history and in some cases has influenced the outcome of events.

The incident took place in the year 776 AD at the Saxon hillfort of Sigiburg (modern day Germany). Sigiburg overlooked the river Ruhr near its confluence with the river Lenne. Today on the site of Sigiburg lie the ruins of the later Hohensyburg castle. On the day of the incident the Saxons were attempting to take over Sigiburg from the French. The Saxons retreated not because the French overpowered them but due to something unusual that the people of the time could only explain as an act of God.

“The French , however, with the aid of God opposed them courageously, so that they in no way prevailed. But as to overcoming the garrison within the fortress, they (the Saxons) were unable to destroy them as they had destroyed the others in the other castles, so they began to prepare their forces and their catapults to capture it by valor. But, God willing, the stone-firing ballista which they had set up did more damage to themselves than to those living in the fortress (Sigiburg).

Now when the Saxons perceived it was not going in their favor, they began to erect scaffolding, from which they could boldly storm the castle itself. But God is good as well as just. He overcame their valor. And on the same day they prepared an assault against the Christians that lived within the castle; then the glory of God appeared in a manifestation above the church within the fortress. Those watching outside in that place, of whom many are still living to this very day, said that they beheld the likeness of two large shields, reddish in color , in motion flaming above the church. And when the pagans (Saxons) who were outside saw this sign, they were are once thrown into confusion and terrified with great fear and they began to flee from the castle.

The whole multitude in panic were driven to take to headlong flight; some killed others indiscriminately, glancing back in panic they hurled their spears, which they carried on their shoulders, at those fleeing before them; others were struck by blows among themselves, and by the divine retribution judged down upon them. How the goodness of God for the deliverance of the Christians had worked for them, none could relate, but the more the Saxons became terrified with their increasing fear, so much more were the Christians comforted, and they praised the omnipotence of the Lord, who had graciously extended His power over His servants.”

Source: Translation provided by Dr Raymond Drake and published in “FSR, Vol 34, No:2, 1989