In 1984, there was a crew of six aboard the Salyut-7 space station. They were three cosmonauts of the main expedition: Leonid Kizim, Oleg Atkov and Vladimir Solovyov. It was the 155th day of the main crew flight. The crew was engaged in routine business, preparing for laboratory experiments. 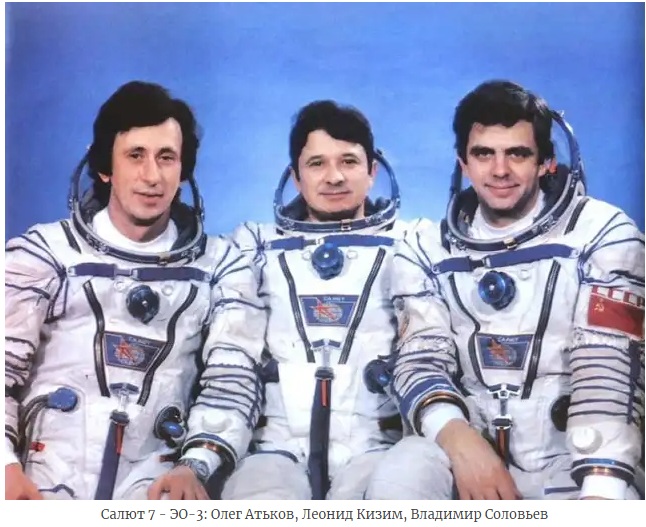 Three-meter-long “angels” in orbit around the Earth.

Suddenly a strange orange cloud enveloped the station and everything inside literally lit up with a bright orange glow. Those present were briefly completely blinded by the bright light. When their vision returned, they saw, on the other side of the porthole, seven unknown beings about 30 meters tall, smiling and flying through space next to the station. They resembled humans, but were gigantic in stature, with large wings on their backs and a glowing halo around their heads. The creatures looked like what is usually described… angels.

In the presence of these creatures, the astronauts felt calm and serene. According to crew members, the humanoids flew at the same speed as the station for 10 minutes.

Two weeks later, three more cosmonauts joined the station crew: Svetlana Savitskaya, Vladimir Dzhanibekov and Igor Volk. Upon arrival on the Salyut-7 spacecraft, they joined the station crew. Then everything around them was lit up again with blinding light. The entire crew decided to look out the windows. Huge beings flew through space again, smiling and giving a sense of peace and tranquility.

After a brief meeting, the crew relayed the incident report back to Earth. One can imagine what was going on in the Control Center at this time… All six astronauts were immediately subjected to various psychological and medical tests, which showed that there were no deviations from the norm. The report was strictly classified. The cosmonauts were strictly ordered to keep silent about what had happened. And they kept silent. Only told each other about the mysterious “visitors” who appear from time to time during flights in space.

The first about these strange phenomena in orbit openly reported in 1995 test cosmonaut Sergei Krichevsky at a lecture at the Novosibirsk International Institute of Space Anthropology. “Information about such visions is transmitted exclusively by cosmonauts to each other, sharing the information with those who will soon have to make the flight,” he said in his sensational report.

“There, in orbit, sometimes you can’t tell which is a dream and which is reality…” – cosmonaut pilot Alexander Serebrov also confessed.

“What is happening? A person suddenly undergoes one or more transformations, suddenly turning into some supernatural animal, literally feeling himself in his skin. The reincarnations can last as long as one wants. Feeling his huge blue claws and scales with every nerve, seeing even webbing between his fingers, the former cosmonaut “wanders” around the unknown planet and “communicates” with its other inhabitants.

Then he becomes something else – say, moves into the body of a creature from another era or another galaxy, at once assimilating a new language, habits and customs. At that moment, he perceives the absolutely unknown to him world as something quite familiar. No space technology is capable of transferring a man in space and time with such rapidity and ease. At the same time, all astronauts who have been in such a state identify some powerful flow of information coming from outside” – test astronaut Sergei Krichevsky.

“The main difficulty of being in outer space was the WHISPER. That’s what we called the phenomenon among ourselves. Scientists have found another, I must admit, more accurate term – presence effect… To understand exactly what is meant, I must tell you about one of my flights, in which I was not alone.

When THIS began, we were over the southern hemisphere. Of course, we both heard about the whispering, but vaguely. Most astronauts at the time hardly shared this impression either among themselves or with medics, fearing that they would eventually be suspended from flying for mental reasons. My comrades and I, naturally, believed that all such rumors were nothing more than a legend born among the first generation of pilots to intimidate the newcomers. My point is that we were not thinking about any whispering. We were absorbed in a completely different matter. The constellation of the Southern Cross, the most beautiful and brightest constellation in the southern hemisphere, appeared in our field of vision. Believe me, it was mesmerizing! We couldn’t think of anything but what we saw through the window. This is where it all started…

At one point I suddenly felt that there was someone else beside us… It’s hard to describe the feeling. It was as if someone unseen was staring at your back with an extremely heavy gaze. The certainty of the invisible presence is one hundred percent! Just a moment later my colleague, the flight engineer, abruptly stepped away from the porthole and began to look around as much as possible. Believe me, we were both people as far from mysticism as possible! That is why we were literally numb when the invisible being revealed himself: there was a whisper… My colleague and I had an extremely trusting relationship, we met many years before the Stellar. This is why we compared “texts” a little later: outwardly they were completely different. But one could not expect anything else, based on their essence! I will try to reconstruct them. Not precisely, of course, but approximately, because it is the sense that counts, not the words. The words, as I understood later, were not important at all, since they were not words in the full sense of the word.

My “text” sounded somewhere in the back of my mind something like this: “…You came here too early and wrong. Believe me, for I am your maternal ancestor. Remember she told you, as a child, about a great-grandfather who founded a factory in the Urals? Son, you shouldn’t be here, come back to earth, don’t break the Laws of the Creator… Son, you must come back, come back, come back…”

I may add that, obviously, for “authenticity” I was also told a small story, known only in our family, related to this great-grandfather…

On completely different “material” was my companion’s text, though the essence of it was the same – an appeal to leave Space and never to return here. His “interlocutor”, or rather “interlocutor”, was a long-dead relative… To make it convincing, a certain situation was used, of which only two people knew at all…

Two days later, we landed. During this time our “texts” were whispered one more time, without the slightest deviation from their content, and the effect of the presence of the “alien” never left us for the rest of the time in orbit.”

These strange phenomena have become a mystery to space psychologists. Some have argued that it’s about a change in the state of consciousness under the influence of cosmic radiation and the ever-changing magnetic field. Others say that we, earthlings, know too little about the cosmos, which is intelligent in itself and thus comes into contact with it. There was even a term: “Solaris Effect”. Others have put forward the version of an alien civilization that had time to take over the cosmos before us and is forcing us back to Earth.

“Our homeland is somewhere other than Earth.”

“I believe that we are certainly not alone in the universe, someone is surrounding us. That’s for sure. We just haven’t lived to the point where it makes sense to interact with us in any way, our mind is not ready for that. I am absolutely certain that the vastness of space is not lifeless. And our planet is really small. Sometimes I have had thoughts that we were put on Earth, that our homeland is somewhere not on Earth. There is such a theory of “Sowing”: as if we were brought and seeded somehow. After all, more than a thousand Earth-like planets have now been discovered. Of course, somewhere there is intelligent life, I am absolutely certain that somewhere there is” – cosmonaut Vladimir Solovyov.

“The moon landing was filmed in a pavilion on Earth.”

“About the American mission to the moon, the only thing I can say is what I heard myself from Neil Armstrong. Neil Armstrong told me the following: “We didn’t bring very conditioned photos and film footage, because there was no time for filming. And television was weak at the time. Then the media took some footage on Earth in a special hangar. And as soon as they “caught it”, they were seized by the hand, that it was made on Earth”. That’s the story”, – cosmonaut Vladimir Solovyov.