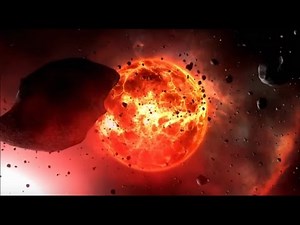 I think that it’s important to note that it is not the gods actually talking amongst each other. The Anunnaki gave the planets character to make their movements about the solar system easier to follow. It’s like a children’s story told by the adults with a greater understanding of the cosmos than they let on here, simplified that a young Sumerian might recite it by heart. This account, after all, explains the origins of every planet, moon, comet and asteroid within our system, and in chronological order. It also offers circumstantial proof of itself. Uranus’s tilt, for example. Pluto’s weirdness. Triton’s retrograde orbit. Saturn’s rings. Jupiter’s storms. The Asteroid Belt. How could a people without telescopes even know of such things– let alone explain them. Apsu = The Sun Little Mummu = Mercury Lahamu = Venus Lahmu= Mars Tiamat = Giant water bearing planet located between Mars and Jupiter. Rhea of Greek Mythology Kingu = Tiamat’s largest moon. One of 11 original moons. Kingu is Cronus/Typhon of Greek Mythology who ate Rhea’s children (Tiamat’s moons) because it was prophesised that one of their children would over throw him. Hammered Bracelet = Asteroid Belt. The remains of Tiamat after numerous collisions, one in particular being very big. In all mythologies it would appear this is the underworld, or the graveyard of the gods. It is why Loki can’t be seen but is still lurking about, throwing darts at poor Mercury. It’s where Persphone (lower half of Tiamat) married Hades (remains of Kingu). Kishar = Jupiter Anshar = Saturn An = Uranus – It appears Uranus played a much bigger role in our solar system in the distant past. Many mythologies seem to credit An as the All-Father, although they could just be referring to his namesake (the first King on Nibiru after their nuclear war cataclysm). An is Osiris and Odin. The descriptions of these gods within their respective mythologies are a perfect match for the planet Uranus. Antu = Neptune. The narration explains that Neptune did not bear any moons herself, (at least before Nibiru showed up) and implies that they were either captured from elsewhere or they were born after Nibiru’s first arrival. From what I gather, the rings of Uranus condensed into hundreds of moons (and maybe even Jupiter, Saturn, Neptune) and that’s why they call him the All-Father, with Antu, his spouse, to care for the children, the moons she cares for currently. Gaga = Pluto = Moon of Saturn pulled from orbit towards Nibiru to become a “planet” whose orbit mimics that of Nibiru. Nibiru = The 12th planet of Z. Sitchin’s work. Renamed many times throughout history. “Marduk”, “Indra”, “Zeus”, “Horus”, “Thor” etc. etc. The tower of babel incident seems to have shattered this story into a hundred fragments. It appears Kings from our own distant past kept renaming the planets in this story after members of their own family, hence all the current confusion between religions Evil Wind = Moon of Saturn captured by Nibiru, later collides with Tiamat. North Wind = Moon of Uranus captured by Nibiru