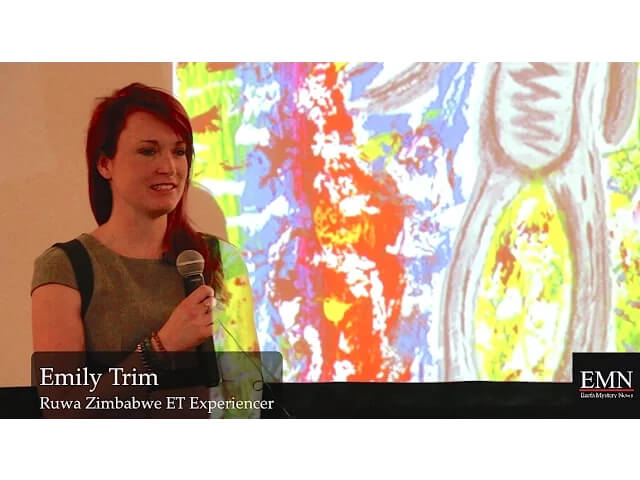 EARTH MYSTERY NEWS – EMN
One of the most outstanding UFO experiences involving a group of children took place on September 16, 1994. Approximately 60 children between 5 and 12 years old were playing outside their school on the outskirts of the capital of Zimbabwe when they saw a large spaceship and several smaller craft gliding over the scrub land. The spacecraft landed beside their playground. The children claim that they were approached by beings from the ships and that the whole encounter lasted about 15 minutes. Emily Trim was one of those children. As a young student at the Ariel primary school near the town of Ruwa in Zimbabwe, the incident was made famous when it was covered by the BBC, who interviewed the children soon after the incident. Harvard psychiatrist Dr. John Mack traveled to the school to interview the children and recorded their extraordinary accounts. To this day, she says, the incident still effects her. Standing only a few feet away from the beings she believes that she was given messages. She has been painting and drawing mysterious and beautiful images she feels are a manifestation of the messages she received. In this video, Emily Trim speaks publicly of the first time at the Alien Cosmic Expo 2015. Her emotional testimony conveys the depth of her personally moving experience as a child who was face to face with an extraterrestrial being. EMN apologizes for the sound issues. Best if used with headphones “I was a witness from the Ruwa, Zimbabwe event. I was just over 8 years old when this happened. I was born in Canada. I’m from a family of five. I have a brother and a sister. My brother was also at the school during the time of the event. My parents are missionaries for the Salvation Army. That’s why we were down in Ruwa Zimbabwe. We were in Zaire before that, then went to Zim, and we all attended Ariel, which was a lovely school. I’m really thankful for that experience, putting aside the UFO phenomenon. It was a beautiful place to live and to be. So, on that day … I can only speak about my perspective and where I was. Every child was in a different area of the playground. But it was recess and broad daylight … and we were just doing our normal thing … playing games. There were boundary lines along the property and one of the games my friend and I used to play was hopping on the boundary lines. Then we heard a high pitch frequency sound, and — out side perspective — we saw a flash and a craft. And it’s really hard to describe time at this point, so I don’t know how long this all happened. All I can tell you is that two beings were hopping along beside Lisa and I. And … they were curious. They weren’t touching the ground [inaudible] … they were almost like mimicking us. All of a sudden they were in front of us. I describe them as being about arm’s reach. And we were frozen. Telepathic images started going across my face … communication through the eyes … that’s all I can really describe it as. It was just image after image after image. One of the other girls standing beside me, she got more communication about the environment, and, for me, mine was more technology uses and [inaudible] uses of technology. [Moderator speaks clearly, no need for transcription.] I’ll just … I’ll never forget that day. Question from the audience: Have you had any other experiences with the same being? Emily: I don’t know if it’s the exact same being, but what I can say … Yes. [Emily describing one of her paintings:] So when we were talking about the time (of the event, which) I depicted here. I don’t know when I’m going to realize what I’m drawing. It just comes out. For me, it’s like an energy that’s all around us that’s causing time to stop at that point. [inaudible, including description of the feeling of being frozen.] Question from the audience: Could you explain what the other beings that have been coming to her, as far as you know, look like. Emily: You mean when I’m having experiences? [Yes.] I’ll just say that they can alter perception so they can change to make you almost feel a bit more comfortable with what you’ve seen. The last encounter there were grays. A face went back and forth between a being and lion. [Moderator speaks.]” *Special thanks to NonDuality Talk for the transcription!.