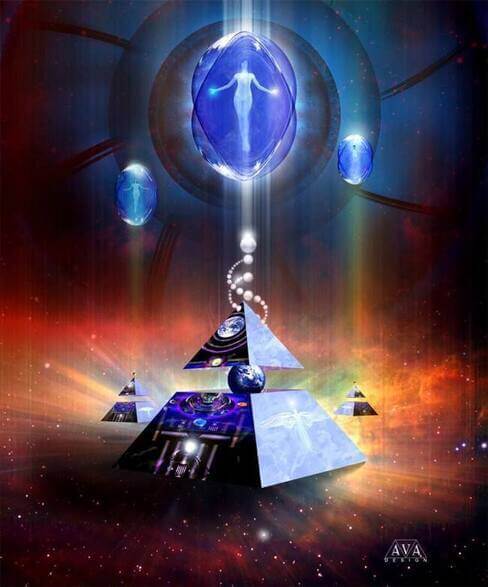 “During incarnations into the Lower Tiers of the Spiral of Creation, such as Planet Earth has been and is now rising out of, before incarnation, the soul’s journey through other lifetimes, and existences and parallel lives and existences will be reviewed and then the soul will choose for itself, with the highest guidance, when and how it wished to gain in soul mastery, and thus which challenges it would face during an incarnation on earth.

For it is indeed under severe pressure that the rarest diamonds are formed. During lifetimes on earth and beyond souls interacted with many other souls, some in intimate situations and some passing and fleeting. Often souls who have a long soul history of incarnating together and working together as cluster groups will choose to incarnate at the same time, and then agree to meet each other along the way, or to merge with them in some way, and thus walk a common soul path and heed a common soul calling.

For some an incarnation onto such a dense planet becomes an act of highest service and an act of love. However, many tend to forget their soul contracts, and thus allow themselves to be veered off the path, and then find a lifetime in which they added more soul lessons to be mastered, than actually master them.

On planet earth, (where free will and choice is still applicable) lifetimes here often added to the initiations of the soul, mainly because soul lessons were not mastered, and thus added negative patterns were created between individual souls and within groups of souls. Thus often groups of souls will need to work through collective initiations and collective soul mastery.

Thus the soul contracts drawn up before incarnation, will stipulate the areas of soul mastery and the souls who agreed to assist with the mastery lessons (often taking on the role of challenger), and/or the collective Soul Group lessons in highest mastery. Sometimes this can extend to whole nations who incurred immense karmic lessons and thus need to master these, collectively. In such cases the souls will be drawn together, in order to finally master the collective lessons.

All souls on earth will on a regular basis, have wake up calls, and those who waken will and are willing to master their soul lessons, will then go through the initiations as and when they are ready for such. These will most often come of the form of challenges to overcome, lessons in faith, and most often lessons in applying the innate soul wisdom in order to gain soul mastery. On planet earth, this mostly means and meant, finally overcome fear, dissolving old false programming and negative patterns created with other souls. The more intimate the relationship, the more the challenges will come as agreed to before the incarnation. Most often this will relate to old dramas created in other lifetimes and existences, until both souls finally master the lesson and most importantly find and experience the Power of Unconditional love, for self and others.

For there is no greater love, than the love which embraces another soul, without judgment, without boundaries, without criticism, without trying to change anything about them – but simply loves, as is. The greatest of all initiations is indeed the initiation into the Power of Love, in the highest degrees.

For it is easy to pay lip service to love – it is quite another to love another when severely challenged and indeed tested to the highest core.”