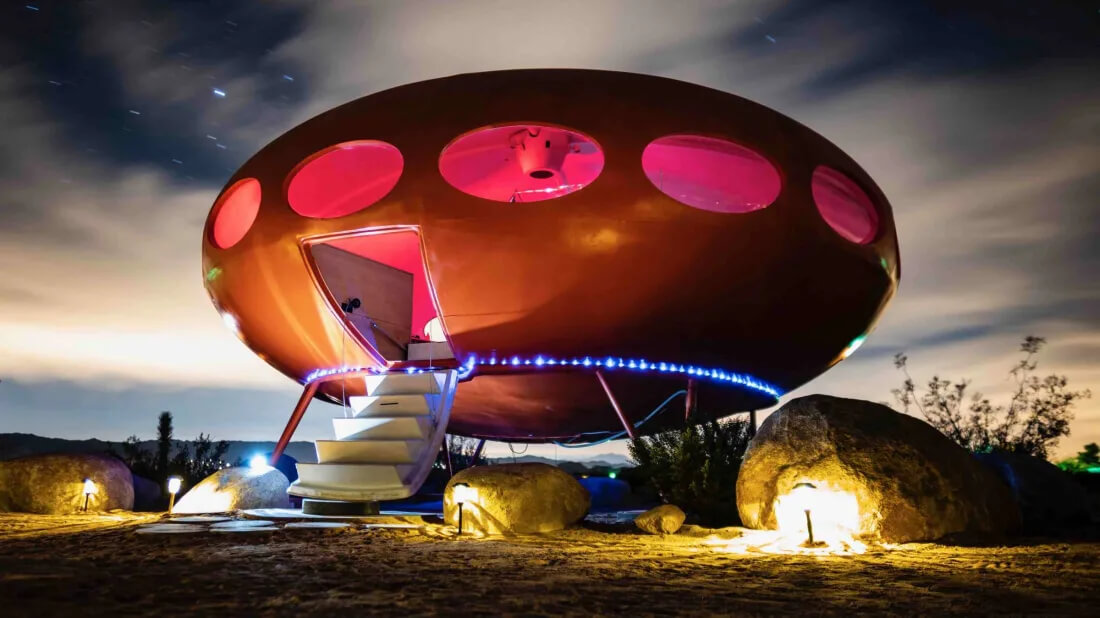 Unless you know something we don’t, your chances of coming across an actual alien spacecraft in the middle of the desert are pretty slim. But thanks to Airbnb, you can at least pretend to.

The Area 55 Futuro house is a 520-square-foot red ellipsoid located in the middle of California’s Joshua Tree National Park. Though it’s not the only one of its kind, it’s the only one in the U.S. that you can rent for a few nights’ stay. According to Thrillist, Futuro houses were conceived and constructed by a Finnish architect named Matti Suuronen in 1968, when the world was captivated by the space race and futuristic architecture was all the rage. Suuronen originally intended his innovation to function as a skiers’ hut that could easily sit on a mountain and avoid snow pileup on its round roof. While one Futuro house in Dombay, Russia, is occupied by visiting skiers to this day, the other 80 or so are scattered in random locations and used for random purposes (or no purpose at all).

Before Area 55 became a rentable desert cottage, it belonged to Hugh Hefner, who installed it at the original Playboy Club Hotel in Lake Geneva, Wisconsin, back in 1968. The pod passed through several other owners and eventually landed in the hands of music producer Ronald Jackson, who converted it into a glamper’s dream home and opened it for business in October 2019. Right now, Area 55 is listed on Airbnb for $218 a night, but there aren’t any available dates until spring 2022.

The UFO theme no doubt factors into its popularity. There are even old VHS copies of sci-fi classics like Alien (1979) and the original Star Wars trilogy inside, as well as some retro-futuristic chairs and other decorations. But it also boasts amenities that would appeal to any kind of camper—a beautiful outdoor kitchen with a propane grill, lots of natural light, an envious collection of board games, air conditioning, and Wi-Fi.

If Area 55 sounds like your ideal vacation spot, you can check out the full listing here.