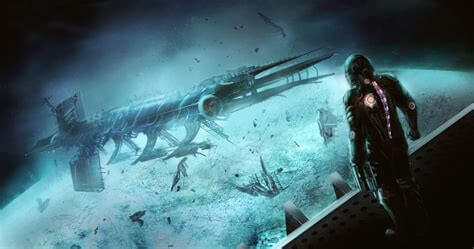 Russians never landed on Moon but they were first to touch outer space. As for the first man and woman in space and the first satellite, the Russians explored space before the Americans. During the Soviet rule, Russian developed several advanced machines which made them a powerful nation. However, the country kept the secrets of UFOs for a long time. There are many popular UFO encounters that occurred in Russia, but the bizarre claim of a wrecked alien ship in the Earth’s orbit by Soviet astrophysicist Professor Sergei Boshich is still a big mystery.

In 1979, Soviet astrophysicist Sergei Bosich made a claim that shocked the scientists from the US & UK. According to him, he discovered an alien spaceship, scattered in pieces and orbiting the Earth.

Although it was almost impossible to get the information about Soviet internal matters, this story somehow reached the front page of the American weekly “National Enquirer.” Later, it was reprinted by the popular British tabloid “Reveille” under the title “Sensation In Space.”

A popular soviet sci-fiction writer Alexander P. Kazantsev, who was also known as a pioneer of Soviet UFOlogy, estimated that the spacecraft was at least 200 feet long and 100 feet wide. He said: “It had small domes housing telescopes, saucer antennae for communication, and portholes.”

Interestingly, the story was supported by other Soviet scientists such as geologist Alexei Zolotov and physicist Vladimir Azhazaha from Moscow. Bosich and Azhazaha agreed that the spacecraft had been exploded into 10 pieces two years before Sputnik 1 launch on December 10, 1955. Each piece was about 100 feet long.

Kazantsev and Zolotov added that there could have been the bodies of the crew of the spacecraft in the scattered pieces, whose height could possibly reach up to nine feet. Both experts advocated the theory that the 1908 Siberian explosion (popularly known as the Tunguska event) was caused by the crash landing of nuclear-powered alien spacecraft.

Obviously, the western space experts ruled the Russian scientist’s theory of scattered alien spacecraft. If it was the case then their radar would definitely acknowledge such a big object orbiting the Earth.

British expert of the Royal Aircraft Establishment (former British Aerospace company) said: “If there were objects the size and distance suggested by the Russians they would be tracked both by radar and visually. We have seen no such objects.”

While Vladimir Azhazha said: “Meteors do not have orbits. They plummet aimlessly, hurtling erratically through space. And they do not explode spontaneously. All the evidence we have gathered over the past decade points to one thing — a crippled alien craft. It must hold secrets we have not even dreamed of. A rescue mission should be launched. The vessel, or what is left of it, should be reassembled here on Earth. The benefits to mankind could be stupendous.”

Some experts tried to link the Russian story with an article published in the journal Icarus in 1969, by the US scientist John Bagby. He claimed to have found at least 10 moonlets that were formed on December 18, 1955, after a parent body broke. His evidence was criticized by Belgian astronomer Jean Meeus, who called his story “groundless.”

Although the mystery was never solved, some people considered that it was the Black Knight Satellite. At the same time, others suggest that the Russian government was expecting to launch a joint mission with other countries, in particular, the United States to retrieve the spacecraft debris. Whatever could be the reason behind this case, it became a sensation and was also forgotten without any satisfactory remark.