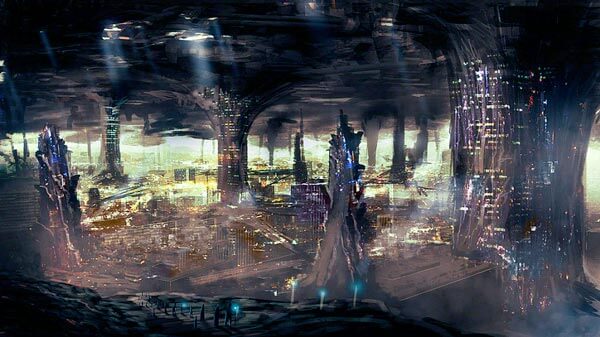 The Elite of the Elite Reptilians that run our Planet are blue eyed,
white skinned, 7-8 feet tall, winged Reptilian Humanoids. They live in
underground ´nests´ all over the globe. [There are also many varieties
of negative aliens underground. And, unfortunately, above ground.

“The Inner Earth became the ´homeland´ for most of the surviving
Reptilians of Lemuria. Here, they created a vast underground
civilization. This started the legends of hell and demons living in
fire under the earth. And the legends of Vampires and shapeshifting
werewolves that plague our nazified culture and media of today. They
built tubes containing fast, subway like vehicles that can travel to
any point on the Earth within a few hours. They created the famed
underworld cities Akkadia, Agartha, Hyperbolea, and Shamballa, that
are sought by explorers to this very day. These cities are built along
the inside wall of there inner crust that lines the interior of the Earth.

“Remember, the hollow Earth is not a theory but a scientific fact
caused by the cooling and spinning of a planet as it is ejected from a
star or sun.

Stewart also tells me there´s a reptilian nest under Banff, Alberta in the Canadian Rocky mountains.

“Ankhor Kell Cambodia I have heard that we sent soldiers there to investigate rumors of an ancient city during the Vietnam war and lost contact. the first unit was a normal unit. other units were sent after the war they were omega and special forces and they too were lost. the last group we sent was in 1986 and they disappeared also. the first few times i can understand soldiers being captured. but after so many times, that story gets kinda old… what was going on there that was so mysterious or secret. this wasn’t just to find POW’s was it? was this more than an ancient city mystery?

Stewart´s Reply: You are correct. This area is a known reptilian nest, only a very aggressive one that is waiting for the return of the original Draco’s which has now occurred. All those who were sent were captured, and probably eaten!

I’ve read about a huge underground base built and in operation by the shadow government, under Denver’s airport. Unless it (and any of the other 100 plus underground US bases already operating, is being used to house large numbers of aliens) why was it built and what activities take place there?

Stewart´s Reply: Yes, this base contains enough concrete to build a six lane highway from Denver to Chicago. It was built as preparation for Denver being the Western District Capitol of the US. It is currently used as a staging area to other Western bases. It connects to the inner Earth and Reptilian nests. In the near future, it will house US citizens who dissent from the NWO.

Stewart´s Reply: That is the Marfa area of West Texas. This area sits on top of a Reptilian nest.

It seems like there would have to be a number of openings into the inner earth needing blocking for the troops to still be bombing caves after “victory” and the announcement that Osama is now probably in Pakistan. Just today on the national news there was a story that a 40 acre underground Al Quaida compound was destroyed. Didn’t they really mean a 40 acre opening leading to a huge reptilian nest? What is the likelihood that the strategies for “winning” this war against terrorism includes killing of as many Reptilian “terrorist” outposts by the ruling Hybrids as it includes the destruction of out-gunned Arab “militia” peasants? Where are the questions by the press wanting answers as to why there is an obsession with bombing caves when the war is now “over” in Afghanistan?

Stewart´s Reply: All is for show. Osama is long gone from the area and is probably in Africa. Iraq should be next.

For several years I’ve been drawn to visit Montana and Wyoming because of the natural beauty of the area, but now I am wondering if there is a Reptilian nest in the area. I know Elizabeth Claire Prophet’s ranch is in that area and that she was probably controlled by the NWO. –Daniel

Stewart´s Reply: If you knew what was going on underneath Montana and Wyoming, you would not be so enamored of it. You can visit but don’t stay for long. Yes, there are many Reptilian underground areas there

This is a follow-up question to your answer regarding Montana/Wyoming. What areas of the US are the least appealing to Reptilian nesting? I think it’s important to know where are the areas of least likely for encounters.

Stewart´s Reply: Areas of least reptilian activity are the upper Midwest, coastal middle Atlantic, and most of Alaska. They don’t like flat or cold areas.

In an archived question/answer posted on 01/19/02, Stewart had replied to an inquiry about the best places to live in the US. His response was “no place is any better or worse. In the US, stay away from larger cities if you can”. Why is that? For the past year, I´ve been residing in Tucson, Arizona which is basically out in the middle of nowhere (coming from San Francisco Bay Area, it´s a drastic change). Stewart´s answer somewhat surprised me, since I would think it would be somewhat easier to control the masses in a medium sized metro area than the Bay Area? I could be mistaken.

Also, I have noticed here in Tucson a lot of reptilian imagery. For example, one of the Mc Donald´s restaurants in my neighborhood has a big, hungry-looking dinosaur replica (at least 10 feet tall) on its grounds. As well as a painting mural on the side of a floral shop depicting a “happy” reptile, dressed in a business suit picking up daisies. I never saw anything like that in Silicon Valley.
P.S. Keep up the great work. The two of you are courageous warriors.

Stewart´s Reply: The larger cities will have a dominant military presence and stricter enforcement’s for the population. Therefore, it will be more difficult to live in them. Tucson is close to underground reptilian “nests” so you would see more reference to reptiles there in order to desensitize the locals to anything they might see. Glad you like the site.

Thanks for the great work you and Janet do. Can you tell me what´s going on in the Central Valley of California, (Fresno, Modesto, Madera). In the last few years we have had several high profile murders where ´rituals´ were involved. I am a Fresno resident and our community is shocked by the latest ´ritualistic murder´ to hit our area. There have been rumors around town for the last 20 years that a large coven of Witches used to live on the San Joaquin River and practiced their ´craft´ by sacrificing infants and animals to their deity of choice. As our town grew out towards the river and residential development forced the coven to leave, many believe that the some of the ´witches´ migrated north (Modesto / Merced) along the river, while other´s made their way into town. There is a lake called Lost Lake that is about 10 miles north of the city and sits at the bottom of the Friant Dam; many people think that Lost Lake is a cursed lake as many people ha!ve drown there, as well as bodies being discovered in the lake. Lost Lake feeds directly into the Fresno portion of the San Joaquin river. And many of the rumored ritual sacrifices occurred at or near Lost Lake. Any info?

Stewart´s Reply: Your area sits over a large reptilian nest that reaches up to Mt. Shasta and down to the Mojave. There are many ritual locations in this vast stretch. Modesto and Fresno have been test cities in California for mind-control experiments since the mid 70s sponsored by Berkeley and The Presidio in San Francisco. In the last 3 years, there have been major activation’s and lots of sacrificial rituals.

what is the area known as the zone of silence in Mexico about? atmospheric disturbances sapping radio waves, strange sightings etc? what is in this area we dont know about?

Stewart´s Reply: This area is above a gigantic underground reptilian nest that has been there for thousands of years. It has now been activated since the Hale-Bopp Comet deposited its craft behind the dark side of the moon.

I heard a news story yesterday that there is a planned proposal to re-name the Burbank Airport to The Bob Hope Airport. I remember in a past seminar that you said there was a large reptilian nest underneath this airport. Does this new name change have anything to do with this? There is already a John Wayne Airport in Southern California. Will all the regional airports get named after entertainers? Just wondering… Marie North Hollywood, CA

Stewart´s Reply: Most major airports are named for famous programming icons or major handlers/ controllers. It helps to reinforce the programming as well as be used as ritual sites. I guess there will never be a Stewart Swerdlow International!

I hope that you and Janet are both well.
My wife who is from Thailand has been following the Thailand Fireball mystery story. I was able to find the English translation below. I know that you are familiar with that part of the world an may find it interesting, let me know if you know anything about it as my wife would be very interested.
Fireballs are no mystery after all
Posted on Sunday, 12 October 2003, 11: 10 GMT
Recently fireballs have been seen at night near the Mekong River. The mystery behind the appearance of these “Naga fireballs” on the Mekong River has been finally solved, and it is a natural occurrence, the Science Ministry said yesterday. The phenomenon is caused by flammable phosphine gas, the ministry said. The ministry launched a scientific expedition on Friday to measure and observe the annual manifestation in Nong Khai province. A thermo-scanner was set up near the riverbank and specialists were stationed at various points along the river, including at the Temple where thousands of curious spectators had seen the event.
The Naga fireballs appear annually at the end of Buddhist Lent, leading many to believe it is not the result of natural causes but something more mystical. But the equipment picked up the movement of the gas, floating off the water surface, before people could catch with their eyes the glowing orange bubbles igniting into fireballs. Fireballs have been sighted at various times throughout the year in the Mekong and nearby areas with a high concentration of phosphine, he said. (Source: The Nation)

Stewart´s Reply: These occur in many parts of the world. However, most of these areas are over reptilian nests. If the scientific explanation were true, people would have been burned by these fireballs over the centuries. These are created by the entry into the physical plane from the astral plane of energies that are non-human.