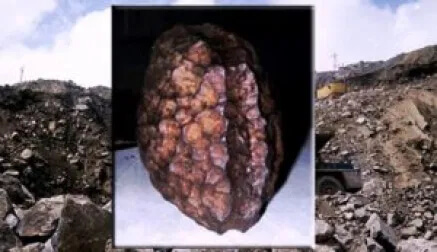 The alleged 60 million years old artifact was discovered by a workman named Reidl back In the year 1885.
The worker who discovered the mysterious artifact used to work at a foundry in Schöndorf / Vöcklabruck (Austria), launched by Isidor Braun (1801-1866).
The worker broke open a block of brown coal that had been mined at Wolfsegg and a strange metal cube/cuboid like object was discovered embedded in the block and thus it was termed as the Wolfsegg Iron.

A number of things regarding this discovery are unusual thus giving it a mysterious outlook.
The very first thing is the origin of the object itself, which has not been indentified even till now.

As per the research conducted by the experts, they have concluded that it is an artifact that unarguably proves the existence of ancient civilizations in prehistoric times whose technological developments exceeded the modern human race.

However, the mysterious artifact has been embedded in a tertiary coal deposit in which is dated to about 60 million years old.

It is believed that the object seemed unusual and significant to the workman Reidl and his workmates and they took it to their boss.

The son of the founder of the foundry, Isidor Braun, took the artifact to the Heimathaus (Museum) in Vöcklabruck

It was suggested In 1886, by the mining engineer, Adolf Gurlt who was a Professor of Geology at the University of Bonn that the artifact was meteoritic in origin.

A cast is kept in the Oberosterreichisches Landesmuseum in Linz, where the original object was put up for public display from 1950 to 1958.
During1966-67, the alleged 60 million years old artifact was analyzed at the Vienna Naturhistorisches Museum.
The analysis was done using electron-beam microanalysis, and during the analysis, there were no traces of nickel, chromium, or cobalt found in the iron, indicating that the object is not of meteoric origin, while the lack of sulfur shows that it is not pyrite.

A further investigation by Hubert Mattlianer, in 1973, reached a conclusion and stated that it had been cast using the cire perdue (lost wax) technique.
Dr. Gero Kurat (born 1938) of the Museum and Dr. Rudolf Grill (1910-1987) of the Geologische Bundesanstalt of Vienna also thought it might be cast iron because of the low magnesium content of the object,

Another description of the mysterious 60 milions year old artifact:

“The object was almost a cube, with two of its opposing faces slightly rounded. It measured 67 mm by 47 mm, being this last measure taken between the two rounded off faces. It weighed 785 grams. A very deep incision surrounded it. Its composition age of hard steel with nickel and carbon. It did not contain sulfur, and thus he was not pyrite.”

Some experts assert that the edges of the object were sharp and straight, and there was little doubt that this was a machine made instrument that seemed part of a much larger instrument.
They claimed that the object was made of iron, carbon, and a trace of nickel.
The cube was said to have a specific gravity of 7.75.
The object measured 2 1/2″ by 1 4/5″, weighed 28 oz., and had an incision that ran around it horizontally.

It has also been claimed by ufologists that the object has not emerged from space and is evidence of the existence of advanced civilization on Earth millions of years ago.
They assert that the civilization had the access to advanced technology and also believe that many other mysterious objects discovered all over the world, indicate a pattern.

Interestingly, it is also claimed in the paranormal literature that the Wolfsegg Iron disappeared without a trace in 1910 from the Salzburg Museum.
However, as mentioned above, it is at the Heimathaus Museum in Vöcklabruck, Austria, which is where the below-given photograph was captured.

Well, the exact origin of this mysterious artifact has been a subject of debate even till now.
What are your views regarding this?