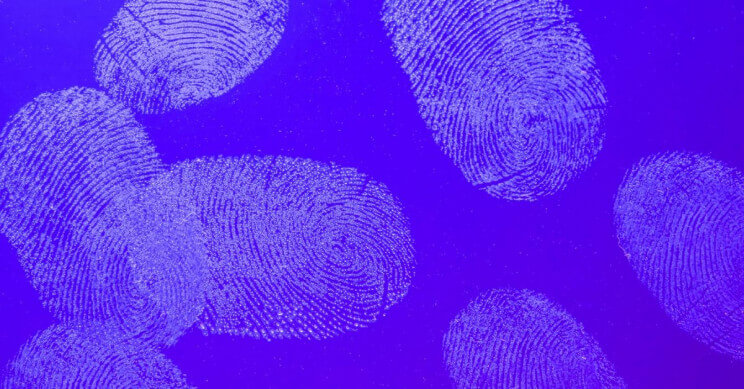 Take a look at the tip of your right index finger, and now over to your left one. Do you notice the little lines going around in circles, or waves? These may appear invisible, but they’re there. These are your fingerprints, and they are entirely unique to you.

Although the scientific study of fingerprints, called dactyloscopy, has been around for over two centuries, the knowledge that our fingerprints are completely unique to each individual has been known for around 2,000 years.

Nowadays, fingerprints allow forensics teams to identify criminals, they enable you to unlock your smartphone, enter your office, or can be used on your personal I.D.s, among many other uses.

So, the question arises: how do fingerprints work?

Astonishingly, your unique set of fingerprints is exactly that: unique. Not one single other human on Earth has the same set of lines on the tip of their fingers. Not even identical twins have the same fingerprints.

What’s even more exciting is that your fingerprints are immutable, meaning they remain unchanged over the duration of your life. From the moment you’re born to the moment you die, your fingerprints remain exactly the same. So, even if you suffer an accident that skins your hands and fingers, the skin will grow back with the exact same fingerprint formation.

There is only one exception to this rule and that’s for people with adermatoglyphia, meaning when someone is born without any fingerprints whatsoever. (It’s easy to imagine all the issues that arise from not owning a set of fingerprints in this technological day and age.)

Interestingly, your fingerprints are developed based on physical factors, such as where the fetus is placed in the uterus as you’re being formed, and the density of the amniotic fluid, among other factors.

Speaking of the formation of fingerprints, a fun fact to know is that these are created approximately during the tenth week of pregnancy when the fetus is only about 7.62 cm. By the sixth month of pregnancy, fingerprints are fully formed.

In keeping with the early formation days of fingerprints, these are formed at the same time as the neocortex in the brain. This part of the brain controls emotions and cognitive capabilities such as concentration, memorization, and how you manage stress and problems, among others. To further prove this point, in the rare instance when someone is born without a brain, they don’t have fingerprints either.

What your fingerprint pattern says about you

There are different patterns that form your fingerprint. Interestingly, certain formations show the presence of a particular medical condition. For instance, if one group of people share the same disease or medical condition, they have common patterns.

This doesn’t mean they have the same fingerprint, merely similar patterns arise within their fingerprints.

This fact has been proven by observing people who have certain congenital diseases such as Down’s Syndrome, schizophrenia, or certain types of heart disease. More common ailments, such as people who are prone to suffering teeth cavities, also have a direct link to people’s fingerprints.

Someone’s sporting talent may also be discovered through their fingerprints.

Even before you’re born there may be a way of knowing whether or not you’ll have a natural talent for sports or at the very least a genetic predisposition that will facilitate the development of your sporting activities.

As mentioned above, your fingerprints are formed while you’re in the womb, and are defined by each person’s genetic information. So according to genetic traits that show up on your fingertips, tests could be carried out during pregnancy to find out whether or not the baby will grow up to be an athlete or someone who has the potential to be one.

It’s not entirely clear why knowing whether a person will be born a natural athlete is such important information that you should have it checked out prior to their birth, but it’s still a fun fact.

Something you have in common with koalas

What’s interesting with regards to koalas is that they share the closest style of fingerprints as us, even more closely aligned than our evolutionary cousins the primates.

Researchers have demonstrated that it’s possible to pick up contact with drugs or explosives merely from fingerprint marks. The sweat glands found on your fingertips secrete traces of substances that you’ve ingested, for instance, drugs. It’s, in fact, possible to detect cocaine, heroin, and morphine from one single fingerprint.

Worryingly, these drugs are prevalent on the majority of the population’s fingerprints. In one study, 13% of non-drug users showed signs of cocaine in their fingerprints — something relatively easily picked up from banknotes or other contaminated surfaces.

However, an actual drug user will secrete 100 times more in their fingerprints. Even after they’ve washed their hands, the substance can still continually excrete through the fingertips. So in the end, it’s easy to tell the difference between drug users and non-users.

Not to worry, though, even if non-drug users show signs of drugs on their fingertips they’re in no real danger as these tests are extremely accurate and pick up amounts that are as small as tens of picograms (that’s 0.00000000001g) of the drug.

The biology behind fingerprints is captivating and sheds a lot of light on individuals and their lifestyles. 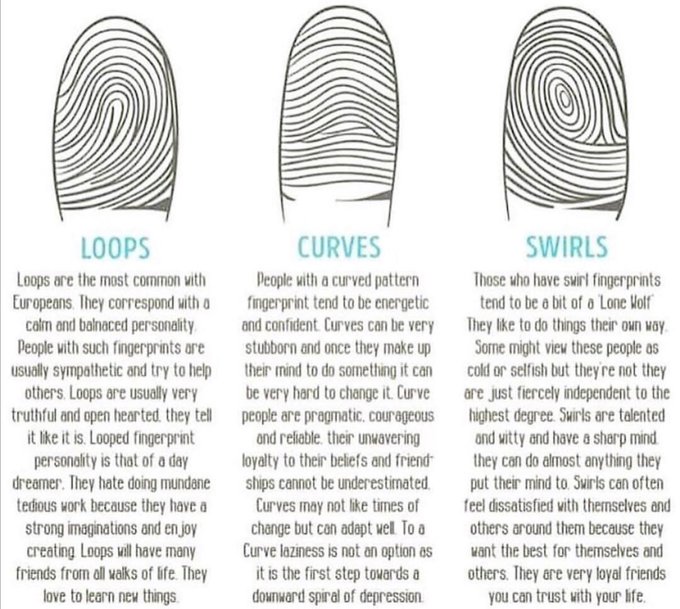 1 thought on “What your unique set of fingerprints says about you.”