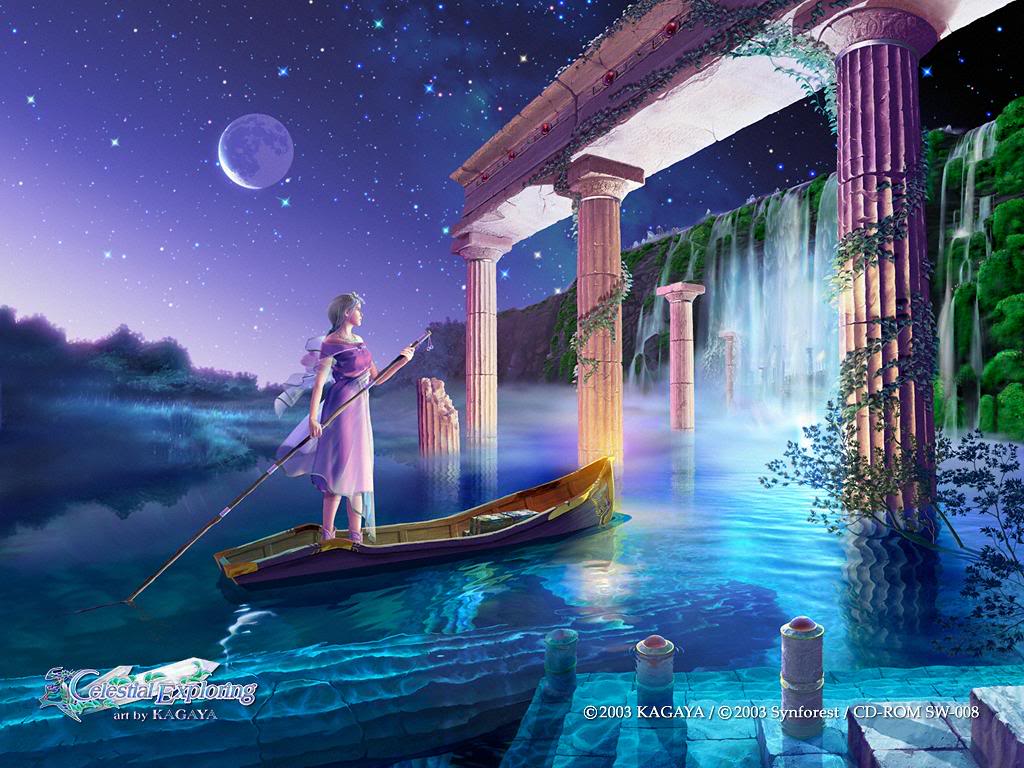 The Dream Realm (also known as the Dream Dimension, dreamscape, or the Realm of Chaos) is an extra-material realm known for being intensely unpredictable and chaotic. Where the Light Realm is the source of light and the Shadow Realm is a shadow of the Material Realm, the Dream Realm has been called a mirror of the Material Realm. But if it is a mirror, it’s a crazy funhouse mirror, which distorts and weirds everything it reflects.

IC scholars believe the realm itself is exists in part or in whole as a result of the dreams of some or all living creatures, primarily those of the Material Realm, but also of the inhabitants of other Realms0 as well. The result is a realm where literally anything and everything is possible, and where almost nothing ever remains the same from one visit to the next.

Scholars in the Vaxian world believe the realm itself is exists in part or in whole as a result of the dreams of some or all living creatures, primarily those of the Material Realm, but also of the inhabitants of other realms as well. The result is a realm where literally anything and everything is possible, and where almost nothing ever remains the same from one visit to the next.

As a result, “navigation” in any typical sense has practically no meaning in the dreamscape, because navigation implies basing your location and direction on fixed elements of your environment, while the dreamscape has none. Any and all normal attempts to navigate the Dream Realm will undoubtedly only flummox the traveler; indeed, a visit to the Dream Realm is unlikely to involve an actual attempt to get “somewhere,” because in the Dream Realm there is no such thing.

Thought is an intensely powerful locomotor in the Dream Realm, more so than in any of the other realms; merely thinking of Kanestronia can transport you there, even if no living creature happens to be dreaming Kanestronia into the dreamscape at that moment. In that case, your own thought would be adding Kanestronia to the dreamscape and taking you there–though it would be based on your memories and your impressions of Kanestronia, not necessarily an accurate representation of the tower itself, and it would likely disappear as soon as you stop concentrating on its existence. If other people are dreaming about Kanestronia, the tower you visit might very well be in a constant state of flux, shifting between any or all of the conflicting visions of the tower. Oneiromancy is generally a more “reliable” method of moving through this realm, though even with oneiromancy one will still experience the Dream Realm as constantly changing.

Because of the way the dreamscape is molded and shaped, it is just as likely to find locations so fantastic that they do not and could not exist in any other realm. These fantastical dream environments may be found side-by-side with real places, or real places may take on properties that are completely incongruous with reality. They are truly limited only by the subconscious imaginations of the world’s collective dreamers.

Creatures from any of the other realms may be found here, whether they are real and actually physically inhabit the dreamscape (a very dangerous prospect) or simply born from the dreams of the world’s dreamers. Fire Elementals may live side-by-side with humans in Ramsalon, hordes of Undead may rampage across the deserts of Candenord, or creatures unlike anything ever seen in any other realm may be given birth until the dreamers finally awaken.

Some of these creatures (or people!) may spontaneously obtain permanency, continuing to exist even after the dreamer has awakened. The mutable nature of the Dream Realm confuses these creatures, who become unpredictable and often violent as a result. Collectively, these permanent dreams are known as “nightmares,” frequently tormenting dream-selves all across the dreamscape. (A “nightmare” can also refer to any sudden shift in the dreamscape that frightens and/or causes harm to the dream-self, such as suddenly falling into a giant chasm.)

One of the dreamscape’s most notable inhabitants is a figure who refers to himself as the Dream Daemon, a tall, pale, winged creature with a personality as bemusing and unpredictable as the realm itself. His origins are completely unknown, but the Dream Daemon does possess unrivaled control over the Dream Realm to an almost omnipotent degree. He takes a surprising amount of interest in mortal creatures, whom he perceives as lesser beings worthy only of his curiosity, and occasionally takes interest in studying or interfering with their affairs.
The Dream Daemon takes an active hand in the affairs of the dreamscape, acting as its steward and guardian against those who would seek to manipulate it for their own ends. He possesses an intense distaste for oneiromancers bordering on vicious hatred, despite the fact that he has incredible skill in that very same sphere of magic; it is entirely possible that, for whatever reason, he believes only he has the right to alter the dreamscape.

The Dream Daemon is assisted in his work by several creatures he calls “dream sprites.” He treats these lesser demons as his children and is extremely protective of them, as they are of him; their origins are just as uncertain as his own. They are competent oneiromancers, but to a significantly lesser degree than the Daemon himself.

Additionally, pure chaos elementals] are known to roam the Realm. It is not known whether they are truly native to the Dream Realm or if they’re simply inter-Realm Travellers who find the amorphous nature of the Dream Realm ideal for their tastes. If they are natives, then they (like the Dream Daemon) are an exception to the rule that things from the Dream Realm usually can’t leave and, if they do, don’t retain their powers in other Realms. Chaos elementals have been known to occasionally travel to and cause havoc in every Realm.

Traveling to the Dream Realm

Oneiromancy can be used to force a person’s dream-self into the dreamscape even when the person is not sleeping. This is like a form of astral projection, and the consequences can be extremely unpredictable. In some cases it may act simply like dreaming, with the person’s physical body falling asleep; any negative consequences to the dream-self would result in awakening the dreamer. If instead the magic is used to forcibly keep the dream-self in the dream, negative consequences could be more permanent, severing the mental dream-self from the physical body and thereby damaging the mind of the dreamer or rendering him comatose.

Some forms of oneiromancy (or transportation magic) can also be used to travel physically to the Dream Realm. This is an incredibly dangerous place for one’s physical body to reside; because the realm is always changing and aggressive nightmares (or temporary dream creatures) may be encountered at any time, danger is constant, and death or dismemberment in this state is permanent since it is happening to your actual physical body. Many unwary mortals who wander into the Dream Realm physically are never seen or heard from again.

The only magic that can be truly relied upon in the Dream Realm is oneiromancy, which is significantly easier to cast here. In fact, a competent level of oneiromancy is practically a requirement for safe travel within the Dream Realm. Not only does it allow safer and more predictable navigation, it is also a powerful form of protection against the extreme dangers that the chaotic dream realm presents. Like the dreamscape itself, oneiromancy in this realm is limited only by the imagination of the user: it can take on any form and manipulate any aspect of the dreamscape in any way if the user is powerful enough. Temporary aspects of the dreamscape can be made permanent, and permanent aspects can be banished; the dreamscape itself can even be altered, essentially creating realities as the caster desires. In the dreamscape alone, oneiromancy could theoretically be used to destroy enemies, heal wounds, or travel, completely unlike its applications in the material realm, which are considerably more limited.

Chaos magic is as close to a natural phenomenon in the Dream Realm as anything can be, roughly on par with oneiromancy. It is extremely easy to cast here, though its effects are no more or less predictable than they would be anywhere else, as there are no “degrees” of unpredictability to chaos magic. The effects of chaos spells do, however, have a much greater tendency to become permanent in the dreamscape, whereas in the material realm they usually fade when the spell wears off.

It is theoretically possible to intentionally travel into a specific person’s dream while in the Dream Realm. To do this requires oneiromancy, a strong connection with or understanding of the target, or both. It is much easier to accomplish by using oneiromancy on a sleeping dreamer outside the Dream Realm, rather than trying to find it from within the chaos of the Dream Realm.

Similarly, it is possible, though rare, for characters to lose access to skills or have temporarily altered Stats while dreaming. This fact should be used sparingly, if at all, and World should be consulted before running a session where this occurs.

Dreams have always been very interesting to me  , so real at times gets a bit confusing and I know I am trying to spiritually evolve and learn things . So much is stored up in our brains and we need to reach these realms of knowledge and self awareness.  Relax and try ! Happy Quarantine !