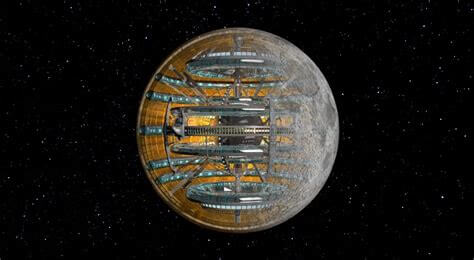 Even before the first flight, there were thoughts about the origin of the Moon. It was assumed that the thickness of the dust should have been more than 10 meters. The lunar module could drown in the dust.

Besides, the developers understood that the Moon is an artificial object. Based on the calculations, the Earth could not attract such a huge satellite. In addition, the moon has an almost circular orbit around the earth, which clearly indicates its artificial origin. By all accounts, if the Earth attracted the Moon, then the Moon would rotate in the opposite direction around the Earth. In favor of the version about the artificial origin of the moon, its craters also speak. Looking at the Moon from the Earth, it is always turned to us with its one side. Craters are made at right angles to the Earth. This is impossible since the Earth covers the moon with a direct hit of meteorites. Moreover, gravity does not allow a meteorite to get along the moon at the right angle.

The first mission to the moon was prepared and sent. Astronauts did not yet know what exactly they might encounter on the moon. What are the laws of physics there? There could be other possible oddities that would await them there.

These oddities began from the very moment of the landing. During the lunar landing, the module hit the surface of the moon, and there was a ringing sound that had been continuing for 3 hours. Astronauts began to study the surface of the moon. They photographed stones, conducted small experiments and measurements of the environment.

The astronauts went to the nearest crater where they found something weird. The bottom of the crater was flat. The same oddity was found in another crater.

One of the astronauts decided to throw off a huge stone boulder, which was located on the edge of the crater. There was a deafening metallic ringing accompanied by a small moon quake. The astronauts began to further study the surface, carried out various measurements, experiments. The ringing died out, and after 3 hours it completely stopped.

The mission was watched by a very powerful telescope from Earth. The astronauts felt another moon quake and a metallic ringing. The ringing was short, only a few minutes, and quickly stopped. The astronauts received an order to finish the mission and evacuate immediately.

Upon arrival to Earth, the headquarters secretly informed the astronauts that they had been watched by an LLO (a lunar flying object), but this was not the worst fact. It turned out that the dumped stone in the crater moved to the opposite side of the crater. Looking at the photo, the astronauts were in shock.

The next secret mission to the moon was organized and sent. Based on the experience of the first mission, special tools for metalworking were provided to the astronauts.

The landing site was the far side of the moon. This was done secretly so that observers from the Earth would not know about it. The module was launched right into the crater.

The astronauts, without leaving the module, began to drill the bottom. The sound resembled a huge bell that was being drilled. The drill scraped the metal, but there was no drilling effect. They managed to drill only 10 cm. The astronauts took the samples of drilling for a study to choose the correct composition of the drill in the future.

The astronauts had already prepared to fly away, as a small moon quake and ringing began. The crater’s gateway opened a little, the apparatus with astronauts fell into the depths of the moon. Their communication with the Earth was cut off. After a short time, astronauts noticed a slowdown in the fall. After that, they felt a slight blow to the surface.

There was complete darkness. They turned on the torches, but the light could not reach beyond a 3-meter distance. There was only dust all around the place. Astronauts were blanked and did not know what to do next. Oxygen and nutrition reserves were enough for a very long time. They could only wait and hoped for a miracle. Soon, the astronauts fell asleep.

When they woke up, they thought that they were still sleeping. The inner surface of the moon shone with a cool white light. The temperature was stable at 0 degrees. Coming out of the module, they saw a strange picture. Stones gathered around the module as they were seemed to be looking at the astronauts.

Climbing the hill, the astronauts looked around. They noticed a nearby glow and strange static discharges. On the surface, there were several dozen white light strips of a cylindrical shape. Strange objects poured and shrouded in white lightning bolts.

The astronauts noticed that the stones moved as if they were chasing them. They moved slowly behind the astronauts, leaving grooves in the dust behind them.

Approaching close to the stripes, they scattered in different directions and began to rush around. The astronauts saw a spherical-shaped object that shimmered in different colors. While approaching the object, it acted like a mirror reflecting everything around. One of the astronauts told to remove the protective mirror glass in the spacesuit.

Having removed the glass, the sphere again became transparent and began to shimmer in different colors. After exploring the sphere, the astronauts decided to go into it. Entering it, they became weightless. Through the sphere, it was visible how moving stones surround it. The sphere began to rise. It was clearly visible mountains of a strange shape, strange stone objects, and a large number of groups of stones in the form of pyramids. The astronauts took several panoramic shots.

Rising to a considerable height, the inner cold light went out, only white stripes flew. The sphere was getting closer and closer towards the crater, from where the astronauts dropped out. Having flown up to the crater from the inside, it began to open slightly. It turned out they had not fallen anywhere; they were simply struck by lunar static lightning.

The group took off and went to Earth. Upon arrival, they were asked why the connection had been interrupted. They said that they had been most likely shocked. The strange thing is that they all had the same dream. Their photos, videos, audio materials were seized and studied. While studying, it was found out that there is extraterrestrial non-protein life on the moon. Moonstones are extraterrestrial living organisms fed by the static current. Their distant relatives are on Earth in Death Valley. The astronauts’ leadership decided that humanity was not yet ready for such contacts. They secreted all the materials and stopped flying to the moon. After 50 years, the technological process has reached a level that would be in contact with another form of life. But humanity still will not say anything. As usual, everything will be classified!