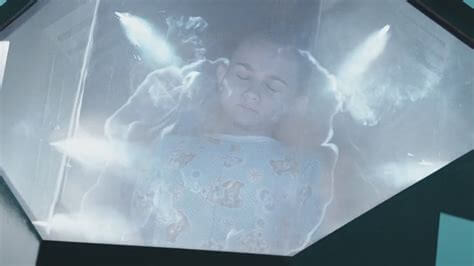 Rise and shine! You’ve been asleep for 1,000 years! And the view outside is not how you remembered it. Trees, wildlife, fresh air, fresh water. Oh, right.

Rising temperatures, rising sea levels, declining air quality, more extreme weather, more animal extinctions, more diseases. These are just a few of the consequences we can expect if we continue to pollute the Earth.

And our time to act is quickly running out. So what can we do if we want to save our planet, and fast? Strangely enough, the best thing to do might be nothing.

Not “sit back and watch the world burn” nothing. But everyone going to sleep and doing nothing for 1,000 years, while the world repairs itself from all the damage we’ve done.

There are almost 300 cryogenically frozen individuals in the United States, and 50 in Russia. And yet, no one has ever been revived from cryosleep. The hope is that the technology to wake people up from cryosleep will be available sometime in the near future.

The idea behind cryonics is that humans can be preserved at super low temperatures, and later be restored to full health. Support for cryonics is based on the fact that many living things, including human embryos, can be successfully cryopreserved and revived.

Existing cryopreservation techniques can even preserve the fine structure of the brain. However, we can’t unfreeze a brain and make it work again – yet. But suppose we perfected the process, and made it possible to cryogenically preserve our world’s population of 8 billion people.

Where would we put everybody? The most practical setup would be to have cryosleep chambers in big facilities around the world. This would make it easier to respond to any technical difficulties that might arise, while also protecting people from the inevitable decay of our infrastructure.

But it’s not like every human-made structure would fall apart and disappear, because not everyone would be asleep. We’d need some volunteers, appointees, or “lucky” winners of a draw to keep everything running smoothly.

Australian geneticist Ian Franklin and American biologist Michael Soule suggest that you need at least 500 people to maintain a stable population with enough genetic variety. But with most of the world’s population in cryosleep, our impact on the planet would be rolled back.

Our cities would start to fill with plants, trees, and vines. And new rivers would form, since subway tunnels would flood without pumps working to keep the water out. After a few hundred years, many species of plants and animals would bounce back to their original levels, before we evolved and took over the planet.

After 500 years, the forests would be the healthiest they’ve been in the last 10,000 years. When we’d finally wake, 1,000 years in the future, we wouldn’t recognize the world outside. The planet would be lush and green. But our homes and most of our cities would be gone.

There’d be lots of rebuilding to do once everyone awakes. But it wouldn’t go back to the way things were. The whole reason why the Earth’s population went into cryosleep was to repair our planet.

We’d likely put strict laws and policies in place, to ensure that our new way of life doesn’t waste our crucial second chance. After all, we’d still have some poignant reminders of our toxic legacy.

It would take more than 1,000 years for our carbon dioxide levels to return to normal, while radioactive material and longlasting organic chemicals could be around for much longer. Microplastics, for example, will still exist hundreds of millions of years from now, unless we find a way to help them decompose.

So while “sleeping off” the effects of climate change sounds like a relatively easy way to undo the damage we’ve caused to our planet, we probably won’t have the technology to do it anytime soon. Can we really afford to wait? The consequences of climate change are already causing major problems around the world.