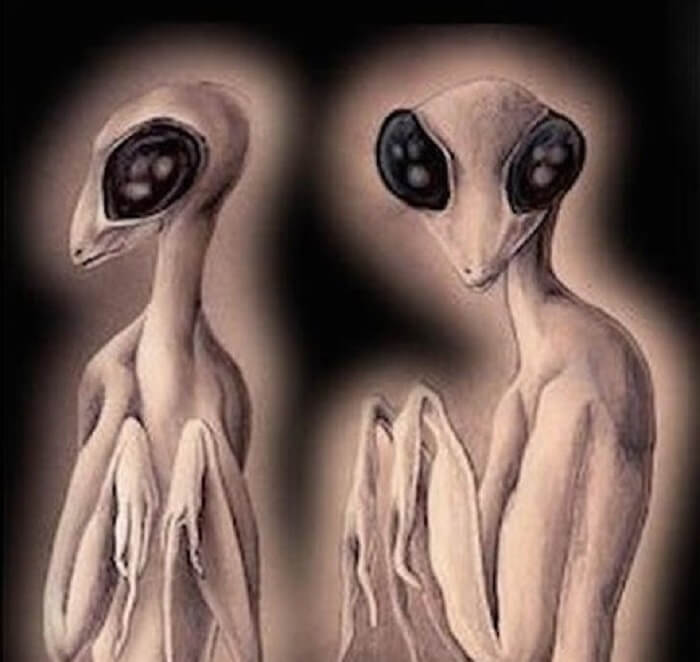 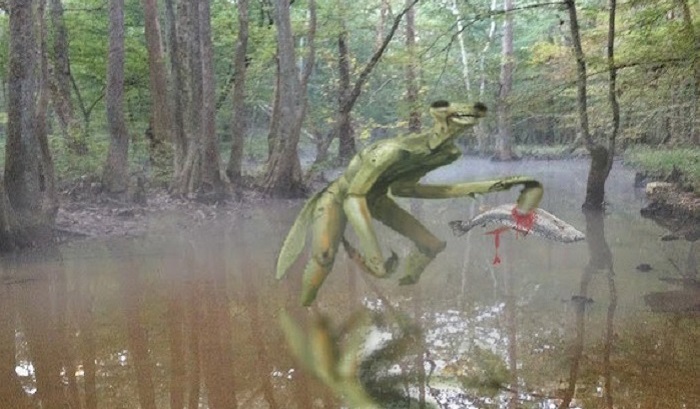 The most common image, mainly in movies and TV shows, of the extraterrestrials is the so-called Gray – low-growth aliens with grayish skin, big head and big black eyes.

The aliens of the reptiloid species are much less common, and even more rare are the so-called Nordics – similar to humans of the northern type, fair-haired and blue-eyed.

But, the strangest and rarest are perhaps the insect-like aliens – Insectoids. Moreover, we know almost nothing about them. The Grays are conducting genetic experiments, the Nordics want to warn Earthlings about a major disaster and they want to help them, Reptiles are aggressive predators.

Insectoids are often called Mantis Men because they look mostly like weak and tall mantis.

According to eyewitness descriptions, the insectoids are tall, not less than 2 meters high, with a lean and slender body, thin limbs. They have triangular mantis-like heads, small eyes and a tiny mouth. They do not wear clothing, and their bodies are covered with something like a rigid and segmented chitinous shell, such as in insects. They differ in male and female, but externally these differences are almost imperceptible.

There have been very few reported cases where Insectoids have personally performed cruel and painful experiments with humans.

In 2002, two residents of New Jersey went fishing at Stephens State Park near Hackettstown. They were fishing quietly on the river bank when one of them suddenly felt a strange vibration in his right ear. He looked away and saw a mantis-like creature about 2 meters high.

The creature was standing on the shore and his arms were bent in prayer. His head was triangular and small. The creature had a black and gray color. It disappeared as suddenly as it appeared.

In 2004, in the same area of ​​Stephens State Park, another fisherman saw a similar creature.

“I caught his movement with the corner of my eye, and when I turned around, I saw a humanoid. He was tall, like a man. His legs were long and his knees turned back like a grasshopper. He looked at me with huge, slightly laid-back black eyes on a triangular head. His whole appearance reminded me of a mantis.

His body was somehow irregular and unstable, but it was clear that this creature was strong. I stared at it for a few seconds, and then it disappeared as if it had “leaked out” into another reality. Later, when I thought what he looked like, I remembered that his hands were not like a mantis, but there were humanoid fingers.

In July 2014, another eyewitness saw a similar creature, again in the same Stephens State Park area, also by the river.

Maybe these creatures have a base somewhere nearby …?

This time, the creature was not on the shore but in the water near the shore. So in the beginning, the eyewitness confused him with another fisherman. But when he looked at it better, the man realized that he was not human at all.

“I was going home on Newburgh Rd. As I was driving over the bridge over the river, I saw something like a man in the water near the shore. I took a closer look and realized it was something else. I even slowed down the car to see it better.

It was much higher than 2 meters and had long thin arms hanging to his body. Its color was greenish brown and at the same time it was translucent, I could even see the landscape through his body! It was a bright sunny day, but it certainly wasn’t a glimmer of water. “

In 2011, a Connecticut resident came home from work. He drove by the river Thames. As he passed Pequot Avenue, near New London, he saw a reddish-brown creature on the side of the road, resembling a large insect. The creature quickly ran two feet to the side of the road and … jumped into the drainage shaft.

In 2015, in the Big Basin Redwoods State Park area of ​​California, an eyewitness saw something resembling a mantis 2.5 meters high. He saw the creature in just a few seconds, after which it became invisible and disappeared.

In 2001, a London resident saw two “mantis” in his bedroom. In the morning he woke up and barely opened his eyes, seeing two humanoid creatures resembling the mantis that were hovering over him. One was dressed in clothes that looked like black chitin ‘armor’ like beetles and the other was a classic dark green insectoid without ‘armor’.

The limbs and bodies of these creatures consisted of segmented parts, such as the bodies of insects. They were taller than a man.

“One of them lowered his head because he was taller than the ceiling. His head was triangular, with a sharp chin, and there were huge eyes at the top, surrounded by something like eyebrows. Their faces did not express anything.

One mantis bent over me, and there was something long and metallic in his hand. A green ray, like a laser, shot from this object and struck me right in the eye. I was hurt, but I couldn’t move. And even though I could scream, I couldn’t hear my voice at all. Then they threw something like a thin stick right into my skull and I could feel them doing something in it.

I panicked and closed my eyes. Then I heard some hissing sound. When I opened my eyes, there was no one in the room but me. “

Another eyewitness account, which mentions an Insectoid carrying out extremely cruel and painful experiments on humans, was posted on a Canadian UFO and alien site.

The date of the incident is not specified. A man and his girlfriend were kidnapped together at home. They woke up in an unfamiliar room where there were tall insect-like creatures.

“When they caught me and started pushing me somewhere, I saw my friend lying on a table and doing something with him. It was as if they were undergoing surgery, like surgeons. I thought, “Are these aliens?” And they looked like mantis.

As I watched my friend, I saw his head and body cut. They cut it like a piece of raw meat. They pulled out some bones, parts of the brain and others … They did all this quickly and silently, making straight and precise cuts. Then darkness fell and I don’t remember anything else. “

Unfortunately, the site does not indicate what happened to this man. Did the man remain alive after such an operation? Or did he not come back alive as his girlfriend.