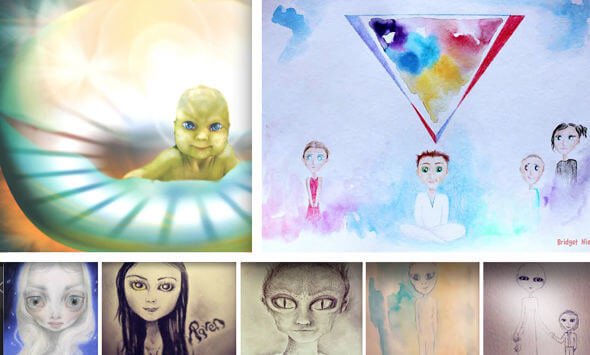 The US-based Hybrid Children Community, is trying to recruit more parent breeders, in a bid top “evolve” the human race into a new sub-species which will take over the Earth when the children currently conveniently housed on giant space ships “return to our planet”.

Women in the group, who include young glamorous 20-somethings, even claim mating with reptile-like lizards was the best sex they have ever experienced.

These include Bridget Nielsen, 27, from Sedona, Arizona, who is a hybrid mum and medium who charges $65 (£46) for an over the phone session to put parents, who believe they may have conceived hybrid children, in touch with their offspring, according to the community’s website.

Describing sex with a lizard being on a spaceship, she said: “It was great. It was an incredible super primal, super raw, super primal sexual experience.

“There was a really freedom and we were really going for it. It was the best sex I ever had.”

Between them Bridget and Aluna claim to have 13 children fathered by aliens.

The website, which also charges for other similar sessions and asks for donations, says there are millions of hybrid parents on Earth who have conceived children with aliens either through artificial insemination or full sex, and many remain unaware.

The community was founded by Sharon McCormick, aged in her 60s, and former marketing executive Miss Nielsen.

On the website Ms McCormick says: “Since I discovered six and a half years ago that I have many hybrid children, my mission in life has become to help spread the word that they’re real, positive and loving, and to support the parents, siblings and friends of these remarkable kids.

“The concept of hybrid children is so new to so many of us that I believe connecting with each other is of primary importance for moving us all ahead toward the day when we will be vibrationally ready for the children to arrive on Earth.”

Members of the group believe aliens have been harvesting their DNA to create children that combine the best of both human and alien characteristics over a period several years.