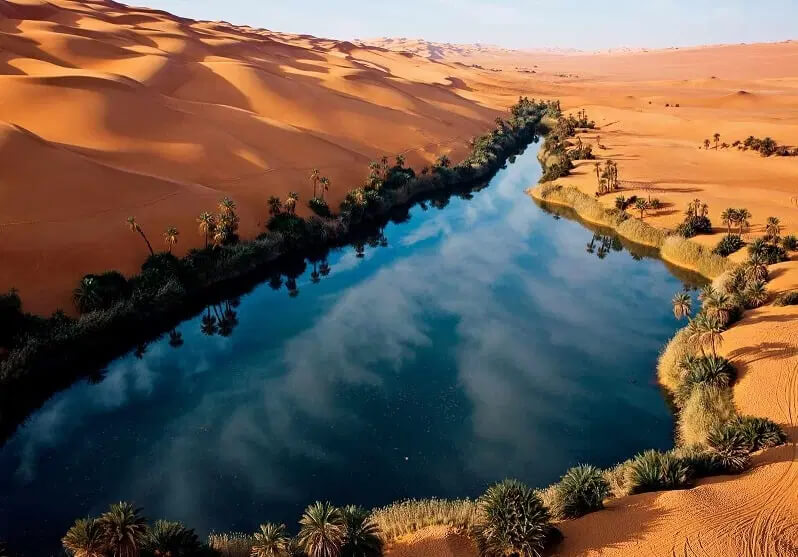 In the wasteland of the Sahara Desert, there may be ruins of several ancient civilizations that were lost in time. When motor cars and the aviation industry became available, many voyagers and travelers tried to search for various lost cities of ancient civilizations in the desert, as more than 4000 years ago, it used to be a lush region with many plants and animals.

People from Dakhla, Farafra, and Baharia, often told legends of lost cities, oases, and lost treasure in that area. From there comes a legend of lost oasis “Zerzura.”

The 15th-century Arabic manuscript “Kitab al Kanuz” (The Book of Hidden Pearls) describes Zerzura as a city built with white stones and full of treasure. It was a home for the sleeping king and queen, whose gate had a carved bird with a key in its beak. The manuscript also talks about black giants who guarded the city. There is no information about the date and author of the manuscript.

English Egyptologist John Gardner Wilkinson was the first who mentioned the location of Zerzura in his book “Topography of Thebes and a General View of Egypt,” dated 1835. His reference was based on the tale of an Arab who found the lost oasis while looking for his camel.

He described the location of the lost oasis as follows:

“Zerzura is only two or three days due west from Dakhleh, beyond which is another wadi (valley); then a second abounding in cattle; then Gebabo and Tazerbo; and beyond these is Wadi Rebeena; Gebabo is inhabited by two tribes of blacks, the Simertayn and Ergezayn.

About five or six days west of the road from el Hez to Farafra is another oasis called Wadee Zerzoora abounding in palms, with springs, and some ruins of uncertain date. The inhabitants are blacks.”

The search for Zerzura began at the beginning of the 20th century. An explorer named William Joseph Harding King started his expedition to find the mystical oasis in 1909. Until 1911, he had done several journeys along the trade road, southwest from Dakhla. He knew some tales of a lost city full of palms and olive groves. He was convinced that he would find Zerzura after finding olives in the stomachs of some birds that had flown from the southwest. Unfortunate, he never found any abandoned city. Some clay pots were found by John Ball, a director of the Egypt Survey Department 160 km from Dakhla six years later, but no lost city.

The major breakthrough in the search of legendary Zerzura happened between 1932 and 1934. A group of 4 people including Ladislaus E. Almasy, Robert Clayton East Clayton, Hubert G. Penderel, and Patrik Clayton found a clue in Wilkinson’s quote. They set out their expedition in the search of Zerzura. They found “three green valleys” after six days of the journey in the northwestern section of the Gilf Kebir-Plateau, near the Libyan border.

The locals of Dhakla gave the information of the stone temple to Harding King in 1910. Surprisingly, the location of the temple correlated with Zerzura’s location as cited by Wilkinson. Indeed, the stone temple was found with rocky slabs full of ancient Egyptian hieroglyphics and the name of the 4th dynasty king Djedefre. These findings led to a new time-span of Egyptians in the oasis in the western desert.

The debate over whether Zerzura had been found or not continued for years. Wilkinson was told by Dakhla’s locals that there was a mysterious oasis formed by the three green valleys. The three valleys associated with Zerzura are “Talh,” “Abd el Melik” and “Wadi Hamra” (valley in Gilf Kebir). Hamra valley is known for vegetation, acacia trees, and rock carvings. It is obvious that water still runs under the valley but now, the sand buried it.

No one knows where exactly Zerzura was, but some people assume the three green valleys could be Zerzura or it was just a myth. Even though no oasis full of treasure was ever found, the years of search and expedition created a wealth of knowledge about the desert dunes.

Zerzura’s exploration helped NASA in the successful landing of an unmanned probe (Viking 1) on the Martian desert dunes in 1977. British explorer Ralph Bagnold and others from an enterprising group found that they could traverse light-weight vehicles on the dunes by lowering tire pressures, which helped NASA on how to land a probe on Mars.