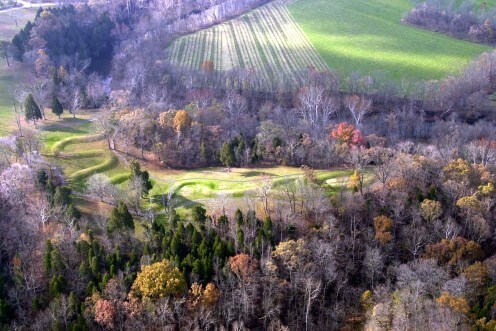 Archaeology is one of Kelley’s great passions. He’s read many books on the subject, as well as every issue of “Archaeology” since 1987.

This mysterious structure boggles the mind

Serpent Mound, a quarter-mile long effigy in Adams County, Ohio, has astounded researchers since its discovery by Europeans in the early 1800s. This long, sinuous earthen mound in the shape of a coiling snake is the largest such effigy found in the world.

Who built this strange thing? And, perhaps of greater importance, why did they build it? The purpose of this article is to discuss the possibility that people from another planetary system may have constructed it or at least motivated or inspired the American Indians to do so.

Who Built the Mound?

Per archaeological investigations in the 1880s, the builders of the mound, 1,370 feet in length, were the people of the Adena Culture, which existed from about 1000 B.C.E. to the year one. The primarily evidence for this discovery is that Adena-era burial mounds were found near the Serpent Mound. Moreover, the Adena Culture is known for constructing elaborate earthen mounds and medicine circles throughout what is now the state of Ohio.

So, according to this investigation, the mound was apparently two to 3,000 years old. One problem with dating the mound is that no artifacts or burials have been found within Serpent Mound itself.

Why was the Mound Built?

We may never know for certain why this earthen thing was created. But bear in mind that in the ancient world the serpent was considered a sacred creature throughout North America, and many Native Americans still consider it so. Perhaps some readers are familiar with Quetzalcoatl, the feathered-serpent of Mesoamerican lore.

Since Serpent Mound hadn’t been scientifically investigated since the 1880s, the time for more digging seemed at hand. According to an article entitled “Redating Serpent Mound” in the November/December 1996 issue of Archaeology magazine, archaeologists from the University of Pittsburgh took two samples of wood charcoal from the snake-shaped mound and subjected these samples to radiocarbon dating. The results showed that the mound was built about A.D. 1070, some two thousand years later than earlier investigations. This evidence would seem to show that the mound was built by the Fort Ancient Culture (A.D. 900-1600), a Mississippian culture that flourished in the central Ohio Valley.

Keep in mind some experts claim that the accuracy of radiocarbon dating can be affected by the weathering of the site, making the charcoal appear more recent in origin.

Supporting the exactness of this radiocarbon dating, many other earthen mounds were constructed during this era in the Ohio Valley and valleys of the Mississippi River. Perhaps the most prominent of these impressive earthworks can be found at Cahokia Mounds near Collinsville, Illinois.

Astonishingly, this date of 1070 coincides with two dates of astronomical note. In 1054, light from a supernova – as recorded by Chinese astronomers – reached the earth and stayed visible for two weeks, even during daylight hours. This cosmic explosion created what’s known as the Crab Nebula in the constellation Taurus. Also, in 1066, Halley’s Comet made its brightest approach of the earth (the comet returns every 76 years).

Were the area’s inhabitants reacting to these unusual celestial events when they constructed the mound?

The mound appears to be aligned with the summer solstice sunset, the winter solstice sunrise, both equinoxes, and the seven coils of the serpent may be aligned to the lunar cycle. The mound also may have been designed to agree with the stars in the constellation Draco (the dragon). This constellation holds the star Alpha Draconis, also known as Thuban, which was the Pole Star some 5,000 years ago. Some researchers have dated the mound by calculating how much backward precessionary movement has taken place over the thousands of years since Thuban was the Pole Star.

Constructed at the Edge of a Crater

Experts disagree on what caused the crater, but Serpent Mound rests near the rim of a crater formed by either volcanic activity or the impact of a meteorite some 250 million years ago during the Permian Period. Interestingly, this was about the time a mass extinction destroyed some 70 per cent of all land animals on the planet! But it’s doubtful the crater motivated ancient Americans to build the mound since the outline of the crater is not easily seen.

The Case for Ancient Aliens

According the TV program Ancient Aliens, on an episode entitled “Aliens and the Old West” produced in 2011, the mound effigy appears as if it were supposed to be viewed from the sky, a perception similar to the famous Nazca Lines in Peru, which can only be seen in their entirety when viewed from hundreds of feet in the air.

Also, According to local Indian myth, flocks of birds often fly in circles near the mound, apparently disoriented by supposed magnetic anomalies in the area. Modern compasses used near the mound also have trouble finding true north. In fact, the mound is built near the rim of a crater, perhaps caused by a meteorite, which could have brought elements such as iron to the area. The presence if iron, of course, could cause such magnetic peculiarities.

Other elements such as iridium and uranium could have been deposited as well by the meteorite. One enthusiast on the program claimed this meteorite crashed to the earth about 300,000 years ago, a dating quite different than the aforementioned 250 million years!

Interestingly, caves or tunnels can been found beneath the plateau upon which the mound was constructed. Could aliens have used these tunnels to mine the elements brought by the rock from the sky?

The program also suggested that the plateau upon which the mound rests is composed of dolomite, a high grade of limestone that might act as a semiconductor of electricity. In times past could the mound have been used to attract lightning and thereby generate and perhaps store electrical power?

It’s hard to figure the purpose of this enigmatic Serpent Mound, if for no other reason than scientists and enthusiasts can’t seem to agree how old the mound really is. Nevertheless, the author would like to deduce and speculate:

Firstly, could Aliens have built the mound so they could easily locate the valuable meteoritic elements such as iron, iridium and uranium? It seems interstellar voyagers could have simply used a homing beacon or GPS device to locate the deposits. Secondly, could the mound have been used to generate and/or store electricity? Surely people capable of travelling from one star system to another wouldn’t need such a capability. After all, there’s plenty of hydrogen in earth’s oceans to generate power, lots of solar energy to utilize and hydrocarbons to be burned as well. Thirdly, if ancient aliens had the inclination or need to build the mound, would they have used earth to make it? They just as easily could have used the limestone or iron found in the area. (Iron makes a great conductor of electricity, by the way.)

Could the Indians in the area have built the mound to generate their own electricity? Since there’s no evidence they had electrical devices, why would they need electricity?

It’s much easier to believe that the ancient people of Ohio built the mound rather than extraterrestrials. Extraordinary claims require extraordinary evidence and there simply isn’t much to prove the ET hypothesis regarding the construction of Serpent Mound. It’s much easier to imagine that the Native Americans in the area were inspired by the heavenly events that took place around 1070, as the radiocarbon dating seems to indicate, and then they built the mound using whatever astronomical data they had at the time. This sort of thing was done throughout antiquity in many other parts of the world.

Hey, maybe the local Indians built Serpent Mound simply for the pleasure of producing a wonderful work of art!