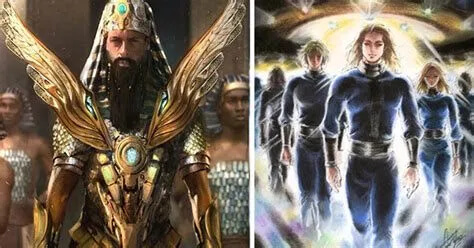 One such possible theory as per the ancient cultures is the possibility of a historical alien between the Anunnaki and the Pleiadians.
And the reason behind the war was- who will control and rule over Earth?

Earth is the only planet that supports life and it continues to be a real enigma.
According to science and religion, the foundations of humanity are perfectly established, but coming across the records of ancient cultures, those that existed during that time, we realized that the story is totally different.

How did humanity emerge on the planet Earth in the first place?
Who or what created the humans?
According to many of these ancient records that support different theories, the human civilization was aided by extraterrestrial civilizations.
Especially by the Anunnaki and the Pleiadians.

Alien Races That Visited The Earth

In Sumerian mythology, the Anunnaki were a pantheon of good and evil gods and goddesses (duality) who came to Earth to create the human race. According to some resources, these gods came from Nibiru.

One of the best-known theories about human creation mention how the Anunnaki settled on Earth, developing cities and control bases.
It is believed that they were extremely similar to modern humans in the aspect of physical appearance.
Simply put, they were humanoid in appearance.
However, the major difference between these beings and humans was their skin, which was grayish hue in comparison.

Due to an ecological cataclysm on their home planet Nibiru, they had to travel to Earth in search of gold.
This story is found in different ancient civilizations; especially in Sumerian mythology.
The Sumerians said that a year on Planet Nibiru (A SARS), is equivalent in time to 3,600 years of land.
The Anunnaki life expectancy was 120 SARS, which is 120 x 3,600 or 432,000 years.

It is believed by the theorists that the Pleiadians were unconditional beings, who moved through love, wisdom, and light.
The Pleiadians are believed to be much older than humanity, hence it was more developed, both spiritually and technologically.
They had a greater sense of empathy, which always made them want to be in solidarity with others, however, they descended upon earth to help humanity

Thus, we can find them in practically all the ancient cultures, where they are recorded as beings who arrived from the cluster of the Pleiades, with different names but with an almost identical history.

War Between The Annunaki And The Pleiadians

Many theories in relation to this war mention that the deities that came from the heavens referred to these beings that came from space, drove humanity to its development, and later helped to come out of a slave yoke to give them freedom.

The first humans, with their basic knowledge and rudimentary tools, observed the great abilities that aliens possessed and the things they were capable of doing.
Sometimes, the things that were totally out of reach and understanding.
Humans began to worship them as superior beings, learning from them their techniques and signifying a full stop in human history.

However, the Pleiadians, being harmonious and light beings, did not agree with the slavery attitude that the Anunnaki had towards humans, which began to create differences between both civilizations.

The Sumerian civilization, the first human civilization as we know it, came to an abrupt end in mid- 2024 BC.
It is believed that a mysterious radioactive cloud brought by the winds from the Sinai Peninsula turned out to be deadly for them.

How is it possible that a radioactive cloud appeared out of nowhere, wiping out a civilization that was centuries old?

The most logical answer, with our current knowledge, is that they became the victim of the ravages of a nuclear explosion.
The explosion produced by the war between the Anunnaki and the Pleiadians in search of taking control of the planet.

Obviously, to date, there is no record that literally mentions that there was a war in history that we have always been led to believe.
However, the findings of ancient tablets and writings have given us to understand this possibility.
A possibility that would fill much more voids and tie up the loose ends of traditional history.