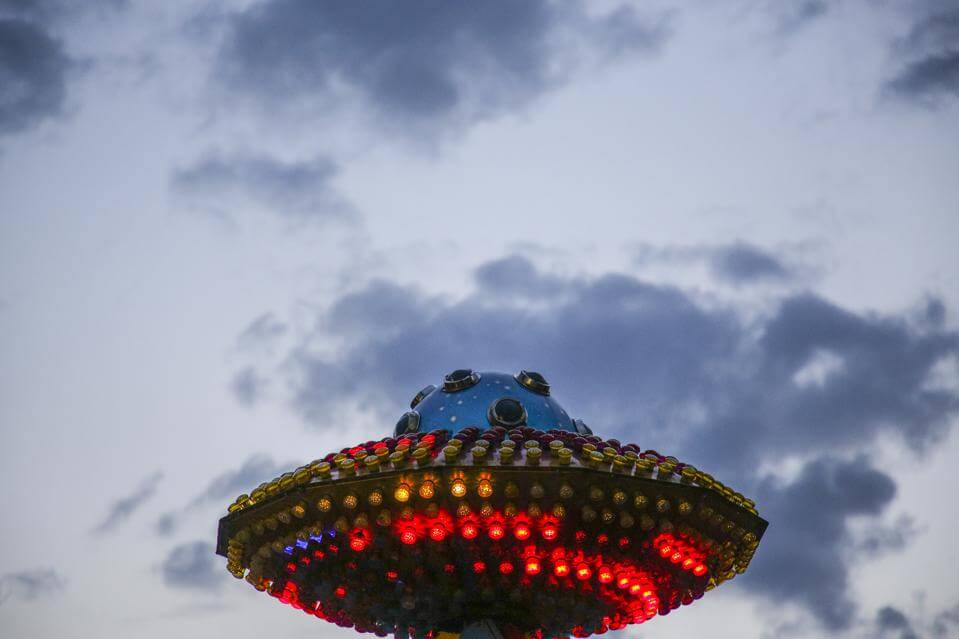 In this world, there are very few issues more polarizing than the notion of aliens. For as long as we’ve been recording history, humans have wondered whether we’re alone or not. Now that astronomy has advanced to the point where we know that:

Given that life has survived, thrived, and evolved into something as complex, differentiated, intelligent, and technologically advanced as human beings here on Earth, it compels one to wonder: are we alone?

And moreover, if we aren’t alone, have technologically advanced aliens already arrived here on Earth? While there haven’t been any definitive extraterrestrials yet discovered here, the presence of UFOs — unidentified flying objects, or as they’ve recently been rebranded, UAPs, for unexplained aerial phenomena — has led some to believe that they may already be here. Yet scientists seem to be disinterested in this line of thought. Why is this the case? Let’s take an in-depth look, from an astronomer’s perspective.

What Is Behind The U.S. Navy’s ‘UFO’ Fusion Energy Patent?

‘Triple Vision’ Image Of Jupiter Shows What’s Beneath Its Clouds

Ask Ethan: How Can A Non-Expert Evaluate Conflicting Claims By Actual Experts?

When you’re thinking like a scientist, the top issue you’re typically concerned with is how we can advance the state of knowledge of humanity. Typically, there are things that are known with a strong degree of certainty, and that serves as our starting point. We can start with the idea that we know the laws of physics: General Relativity for gravitation, Quantum Field Theory for the other forces and interactions. We can also fold in all of the observations we’ve collected over the years, which we interpret through the lens of our cosmic theories. Combined, they’ve taught us an enormous amount about the Universe.

They’ve also led us to a picture where we have three robust lines of approach to searching for life beyond Earth.

But only rarely, in a similar vein, do scientists mention UFOs or UAPs as a possibility for alien life. Many outside the scientific community wonder about this. After all, isn’t it equally possible that aliens aren’t just waiting to be discovered in these locations where we’re looking, but that if alien life is plentiful, then perhaps there are species of aliens located throughout the galaxy that rose to prominence long before human beings did?

If that’s the case, wouldn’t they be advanced enough by now — even if they’re only a few thousand years ahead of us, technologically — that they could have spread throughout the galaxy, hiding their presence if they so wished, with capabilities that far exceed our own? That’s one possible explanation for these aerial phenomena, of course, but we also have to consider the other, more mundane ones.

Recently, however, a series of documents and videos have been declassified by the United States government, including three videos of unexplained aerial phenomena that have recently gained a lot of attention. Let’s take a look at all three of them.

The first video, which was taken from a US Navy training flight in 2004, clearly shows an unidentified aerial object, displaying a shape similar to a tic tac: an elongated capsule. It appears in the instrument’s sights in the videos above, lasting a little over a minute, until it speedily moves off to the left side just prior to the video’s end.

This video, along with two others, was declassified and released by the Pentagon in 2020 after two leaks previously: one of this video in 2007 and two more of the subsequent videos (which were shot in 2015) in 2017. The release was accompanied by an acknowledgment “that these videos circulating in the public domain were indeed Navy videos.”

But you can judge a little better for yourself if you examine the other videos, which come with audio as well.

I have to fess up: when I first started watching this video, it looked to me like it was just an insect on the glass, moving along with the aircraft. But as the seconds ticked by, a few other phenomena became notable. First off, there was another bright white light in the upper left of the frame, that was clearly moving relative to both the plane and the unidentified object that was being tracked. Was this a part of the instrumentation, or was it a separate unidentified object?

But second, the main object began to move relative to the screen, rotating about its axis. It’s clear that, whatever this is, it’s difficult to explain away. For one, the plane is clearly high above the clouds, which appear below the craft in the video. You can also note that the audio reveals, “there’s a whole fleet of them” and the pilot expresses surprise at what they’re seeing, remarking, “that’s not one of ours, is it?”

Whatever explanation you might concoct for the second video, however, clearly doesn’t apply to the third, which is also from 2015 footage.

This time, there’s a very fast-moving object that they’re attempting to lock onto and track, and you can hear the (very human) emotion that I can only describe as, “Oh yeah!” Clearly, when they capture it in their sights, it leads to a moment of elation. Despite the fact that it’s just a fast-moving white speck, it’s clearly moving rapidly over the water below.

Regardless of what it is, these three videos, released in April of 2020 while the novel coronavirus was still in its first major wave of infections and deaths, spurred the following statement from the Department of Defense:

“After a thorough review, the department has determined that the authorized release of these unclassified videos does not reveal any sensitive capabilities or systems, and does not impinge on any subsequent investigations of military air space incursions by unidentified aerial phenomena. DOD is releasing the videos in order to clear up any misconceptions by the public on whether or not the footage that has been circulating was real, or whether or not there is more to the videos. The aerial phenomena observed in the videos remain characterized as “unidentified.””

When you approach the world like a scientist, your first thought should always be to consider what we call “the null hypothesis.” In science, the null hypothesis basically asks the question, “based on what we know exists today and how we conceive of the world and Universe working, is there a completely sufficient explanation for what we saw that doesn’t invoke anything extraordinary?”

Something extraordinary would include possibilities like new laws of nature, novel technologies that have never been seen before, aliens, or some sort of divine intervention. These lines of thought, however eager we are to pursue them, should only be considered if the null hypothesis can be ruled out.

So what would be explanations for these videos that don’t invoke something extraordinary? Perhaps surprisingly, there are many.

Nobody is disputing that these are unidentified objects, they are flying through the air, they are oddly shaped, and they appear to be obeying the laws of physics. However, that doesn’t mean it’s so easy to identify what they are. Possibilities include:

Some of these are more likely than others, of course, but this isn’t meant to either be an exhaustive list of possibilities nor is it meant to be a list of likely outcomes. It’s meant to illustrate the types of explanations that must be considered and ruled out if one is to abandon the null hypothesis. The angles and magnitudes of accelerations may be unusual, but they are consistent with those achieved by modern military technologies such as missiles; the null hypothesis is not so easy to rule out.

What would it take to do that?

We would need better observations and data, over long periods of time, that confirmed what we were seeing and measuring. We would need to perform tests and thoroughly examine objects without secrecy, and conduct our investigations openly and in a reproducible fashion. And we would need to gather data that could potentially discern the origin and nature of such a phenomenon. Unfortunately, in this case, we only have the data and information that we have.

So why is all of this coming to light now, and why is it creating such a stir?

According to Lue Elizondo, the original head of the Advanced Aerospace Threat Identification Program (AATIP) that investigated and tracked these UFO/UAP phenomena from 2007-2012,

“The government has already stated for the record that they’re real… The mission of AATIP was quite simple, it was to collect and analyze information involving anomalous aerial vehicles, what in the vernacular you call them UFOs; we call them UAPs… I’m telling you, it’s real. The question is, what is it? What are its intentions? What are its capabilities?”

This doesn’t necessarily mean “aliens,” of course. It could be a foreign or domestic set of agents — working either with or without the government’s knowledge in some capacity — that are in our airspace for some reason. The main concern cited is that this could pose a hazard to aviation safety, which fortunately has never yet occurred.

What’s highly suspicious about this, however, is that the entire publicity campaign surrounding this set of phenomena, and Elizondo himself, seems to be working under the auspices not of the United States government, but rather from an entertainment company fronted by Tom DeLonge (of Blink-182 fame) called To The Stars… Academy of Arts & Sciences. This publicity blitz only started in 2017, when Elizondo joined the then-almost-defunct original incarnation of To The Stars, refocusing it on paranormal studies and on the UFO/UAP phenomenon in particular.

The concern, of course, is that these are nothing but mundane, terrestrial, possibly even human-created phenomena, that are being disingenuously promoted to the general public as being something extraordinary as a means to further sow distrust in both science and government. However, the conspiracy-laden idea that scientists know more about these than we’re letting on is absurd. As Benjamin Franklin famously put it, “three may keep a secret, if two of them are dead.”

The reason scientists don’t talk very much about UFOs or UAPs is simple: without sufficient data, we cannot draw any meaningful conclusions. It’s very easy to throw out an idea (or a guess) as to what each of these videos might actually be showing, and many scientists and non-scientists alike have eagerly done exactly that. However, what we’d like to do, as scientists, is to gather enough data to determine what these objects are likely to be. At present, it would be the height of irresponsibility to claim that we have that information.

We simply don’t know what they are. Are they unidentified? Absolutely. Unexplained? At least so far. Are they “flying” or aerial entities? Almost certainly; they certainly appear to be. And are they objects or phenomena? Sure; those words are nebulous enough that they apply equally to jumbo jets as they do to aurorae. What you mustn’t do, however, is to draw a fantastic conclusion — like “these objects must be aliens” — without sufficient evidence to do so. Given that these UFOs/UAPs are most frequently seen in areas with military presences, and have never been recorded in the professional telescopes of astronomers, the null hypothesis of these being terrestrial phenomena must continue to be our default position.

Starts With A Bang

Contributor Group
Science
The Universe is out there, waiting for you to discover it.
Share on social media Share on FacebookShare on TwitterShare on LinkedinShare on PinterestShare on XingShare on Reddit