On the evening of September 27, 1989, an event took place in the city of Voronezh, 300 miles southeast of Moscow in what was then the Soviet Union, which would shock not only the citizens of that city, but people all around the world.

At about 6:30 pm, a curious pink light appeared in the sky above a crowded city park. As park goers craned their necks skyward to examine it, a deep-red orb approximately 10 meters in diameter suddenly emerged from the light and began circling the park.

Without warning, a hatch opened on the lower part of the orb and a humanoid figure appeared in the opening. The figure was extremely tall, some three meters or more by most accounts, yet had a very small head. It was dressed in silvery overalls and bronze boots, and on its tiny head were three eyes, the central of which rotated like a radar, appearing to look the park over.

After a few moments, the hatch closed and the orb descended further, landing on the ground in the middle of the park. Again, the hatch opened, and the humanoid figure emerged, this time exiting the craft with what appeared to be a small robot. 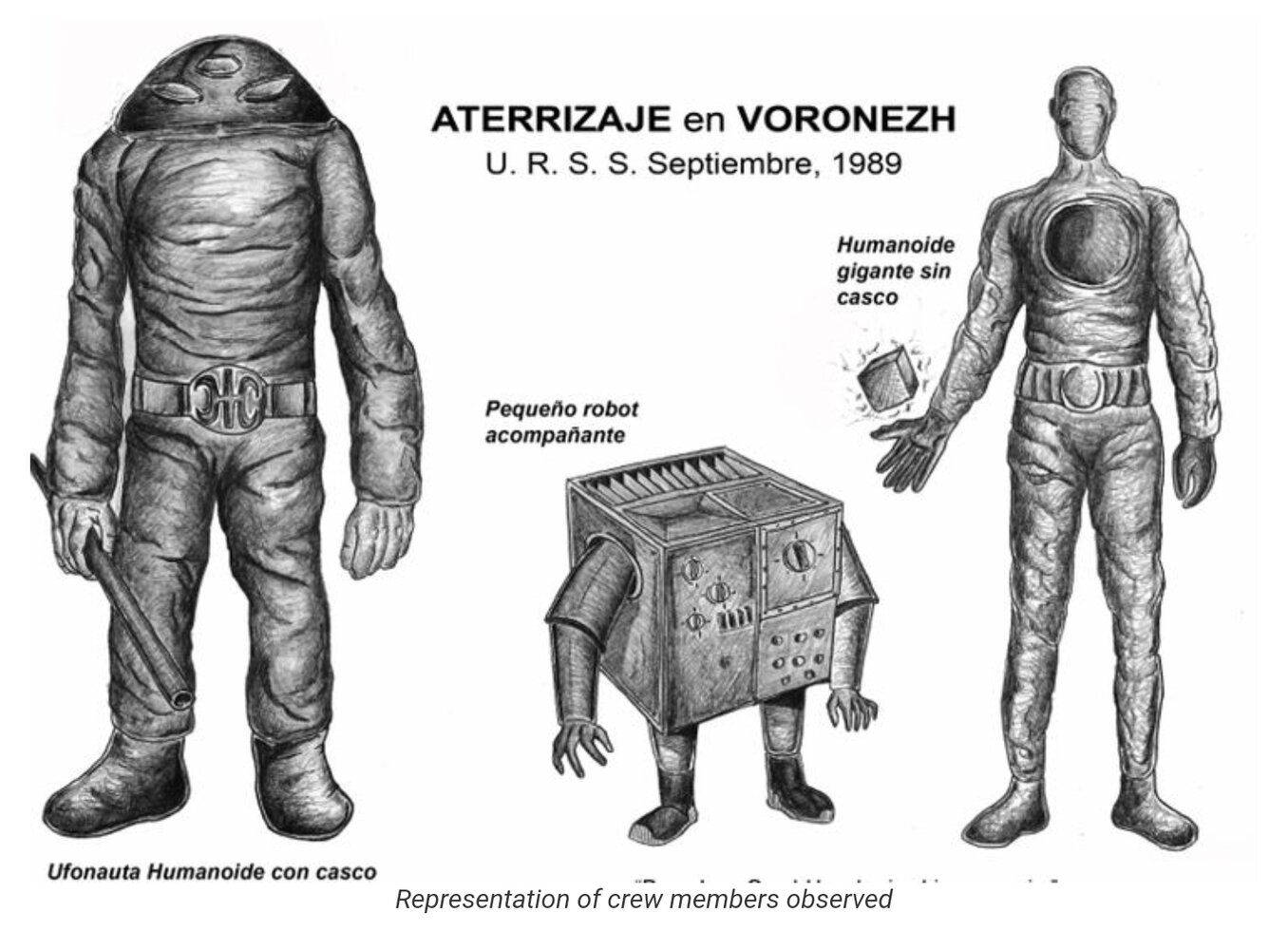 This was too much for some in the crowd of onlookers. One teenage boy began screaming in fear. But when he did, the humanoid figure turned and looked directly at him, three eyes beginning to shine brightly, and the boy fell silent, unable to move, paralyzed and frozen in place.

This caused others in the crowd to begin to scream, but the humanoid was not finished. Returning into the orb, the humanoid reemerged with “what looked like a gun” and pointed it at the boy, causing him to vanish into thin air.

This only made the screams louder, until finally, the humanoid returned into the orb and took off, disappearing into the evening sky. As it did, the boy reappeared, confused, but otherwise no worse for wear, while all who had witnessed the event were left “overwhelmed with a fear that lasted for several days.”

When the story was reported in the Soviet newspaper TASS the next day, it caused an uproar. This was no ordinary alien encounter, experienced by one or two people in the middle of the night. No, this had taken place in broad daylight in front of numerous witnesses.

Immediately, military personnel were rushed to the area to interview witnesses, and what they found was the same unbelievable story, repeated again and again, by witness after witness.

In short order, teams of scientists descended on the park to try to ascertain what had happened. Days later, a report issued by one of these teams proclaimed, “scientists have confirmed that an unidentified flying object recently landed in a park in the Russian city of Voronezh. They have also identified the landing site and found traces of aliens who made a short promenade about the park.”

According to Genrikh Silanov, the head of the Voronezh Geophysical Laboratory, scientists found a 20-yard depression with four deep dents, where landing gear would presumably have rested. Additionally, the entire area was found to possess elevated levels of the radioactive isotope cesium.

More incredibly, two pieces of unidentifiable rock were also recovered. In Silanov’s words, ″at first glance, they looked like sandstone of a deep-red color. However, mineralogical analysis has shown that the substance cannot be found on Earth.”

Scientists and military personnel could not figure it out; it really did look like an encounter had taken place with something from out of this world.

The story was so incredible that it was picked up by media all over the world.

In the US, numerous reports emerged trumpeting “a close encounter of the communist kind.” The Washington Post published an article titled, “Comrades from the Red Star,” while The New York Times ran a headline reading, “U.F.O. Landing Is Fact, Not Fantasy, the Russians Insist.” On NBC Nightly News, Tom Brokaw led the broadcast by proclaiming, “space aliens are said to have landed in a UFO,” while even Time Magazine ran a report describing the “three-eyed space creature” which “zapped a 16-year-old boy with a gun that made him disappear temporarily.”

In no time, the encounter in Voronezh became one of the most famous UFO incidents in history, known about and discussed all over the world. And yet, what is perhaps most amazing about the encounter is it was not the only one of its kind which took place in and around Voronezh at that time.

In the weeks and months surrounding the September 27th incident, numerous other similar encounters were reported in the area. Many included similar stories of tall humanoids with tiny heads emerging from glowing orbs, often in one of the city’s parks. In fact, a book published in 1990 and appropriately titled “UFOs in Voronezh” recorded dozens of incidents taking place in the area between August of 1989 and January of 1990.

Perhaps the most dramatic of all these incidents took place on the evening of October 2 at a train station only a few miles from the park where the September 27th encounter had taken place. On that evening, about 40 people were getting off the train when they noticed a red orb in the sky executing “jumps” up and down over a nearby field. Eventually, the orb landed, and a tall humanoid figure emerged from it carrying some sort of baton. The figure pointed the baton down to the ground and into the earth, as if it was collecting soil samples, before slowly returning to its craft, and disappearing into the night sky.

What was happening in Voronezh at this time? Who were these alien figures in their mysterious orbs, and what were they doing?

An attempt to answer these questions begins by realizing that it was not just in Voronezh that this was happening. All through the late-1980s, Soviet newspapers across the country were filled with reports of UFO sightings and alien encounters, from ordinary citizens, as well as from pilots, air traffic controllers, astronomers, and military personnel.

In fact, one newspaper – Komsomolskaya Pravda – even claimed it had obtained an interview between one of its reporters and an alien.

“Where are you from?” journalist Pavel Mukhortov allegedly asked the alien.

“The constellation Libra, Red Star, Our Homeland,” the alien replied.

“It depends on the center. We are directed by a central system.”

“Can you take me to your planet?”

“There would be no return for you and it would be dangerous for us.”

“Why would it be dangerous?”

What was going on here? Why were there so many reports of aliens and UFOs in Soviet media at this time? Did aliens have some sort of specific interest in the Soviet Union?

Some argue that a rise in news reports about UFOs and alien encounters was directly related to the new Soviet policy of glasnost.

Adopted in 1986 by Soviet leader Mikhail Gorbachev, glasnost meant an increased “openness and transparency” in the country, including in the activities of state institutions and the freedom of information. According to some, news reports about aliens were media efforts to test how far glasnost would actually go. By presenting something which, according to mainstream thought, was obviously ridiculous, like aliens, the media would test their government and see if they really could talk about anything.

The only problem with this argument is that the Soviet government did not view UFOs and aliens as something ‘obviously ridiculous.’ In fact, a deep interest in the subject extended to the highest levels of Soviet power …