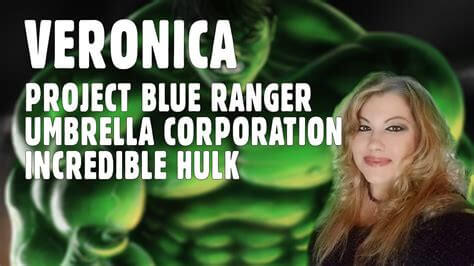 Listen in as Veronica discusses the Hulk program which started out as Project Blue Ranger. He was designed as a cowboy type super soldier, but there was an explosion, mutations occurred, and the incredible hulk was a result. The project was then replicated on other super soldiers including James Rink’s clone Rob Richter and Veronica’s clone by the name of Shelia the She Hulk. Veronica Bartolini was in the SSP as well as Monarch, Montauk, Mannequin, Kruger, Nacht Waffen, Project Crystal Gates working with dolphin super soldiers, and Stargate-1. She was also part of Umbrella Corporation’s Hulk program which started out as at Black Shield as Project Blue Ranger. Her spiritual name is Kum-ru and she has Draco DNA. While in the SSP, Veronica went by the name of SolEl and served on missions to rescue children. Her civilian life includes titles of former police officer, US Army Vet, realtor, behavioral health tech, and recovery coach from trauma. She had a near death experience in 2010 she was dead for three days. In today’s video she will be discussing a channeled conversation with Nikola Tesla, an update on the She hulk and Blue Ranger with drawings. Then we will talk about the people know as the Laquoia.