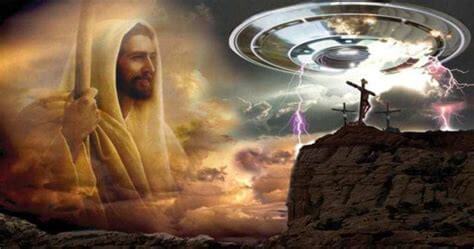 Time has passed and an event happened 20 centuries ago (two thousand years before) remains a mystery that no one can decipher. Was Jesus a being from another world? What happened in his life? how with just three years of public life he influenced so much in the life of all the generations that have passed through this world?(origin of Jesus)

His birth is full of mysteries. Born by the work and grace of the Holy Spirit, he was born in a humble manger in a small town, and did not come to this world with all the honors and distinctions he deserved as the Almighty Being who was to influence humanity so much.

He was born humble and poor. And it happened that three wise men coming from the East came to Bethlehem to worship him. An angel had announced to the Magi the birth of the Messiah and later they were guided in the journey by a star. As it is known, the stars do not move, therefore, it is possible that it was not a star but a UFO, a flying object, the one that directed them. Just as it was a UFO who led the Jews during the Exodus when they left Egypt and there are many events reported in the Bible that can be inferred were UFOs who intervened, as in the rapture of Elijah carried from the hair to the heavens.(origin of Jesus)

According to the writer Vlado Kapetanovich, a Yugoslav who lived in Peru and wrote several books on extraterrestrial life, Jesus would have come to Earth from a planet called Apu and his extraterrestrial name would have been Zay. “It would have happened at a time when the lactic galaxy floated in a negative swirl of the Universe. The Earthlings, laden with negative force, became ambitious, filled with selfishness and hatred, committing all kinds of atrocities. Then Zay descended in Israel, in a region that conserved remains of constructions of previous visits of the Apunianos and followed Nazareth, where a Jewish marriage lived. Maria had just suffered a misfortune as a mother when she lost a child and Zay decided to “be born” as her son.

When young, the carpenter’s son connected with a group of extraterrestrial descent, the Essenes and began writing hundreds of scrolls, mostly in Greek kiné and the rest in Hebrew. “Those scriptures were rules for a new positive way of life, almost unknown to the man of that time. He taught the altruism, the union and the development of the positive powers that each one has in their cells. But as those writings spoke of a pacifist, fraternal ideology, of equality between men and tried to reactivate Essenian teaching, which had already delivered many years before, collided with the concepts of the people of that time and the scrolls had to be hidden in caves, to be revealed later “. Many years and centuries later those scrolls were found and are being studied.(origin of Jesus)

Kapetanovich maintains that the miracles that Jesus did were due to the supernatural powers that he had as a foreigner. Some of those miracles were made by Zay gathering positive ions. For Jesus or Zay it was not impossible to resuscitate a person, turn water into wine, stones into loaves and many times he was forced to perform that kind of magic to convince obtuse people that he needed those demonstrations in order to capture the positive teaching.

Later the writer revealed some passages of the human “judgment” to Jesus and how, having supernatural powers, he had to submit to the whims and demands of some judges, to whom he could convert and change his mind only with thought. “But it was necessary not to vary the free will of each person. People must change for themselves and not for the will of another, “said the writer. Referring to the crucifixion, he affirms that “Jesus did not feel the weight of the cross that was huge and heavy, nor when he was nailed, because he had already dematerialized, since that suffering did not correspond to him, since it was a very advanced Spirit that he only came to Earth to help change humanity and banish the evil that for centuries had caused so many disasters in humanity.

When they reached the place of execution, they laid Jesus on the cross and began to nail him, Jesus had already disintegrated and he did not feel pain. The soldiers and those present saw his image, but nothing was true. He became invisible, approached his mother and whispered in his ear: “Do not cry, mother, your son has not died, he is by your side. Go home, I’ll go right away. ” And while others witnessed “his suffering” and saw him crucified, Jesus was already at his mother’s side, explaining the truth of his life in this earthly world. “Later he moved her to Apu and now Maria is on the planet May.”(origin of Jesus)

It also happened that when the followers of Jesus went to the cave where they had buried him, they were surprised that his body was not there and only a mantle remained. The body of Jesus disintegrated so that later they would not use it in sacrilegious acts. According to Kapenavich, Jesus or Zay, he had several incarnations on Earth, a planet he has to guide. Because of the high Spiritual level he now holds, he can no longer incarnate on Earth, but he has sent his teachings that will gradually be known and will help humanity change forever banishing evil .. What do you think about it?(origin of Jesus)