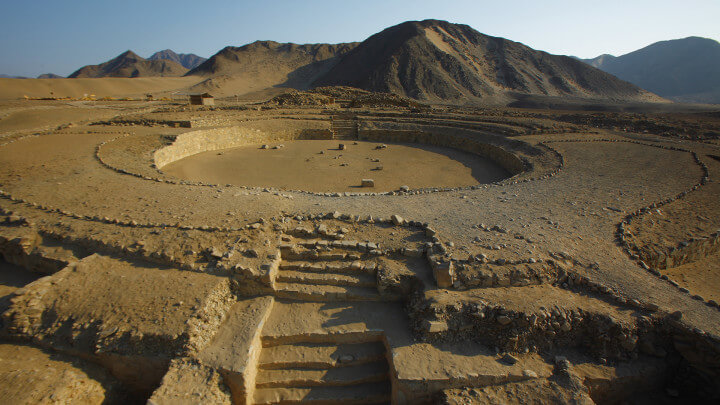 Located 120 miles north of Lima, between the Pacific coast and the mountains of central Peru, is the World Heritage Site of the Sacred City of Caral-Supe. The ancient ceremonial complex here extends over 150-acres and features a great stepped pyramid, a grand amphitheater, a handful of smaller pyramids, a plaza, and several residential structures. And although it is relatively unknown compared to other ancient sites in the region, like Machu Pichu, Cusco, and Tiahuanacu, it is, by far, the most archaeologically significant.

Initial radiocarbon dating of artifacts found at the site revealed it was an astounding 4,600 years old – but new excavations have revealed that the city is even older and was likely inhabited from roughly 3500 to 1700 BC. This makes Caral the oldest urban center and the “mother civilization” of the Americas. The sacred city is 4,000 years older than the Incan Empire – and 2,000 years older than the Olmec civilization. Incredibly, it existed simultaneously with the Sumerians in Mesopotamia and the time of the ancient pyramid builders of Egypt’s Old Kingdom.

Archaeologists identified the ruins of Caral-Supe back in 1905. Unfortunately, the structures at the site were entirely buried, and only a few features were exposed. So, no great interest was taken in exploring it further at the time. The area was intermittently excavated in 1941 and again in the 1970s. Researchers determined it belonged to a pre-ceramic culture. Since the occupants, referred to as the Norte Chico, had not yet learned the craft of firing pottery to produce ceramic goods, academics dismissed the site as a simple archaic settlement. However, in 1996, archaeologist Ruth Shady Solis took an interest in the site and unearthed the massive complex we see today. Solis had some artifacts found at the pyramid radiocarbon dated. Astoundingly, the results revealed the structure dated back to at least 2640 BC. This finding overturned all of the accepted theories on the origins of civilization in the Americas.

Moreover, further digs revealed artifacts in the surrounding areas that date back to an even earlier period. Excavation of the Supe Valley is still underway. After over two decades of work at the site, researchers have gained an exciting glimpse of this long-lost civilization that once occupied the region. PIECING TOGETHER THE PUZZLE

The exceptionally preserved architecture at Caral was intricately laid out in a circular manner with a great stepped pyramid, Piramide Mayor, to the north. This structure features a nearly 500-foot base and stands six stories tall. There are a series of five minor pyramids surrounding the central area. Many of which have astronomical alignments. One of the smaller pyramids has a standing stone monolith in front of it. The Huanca, as it is called, is just over seven feet tall and appears to be made of a stone that is not from the area. World mysteries researchers have noted that this standing stone is reminiscent of many other megalithic sites around the planet. There’s also a sizeable sunken amphitheater to the south.

Based on artifacts unearthed, the Supe Valley appears to have been a trading center. Bones from whales and seashells from the ocean have been unearthed at the Caral site, as well as the remains of animals commonly found in the jungles of the Amazon Bason. Additionally, various minerals that originated from the far reaches of South America have also been discovered. The inhabitants appeared to have thrived in this area for over 2000 years. However, archaeologists are confounded that the complex society had not advanced to the point of making ceramics. There were no standard ceramic water urns, bowls, or cooking pots unearthed. And curiously, no weapons or remains of defensive walls have ever been found either.

The Norte Chico of Caral has the hallmarks of a proper civilization. Science, engineering, and mathematics were clearly used in the planning and design of the structures. However, some archaeologists are hesitant to label the advanced society as a civilization due to their lack of ceramic artifacts and a written language. However, a discovery in 2005 of a unique ancient writing system directly challenges this status.

In July 2005, archaeologist Ruth Shady Solis presented a cache of items unearthed at the Caral archaeological site. Amongst the artifacts was a quipu (khipu), or arrangement of strings and knots believed to function as a recording device. Although it is not a written language as scholars commonly define it, the find indicates that the culture had an ancient communication system. And one that was in use for millennia after the fall of the sacred city.

Quipus were the preferred method of the Incan Empire to convey information. Spanish chroniclers noted that the Inca used this form to communicate not only mathematical data but also a written account of important information. Only priests and special messengers were trained to read the multi-layered code. Unfortunately, the ability to read the quipus died with the collapse of the Incan empire in 1533 CE.

To date, there have been 600 quipus found in South America. Yet, without a proverbial Rosetta stone, researchers have been unable to decode them. Prominent Pre-Columbian professor and Harvard researcher Dr. Gary Upton imported quipu data into a specialized computer program in order to find patterns to help decode the language. Although the work started in 2002, his Khipu Database Project has yet to crack the code. However, they have determined that the knots have a binary (on/off) quality similar to today’s computer code.

Is it possible that the Norte Chico had developed an advanced language unlike any other found on Earth? That is, until the introduction of our modern computer systems? But if so, how did they come to possess this advanced knowledge? Perhaps, once we decipher the quipus, we will find stories, like those meticulously recorded by the ancient Sumerians and Egyptians, that tell of visitors from the sky that taught mankind all about science, math, astronomy, and language.