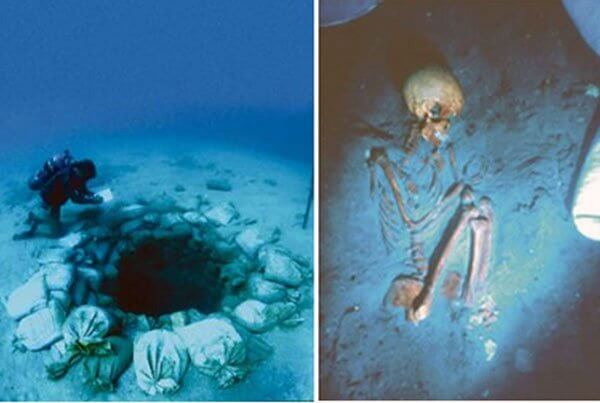 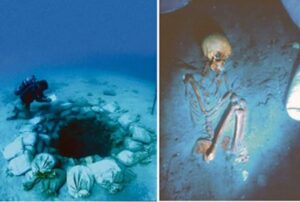 Not far off the coast of the village of Atlit in the Mediterranean Sea, near Haifa in Israel, lies the submerged ruins of the ancient Neolithic site of Atlit Yam. The prehistoric settlement, which dates back to the 7 th millennium BC, has been so well preserved by the sandy seabed that a mysterious stone circle still stands as it was first erected, and dozens of human skeletons lay undisturbed in their graves.  Atlit Yam is one of the oldest and largest sunken settlements ever found and sheds new light on the daily lives of its ancient inhabitants.

Today, Atlit Yam lies between 8 – 12 metres beneath sea level and covered an area of 40,000 square metres.  The site was first discovered in 1984 by marine archaeologist Ehud Galili, and since then underwater excavations have unearthed numerous houses, stone-built water wells, a series of long unconnected walls, ritual installations, stone-paved areas, a megalithic structure, thousands of flora and faunal remains, dozens of human remains, and numerous artifacts made of stone, bone, wood and flint.

At the centre of the settlement, seven megaliths (1.0 to 2.1 metres high) weighing up to 600 kilograms are arranged in a stone semicircle.  The stones have cup marks carved into them and were once arranged around a freshwater spring, which suggests that they may have been used for a water ritual.  Another installation consists of three oval stones (1.6 – 1.8 metres), two of which are circumscribed by grooves forming schematic anthropomorphic figures. 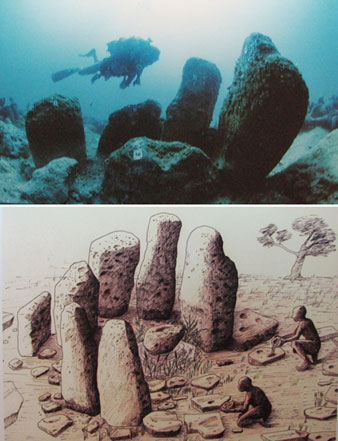 Another significant structural feature of the site is the stone-built well, which was excavated down to a depth of 5.5. meters.  At the base of the well, archaeologists found sediment fill containing animal bones, stone, flint, wood, and bone artifacts. This suggests that in its final stage, it ceased to function as a water-well and was used instead as a disposal pit. The change in function was probably related to salinization of the water due to a rise in sea-level. The wells from Atlit-Yam had probably been dug and constructed in the earliest stages of occupation (the end of the 9th millennium BC) and were essential for the maintenance of a permanent settlement in the area.

The ancient artifacts unearthed at Atlit Yam offer clues into how the prehistoric inhabitants once lived.  Researchers have found traces of more than 100 species of plants that grew at the site or were collected from the wild, and animal remains consisted of bones of both wild and domesticated animals, including sheep, goat, pig, dog, and cattle, suggesting that the residents raised and hunted animals for subsistence.  In addition, more than 6,000 fish bones were found. Combined with other clues, such as an ear condition found in some of the human remains caused by regular exposure to cold water, it seems that fishing also played a big role in their society. The archaeological material indicates that Atlit-Yam provides the earliest known evidence for an agro-pastoral-marine subsistence system on the Levantine coast. The inhabitants were some of the first to make the transition from being hunter-gatherers to being more settled farmers, and the settlement is one of the earliest with evidence of domesticated cattle.

Ten flexed burials encased in clay and covered by thick layers of sand were discovered, both inside the houses and in the vicinity of Atlit Yam, and in total archaeologists have uncovered 65 sets of human remains. One of the most significant discoveries of this ancient site is the presence of tuberculosis (TB) within the village.  The skeletons of a woman and child, found in 2008, have revealed the earliest known cases of tuberculosis in the world.  The size of the infant’s bones, and the extent of TB damage, suggest the mother passed the disease to her baby shortly after birth.

What caused Atlit Yam to sink?

One of the greatest archaeological mysteries of Atlit Yam is how it came to be submerged, a question that has led to heated debated in academic circles. An Italian study led by Maria Pareschi of the Italian National Institute of Geophysics and Volcanology in Pisa indicates that a volcanic collapse of the Eastern flank of Mount Etna 8,500 years ago would likely have caused a 40 meter high tsunami to engulf some Mediterranean coastal cities within hours. Some scientists point to the apparent abandonment of Atlit Yam around the same time, and the thousands of fish remains, as further evidence that such a tsunami did indeed occur.

However, other researchers have suggested that there is no solid evidence to suggest a tsunami wiped out the settlement. After all, the megalithic stone circle still remained standing in the place in which it had constructed.  One alternative is that climate change caused glaciers to melt and sea levels to rise and the settlement became flooded by a slow rise in the level of the Mediterranean that led to a gradual abandonment of the village. Whatever the cause of the submerging of the settlement, it was the unique conditions of clay and sandy sediment under salty water that enabled this ancient village to remain so well preserved over thousands of years.