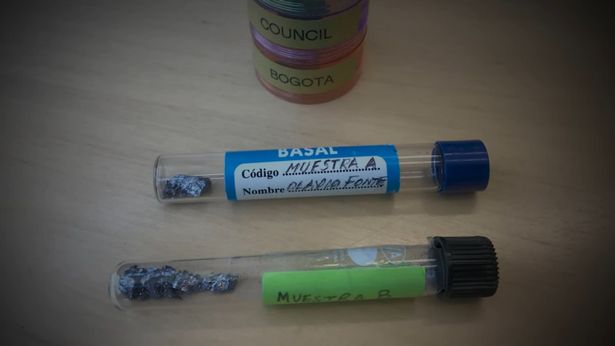 Debris from 70 years of alleged UFO crashes has been studied in a new state-of-the-art lab machine at Stanford University, California – and many were hoping some mysteries could be solved

Physical debris from two alleged UFO crash sites over the past 70 years has been examined in a lab, it has been confirmed.

A new state-of-the-art machine has enabled scientists at Stanford University, California, to study in-depth was what collected.

Metal debris from UFO cases dating as far back as 1947 has been investigated. It obtained through on field research of supposed crashes in Colombia and Argentina.

The new “multi-parameter ion beam imager” gives scientists the chance to look at the atomic structure of a selected material.

Do you believe in intelligent life on other planets? Have your say in the comments

He will analyze the samples right down to their individual atoms, in a process called Multiplexed Ion Beam Imagine.

At that microscopic level, the atomic structure is impossible to fake.

When Dr Nolan placed some of the fragments in the vacuum chamber of his instrument, he was astonished to find their composition unlike any other metal.

Scientists discovered that material found was manufactured and not natural (

“It’s something which has properties where somebody is putting it together again at an atomic scale.

“We’re building our world with 80 elements, somebody else is building the world with 253 different isotopes.”

The scientists discovered that this material was manufactured and not natural.

It comes as a new study claimed aliens could be powering their societies by harvesting energy from black holes.

Extraterrestrials could, theoretically, use a hypothetical megastructure called a Dyson sphere, which would encircle a star with a tight formation of orbiting platforms in order to capture starlight and produce power, it has been suggested.

Astronomer Tiger Yu-Yang Hsiao, of National Tsing Hua University in Taiwan, looked at whether one of these could actually be built around a black hole instead of a star in their paper.

Paper ‘A Dyson sphere around a black hole’ was published in July in the journal Monthly Notices of the Royal Astronomical Society.

In the study they looked at the possible emission from the accretion disk around a black hole, its corona, and even relativistic jets emitted by the black hole.

“Usually, accretion disks can provide 10,000 and even more times the energy you would get from a star like the Sun,” Hsiao told IFLScience.

“So instead of hunting 10,000 stars like our Sun, we can just find one black hole and build a Dyson sphere around it and it would be much more efficient.”