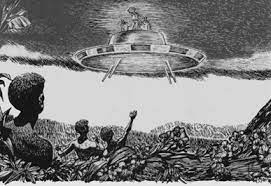 Over Papua New Guinea, UFOs have been consistently spotted since a year before when Father William Booth Gill, together with 37 other witnesses, claimed to have had one of the most well-known alien encounters. The Reverend Norman E. G. Cruttwell, one of Gill’s fellow Anglican missionaries in Australia, was inclined by the encounter and was keeping a detailed record and interviewing witnesses.

On the other hand, Gill was not sure about the encounter to some extent. When his colleague Kenneth Houston told him about an observation he made on October 18, 1958, Gill thought that Houston had seen the Soviet satellite Sputnik. On April 9, 1959, Gill did not immediately associate a strange light he saw high up on the flank of Mount Pudi near the mission station at Boianai with UFOs, even after the light reappeared on the opposite side of the mountain.

Even though it was a distance that no human being could have ever traveled in so short a time, Gill didn’t realize that it could be a UFO. Also, no one could ever live in such a harsh and isolated place. Stephen Gill Moi, who worked as Gill’s assistant, reported seeing an “inverted saucer” above the mission at 1 a.m. on June 21. On June 26th, he penned a letter to his UFO-obsessed acquaintance, Reverend David Durie, under the name “Doubting William.”

“I’m almost convinced of the ‘visitation’ theory,” he said, “but my simple mind still needs scientific evidence before I can accept the from-outer space theory.” But somehow, before he could mail the letter, he had an extraordinary experience.

A brilliant white light caught Gill’s attention in the northwest sky that day around 6:45. A crowd of 38 people gathered to witness a big disc-shaped object with four legs that was hovering above them. According to Gill, the enigmatic object’s angular size was almost equal to five full moons lined up end to end. On top of the object, there were also four humanoids whose bodies were lit up.

They were busy with some unknown task. Strangely, one or more of the figures would vanish from below at random intervals, only to resurface a short time later. The object disappeared into the thickening clouds at 7:30 and could no longer be seen. All of these strange sightings went on for four hours, and 25 people signed a report that Gill later wrote.

Surprisingly, the next day, that was September 27th, around 6 o’clock, the alien spacecraft with their passengers returned. There were two of the smaller UFOs and the mothership UFO with its four people were visible in the sky .

“On the large one, two of the figures seemed to be doing something near the center of the deck. They were occasionally bending over and raising their arms as though adjusting or ‘setting up’ something. One figure seemed to be standing, looking down at us. The figure stood with his hands on a ‘rail’ like the rail of a ship. I stretched my arm above my head and waved. To our surprise, the figure did the same. Ananias waved both arms over his head; then the two outside figures did the same. Ananias and myself began waving our arms, and all four seemed to wave back. There seemed to be no doubt that our movements were answered. As dark was beginning to close in, I sent Eric Kodawa for a torch and directed a series of long dashes towards the UFO. After a minute or two of this, the UFO apparently acknowledged by making several wavering motions back and forth (in a sideways direction, like a pendulum). Waving by us was repeated, and this was followed by more flashes of the torch. Then the UFO began slowly to become bigger, apparently coming in our direction. It ceased after perhaps half a minute and came no further. After a further two or three minutes the figures apparently lost interest in us, for they disappeared below deck. At 6.25 pm, two figures reappeared to carry on with whatever they were doing before the interruption. A blue spotlight came on for a few seconds in succession.”

Half an hour later, that is, at 6:30, Gill sat down to eat. After half an hour, he checked again, and the only thing that was still there was the “mother ship,” but it was much smaller and farther away than before. Afterward, he walked inside to serve as the pastor of a church.

At the conclusion of the event at 7:45, the sky had clouded over and no UFOs could be seen. The next day, on the evening of June 28, at 6:45, the UFO were once again visible in the sky for one last time. And once again, the aliens were visible.

“sharp metallic and loud bang on Mission House roof, as though a piece of metal had dropped from a great height. No roll of object down roof slope afterwards. Outside, four UFOs in a circle round station. All high. 11:30 pm to bed, and UFOs still there. “Monday 29/6/59. Roof examined. No apparent mark or dent, which one might expect from last night’s noise.”

Studies and Hypotheses Regarding The UFO Encounter

Gill’s report was included in a monograph compiled by Reverend Cruttwell, which also included accounts from other Anglican missionaries in Papua New Guinea. The monograph was the first comprehensive account of this extraordinary case available to ufologists, and it was reprinted in part in England’s Flying Saucer Review.

In 1973, Cruttwell and astronomer and former Project Blue Book adviser J Allen Hynek sailed to Boianai in a tiny boat. They were able to talk to six people who saw this strange thing happen, but Gill had left all of the research and anything to do with the event in 1959.

“One of them was Annie Laurie Borewa, the Papua medical assistant who first alerted Father Gill about the UFOs that appeared Saturday night. Annie Laurie Borewa and the others I talked with all agreed on the direction from which the objects had come and the manner in which they came. I found no basic contradictions. Of course they were a little hazy about some things because of the passage of time. But I came away with the impression that, whatever the event was, it must have impressed the heck out of them to have remembered it as vividly as they did. There was never any question on their part that “maybe it happened, maybe it didn’t happen” – it did happen. They were quite sure of that.”

Later, in 1977, Gill first came to the United States and then also stayed at the Hynek residence in Evanston, Illinois. Hynek and Allan Hendry asked Gill to point out the locations in the sky where the numerous UFOs were spotted. Hendry was then the chief investigator for the Center for UFO Studies. Based on this analysis, Hynek and Hendry concluded that the “lesser UFOs” were likely caused by bright stars and planets.

However the primary mothership UFO could not have been an astronomical phenomenon due to its size and lack of movement over three hours, as any astronomical object would have had to move through 45 degrees of arc in that time. Also, the sketches that each of the witnesses made soon after the sighting all showed a large craft.

“He remains puzzled by what he saw, but he questioned my characterization of some attempts to explain the sightings as “silly.” He felt that these “explanations” were serious attempts to bring understanding to the events. I think that attitude encapsulates the integrity of Gill and the reality of the affair.”

In 1995, Australian ufologist Bill Chalker talked with Gill and then wrote this.

On June 13, 2007, at the age of 79, Father William Booth Gill passed away after spending a lifetime of his life educating and exploring the world. This sighting of an unidentified flying object is a fascinating example of an unidentified aerial phenomenon that was experienced by a huge number of individuals.