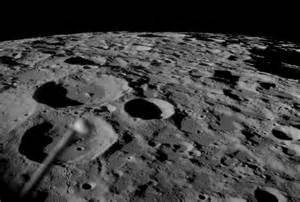 The monochrome Moon image, which is the source of the extraterrestrial speculation, is publicly available from the NASA archives. The photo, apparently shot during one of the Apollo mission, which ran between 1961 to 1972, shows the looming lunar surface as a probe approaches or leaves.

He said: “I found a structure in a NASA moon photo the other day and I decided to highlight it with yellow to make it more visible to others.

“Then I saw another and then another. I held onto the photo for a few day, highlighting a new buildings every so often because my eyes need a break.

“It takes a lot of focus and patience to see the things in the black and white photo correctly.

UFO sighting: The original photo was apparently shot during one of the Apollo missions (Image: NASA)

“It is hard, even for me, that is why I highlighted the structures.”

Some of the lunar patches picked out the UFO hunter he describes as “containers”.

And another oddly shaped object sitting on the Moon’s pockmarked surface is categorised as a “spaceship”.

One of the strangest – and apparently largest – of the sightings is identified by Waring as a “alien industrial complex”.

He added: “There are some incredible structures I found here – about 40 but I did see many more, but the detail was so poor on these I decided to leave them alone.

“There are some dark structures with I could not highlight because they are black.

“Check out the alien ships at the top center of the photo.”

The dubious findings made by Waring as used to promote debunked claims NASA is engaged in covering-up the existence of alien life on the Moon and elsewhere.

He said: “It is almost hard to believe humans still don’t know about these structures.”