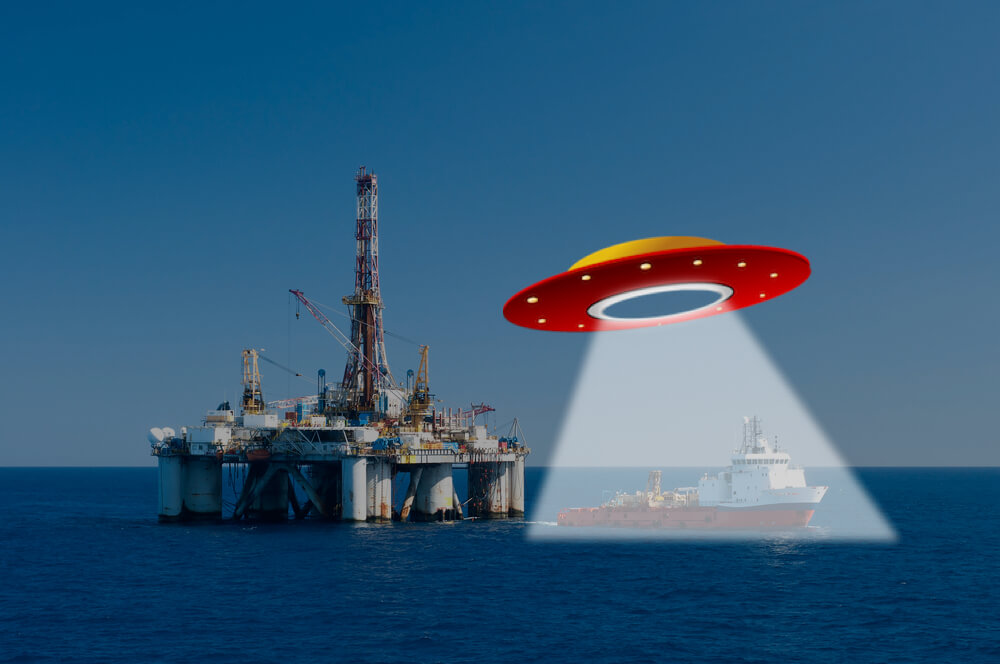 A crew member of an offshore supply vessel in the Gulf of Mexico claims he saw a UFO ‘fives times’ the size of his vessel and UFO trackers are now looking for more witnesses to come forward with any information possibly related to the sighting.

The UFO sighting reportedly occurred on Tuesday in the Gulf of Mexico approximately 80 miles southeast of New Orleans.

The sighting was submitted to the National UFO Reporting Center, which apparently tracks UFO sightings and data, by the chief engineer of an OSV working the Gulf of Mexico on Thursday afternoon. According to the eyewitness report

“Close to 7:00 pm on March 21st, just before dusk, myself and 4 of the crew members aboard our vessel saw a craft that appeared to be five times our 240 ft vessel in length. My line of sight was about 1/4 mile from our vessel. There was a rig behind the craft about a 1/2 mile. i used this to help gauge size of craft. Sighting was approximately 80 miles SE of New Orleans, Louisiana.

The scene lasted about 40 seconds. The craft rose up out of the water (Gulf of Mexico) about 40 feet, no water was dripping from the craft. Within a split second the craft disappeared at a 30 degree angle into the sky. Speed appeared to faster than speed of a light turning on in a room. Within seconds it had disappeared completely.

I can say for sure that the craft was dark colored, oval in shape and made no sound whatsoever.

With as many rigs (2), there has to be more witnesses than just the four on our vessel.

The NUFORC has even highlighted the sighting as being of particular interest among the 246 reports of UFOs received in March alone. And after speaking with the witness by phone, the NUFORC said the report seems legit and has urged more witnesses to come forward.

“We spoke via telephone with this witness, and he seemed to us to be unusually sober-minded,” NUFORC wrote in a note added to the original report. “We suspect that he is a very capable, and very reliable, witness. He estimates that upwards of perhaps 50 people, who were aboard nearby vessels, may have witnessed the event, as well. We would urge those other witnesses to submit reports of what they had witnessed.”

So, did you see a UFO in the Gulf of Mexico earlier this week?