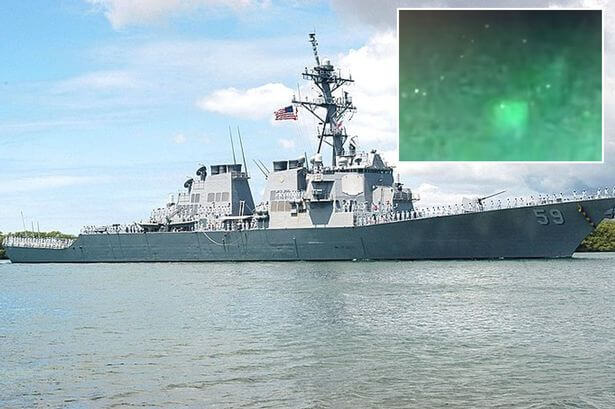 The explosive footage of “pyramid-shaped” UFOs swarming a US Navy destroyer may just be the beginning, with the filmmaker behind the leaks claiming there are “nine” more videos.

Jeremy Corbell shocked the world when he released FLIR (Forward Looking Infra-red) footage of unidentified objects hovering above the USS Russell off San Diego in July 2019.

Three photos of a “spherical” craft which was observed “descending into the water” by the crew of the USS Omaha in July 15, 2019, were also published on his website extraordinarybeliefs.com.

And he has since shared a fourth image of the Omaha craft to Instagram, which he says is a screenshot from the video.

The incredible images were taken, Jeremy says, from a classified UFO briefing conducted by the Office of Naval Intelligence on May 1, 2020. But the material the filmmaker released were unclassified aspects of the briefing.

The Pentagon have since confirmed the video and images are genuine but, in an exclusive interview with Daily Star, the filmmaker says this could just be the beginning.

“There are [a total of] 10 videos and 10-12 photos,” he explained, meaning there are a further nine videos yet to be released. “A lot of them are FLIR (Forward Looking Infrared), just like the tic-tac [seem in the infamous Nimitz encounter].

“There are objects that are clearly visible, I say objects I mean UFOs. That’s why this report was put together because everything they’re showing you is yet to be identified.

“There is more evidence. There is some footage in a war zone, in an active war zone through FLIR camera.

“This is what has been conveyed to me and I have been able to verify this content with numerous sources.”

Jeremy, who has produced numerous documentaries for Netflix, explained the purpose of the briefing where the UFOs were discussed was to educate high-ranking officials.

“This footage represents educational material that our Department of Defense, intelligence agencies and armed services use to educate individuals and these agencies of the UFO presence on Earth,” he told Daily Star.

“I’m not saying I know what is in these videos, that is job of the Department of Defense. I know UFOs are real and they represent a technology that is so far advanced from anything that human beings have been able to demonstrate that it leads one to this place of mystery and wonder.”

The 44-year-old, based in Los Angeles, US, published the material just two months before the Pentagon’s eagerly-anticipated report on UFOs will be released.

In a mammoth appropriations bill in 2020, the US government called for the release of an unclassified and all-sources report on unidentified aerial phenomena on June 1.

There’s MUCH more where that came from! Want all the latest news and views hot off the press every day?

How about the inside track on the soaps or what’s moving and shaking in the world of showbiz. Want the latest football lowdown, or even sex tips and an exclusive look inside the glamour industry?

Well, we’ve got you covered with our great newsletters – they’ll drop straight into your inbox and you can unsubscribe whenever you like.

And Jeremy hopes his incredible story will help the wider public to “push for UFO transparency” with governments around the world.

“Right now is the time, globally, for everyone to push for UFO transparency because we actually have a chance to make a difference to get more information,” he continued.

“It’s an astounding time, it’s an exciting time and we’re just all lucky to be a part of it.”

A spokesperson from the Pentagon has confirmed the authenticity of incredible leaked images and video from their UFO investigations. Night vision captured by a US Navy destroyer was posted online by filmmaker @Jeremy Corbell​, appearing to show ‘mystery’ flying objects near warships.
Share on social media Share on FacebookShare on TwitterShare on LinkedinShare on PinterestShare on XingShare on Reddit