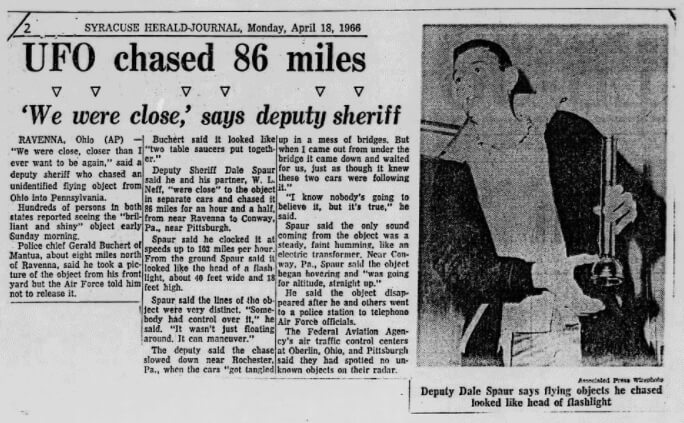 There have been thousands of UFO encounters around the world. Some witnesses benefited from their sightings while others faced a huge backlash. Fifty-five years ago, Ohio Policeman Dale Spaur chased a UFO for nearly 138 kilometers (approx. 86 miles), which later ruined his life. Skeptics pressurized him to believe it was just an atmospheric anomaly but Spaur resisted and stuck to his claim.

Dale Spaur, a 6’7” tall man, was the gunner on a B-51 in the Korean War before becoming a deputy Sheriff for Portage County, Ohio. On April 17, 1966, Spaur’s life changed forever. At around 5 a.m., he saw a large saucer-shaped craft ascended from the ground to the treetops, bathing the street downside with white light.

Spaur and his partner Wilbur Neff were called out to an abandoned vehicle near the town of Atwater during their night shift. They got out of their police cruiser to investigate, and it was the moment when Spaur saw a glowing object. The object was 40 feet across and was only 150 feet above them.

“I always look behind me so no one can come up behind me. And when I looked in this wooded area behind us, I saw this thing. At this time it was coming up… to about tree top level. I’d say about one hundred feet. It started moving toward us…. As it came over the trees, I looked at Barney and he was still watching the car… and he didn’t say nothing and the thing kept getting brighter and the area started to get light… I told him to look over his shoulder, and he did.”

“He just stood there with his mouth open for a minute, as bright as it was, and he looked down. And I started looking down and I looked at my hands and my clothes weren’t burning or anything, when it stopped right over on top of us. The only thing, the only sound in the whole area was a hum… like a transformer being loaded or an overloaded transformer when it changes.”

“I was petrified, and, uh, so I moved my right foot, and everything seemed to work all right. And evidently, he made the same decision I did, to get something between me and it, or us and it, or whatever you would say. So we both went for the car, we got in the car and we sat there…”

They saw the UFO flew to the east and stopped. Spooked by the incident, Spaur called the radio operator and told the sergeant on duty about it. He said the craft made a humming sound. The sergeant immediately ordered them to track the UFO.

The object started ascending upward as the first light of morning hit the sky. Police Officer Wayne Huston had been monitoring the radio broadcasts and luckily, he was present at the place from where Spaur and Neff would pass. As soon as Huston saw a UFO with two officers in a cruiser chasing it, he joined the chase.

Spaur was talking with other police officers who were coming for aid. At some point, Spaur noticed the UFO’s strange behavior. Once they took a wrong turn, the object also stopped and came to their position.

The long chase was about to end when Spaur’s cruiser ran out of gas and he had to stop to fill up the tank. There were four police officers who watched the UFO, heading straight up into the sky.

According to Spaur, they heard on the radio that jets were coming to chase the UFO. “When they started talking about fighter planes, it was just as if that thing heard every word that was said; it went PSSSSSHHEW, straight up; and I mean when it went up, friend, it didn’t play no games; it went straight up.”

Soon after this event, Spaur dealt with several reporters and his story went viral in newspapers in no time. Although there were three other police officers, it was Spaur who had to go through a mental breakdown as he kept telling the story while others backed up.

The US Air Force’s UFO study program, The Project Blue Book took initiative to investigate Spaur’s case. Lieutenant Colonel Hector Quintanilla was the head of Project Blue Book during that time. He was at Wright-Patterson Air Force Base in Dayton, Ohio. From 1965 to 1967, he used to get at least three UFO sightings a day. Spaur’s case was just a regular sighting for him, but he was getting a lot of pressure from the newspapers and UFOs buffs.

Quintanilla was not very interested in Spaur’s story. He thought the police officer might have seen a mirage. He also checked traffic and astronomical recording of that day and found three satellites and the planet Venus were in the sky when Spaur and other police officers saw the object. Later, he closed the case by writing in his report that Spaur chased a satellite and Venus.

Spaur knew the difference between a satellite and a huge metallic craft floating across the sky. It was unfortunate for Spaur as he did not stop talking. Besides, NICAP urged him to keep speaking.

The consequence of his close interaction with reporters caused him a mental breakdown. “A few months after his encounter with the UFO, his life was a disaster. Dale Spaur would never be the same man again. He lost his job, his family, his friends, and he found very little respect among his neighbors.” His wife put assault charges on him and left.

Spaur was a broken man. He moved to West Virginia and worked in a coal mine. He had a terrible life there as he fell from the hight of 70 feet and broke his back. He was a coma for several days. James Evans, Spaur’s son said: “A nurse was supposed to sit with him the whole time. But she only lasted a couple of hours. I guess she came running out of the room, screaming, This man is possessed by an alien.”

Further, he said: “I’m not so sure. I do not believe aliens have visited earth, for the same reason I believe intelligent aliens exist: there are billions of habitable planets in our galaxy alone. My best guess is Spaur and the others saw a top-secret experimental aircraft. And maybe Quintanilla knew it but couldn’t say so. Maybe that’s why he had to say it was a satellite and Venus, to discredit Spaur. Maybe that’s why he felt so bad about it afterward.

I didn’t like what was happening to Dale Spaur, and yet I was powerless to help him.”

Spaur died of pneumonia on April 4, 1983. James recalled that many people attended his father’s funeral, and he had no idea who they were. It is also believed that Spaur and Neff took several photos of that craft but they were never released.

“If I could change all that I have done in my life, I would change just one thing. And that would be the night we chased that damn thing. That saucer,” Spaur said.