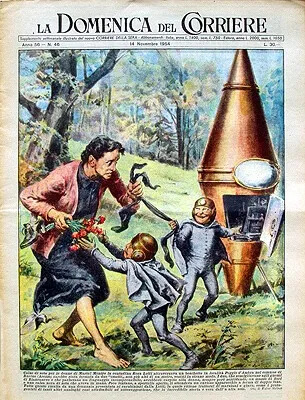 Rosa Lotti nei Dainelli (40), a mother of four, lived on a farm in a wooded area near the village of Cennina, in the Italian province of Arezzo (Tuscany region). On November 1, 1954, Rosa saw two tiny aliens that emerged from a UFO.

This happened when Dainelli was walking to the altar of the Madonna the Wanderer with a bunch of carnations. Suddenly, she saw some kind of barrel-shaped object, which immediately aroused her curiosity.

It looked like a long spindle, almost two meters high, and resembled two bells, put together and wrapped in something like leather.

Then, two tiny creatures appeared on the surface of this aircraft. They were friendly and had human-like faces. They were dressed in completely closed gray suits. Their equipment also included some kind of short capes or camisoles, which were fastened to the collar with small, star-like buttons. Helmets glittered on their small heads.

The little aliens acted energetically and lively. Dainelli thought the aliens were Chinese because they were speaking short words beginning with “l,” like loi, lai, loe, etc.

Their eyes were beautiful and “full of intelligence,” and their faces were normal, only the upper lip appeared to be slightly curved in the center, so it seemed as if they were always smiling.

According to Dainelli, their teeth were short and thin like a rabbit’s, but the ears were non-visible because of red-colored leather-like helmets.

The older looking alien was constantly laughing and seemed to want to make contact with Dainelli, but she got scared when he snatched the carnations from her hands.

Being surprised and embarrassed, Dainelli reprimanded him with all the severity she was capable of, and this creature returned her two flowers.
When the aliens went to their capsule, Dainelli seized the moment and ran away. She rushed headlong through the entire forest, and when she finally turned around to look at the mysterious creatures, they were already gone.