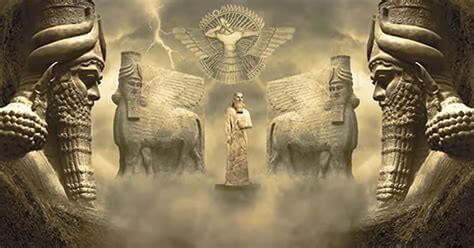 The word “Anunnaki” means ‘princely blood’ also the father and kings of god. In the past the anunnaki transferred the knowledge to ancient man. They are also aware of the people who came from heaven or stars. During 19th century the archaeologists of ancient Nineveh found 22,000 clay tablets connected with anunnaki.  Here are the top 10 evidences to prove the Anunnaki Aliens Among Us.

The human foot prints have been found in California along with the dinosaur foot prints. This has been proved over 65 billion years. This proves the human beings were on the earth before billion years. So this clearly shows the aliens were alive in earth.

The US government in 1940 proved that the anunnaki are seven or eight feet tall. They are with milky white skin and their eyes look red in color. Their cellular electrical capacity is much higher than ours.

The US government has made the existence of anunnaki camps in conflict with one another, to deal with both.  Prince Marduk heads the camp of 330 anunnaki here from Nibiru sine in 1970.

During 2016 BCE the chief scientist of anunnaki, prince Enki, told that the anunnaki rocketed to Iraq 450,000 years ago from a planet called Nibiru. They have insists the author Zecharia Stichin not to reveal the secrets of anunnaki anywhere in recent centuries.

The miners from the Nibiru spent lifetimes mining gold in Africa until 300,000 years ago. The anunnaki came to earth for the gold to send back to Nibiru to concentrate into atmospheric shield. There were also more efficient and intelligent miners.

The anunnaki helped the flood survivors and build cities of more than 45,000 people in the middle east, Egypt and Indus Valley. They also built airports, Pyramidal powerhouses and also temples around the earth. They also ruled the new civilizations as gods.

The anunnaki gave the best and the worst civilization of law codes, taxes, temples, medicines, wheeled vehicles, art, music and textiles. They also taught mathematics, grammar, botany, zoology and geography. They also had a worldwide energy in different aspects.

(8) Anunnaki stay on the earth

They made our predecessor, to follow the values of the nibiran mentality. We can assume the values of extraction, pollution, monetary monopoly and obsession with gold.

Please remember we all have different opinions, Think Before You Speak or Write Something that is cruel to Others. After all, We are only Humans. Wishing you clear skies and wide eyes. To share your experiences or just leave a comment there is a area below. Read or listen. We are the change the world has been waiting for! Have you witnessed an unidentified flying object? You are not alone. Whether you think UFOs are black projects, extraterrestrial craft, something else altogether, or just don’t know, again: you are not alone! Unconditional love. The road we all get to walk. Unconditional love is like the sun. WE ARE THE DISCLOSURE !!! ~~~ WE HAVE NEVER BEEN ALONE!!!