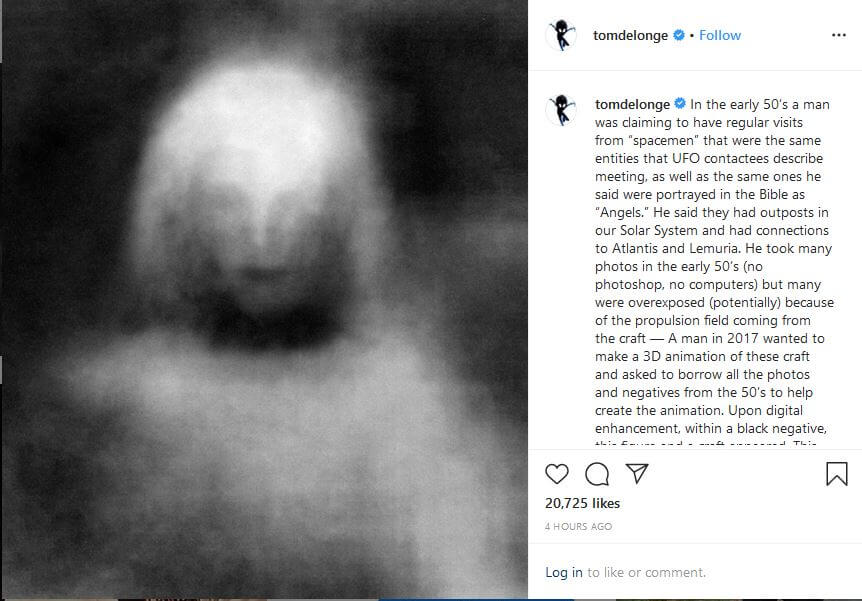 It “looks like” Jason Colavito, author and editor based in Albany, NY, internationally recognized by scholars, literature theorists and scientists for his pioneering work that explores the connections between science, pseudoscience and speculative fiction, did not like a message recently posted by Tom Delonge on the Instagram.

Last week, To the Stars Academy of Arts and Science founder and interim leader Tom DeLonge shared a bizarre Instagram post in which he seemed to endorse a number of controversial ancient astronaut and Theosophy-style beliefs about the imagined connection between space aliens, Atlantis and Lemuria, and Biblical angels. DeLonge discussed mid century ideas favored by Theosophy-inspired “contactees” and UFO preachers, and it appeared that he favors the idea that Biblical angels and space aliens are the same. Here is what he had to say:

Here’s what he published:

In the early 50’s a man was claiming to have regular visits from “spacemen” that were the same entities that UFO contactees describe meeting, as well as the same ones he said were portrayed in the Bible as “Angels.” He said they had outposts in our Solar System and had connections to Atlantis and Lemuria. He took many photos in the early 50’s (no photoshop, no computers) but many were overexposed (potentially) because of the propulsion field coming from the craft — A man in 2017 wanted to make a 3D animation of these craft and asked to borrow all the photos and negatives from the 50’s to help create the animation. Upon digital enhancement, within a black negative, this figure and a craft appeared. This may be what people describe as the “Tall Whites” or, “The Atanteans” [sic] or… “The Angels” of the Bible. They glow, they can almost look translucent (potentially) if they are surrounded by an electromagnetic force field, but really, they may be walking around on Earth “just like men” as the Bible and Vedic texts describe.

To be fair, there is actually a connection of sorts: As Ignatius Donnelly recognized (mostly by accident), Plato modeled the end of Atlantis in the Critias on Near Eastern flood myths, so the story resonates with intertestamental Jewish myths of pre-Flood activities of the fallen angel Watchers and their giant sons the Nephilim, whom Theosophy identified with Venusians and Martians and whom ancient astronaut theorists identified as visitors from other star systems.

I’d like to say that this was out of character, but it isn’t. These same ideas permeate DeLonge’s books, and they have also shown up in his Twitter feed and his media interviews, particularly his train wreck appearance on The Joe Rogan Experience a few years ago. DeLonge is proud of the fact that much of his knowledge of the paranormal and extraterrestrial derives from 1960s and 1970s paperback bestsellers, and there is no evidence that his knowledge base has grown since claiming to be the anointed mediator between the U.S. government and humanity.

This is not the first time DeLonge has shared dubious material on social media. He infamously shared a screen capture from the 2000 miniseries Taken and claimed it to be secret government images of a flying saucer.

I am, however, interested in the increasingly explicit efforts of the TTSA crew and their cousins in the Ancient Aliens orbit to equate angels and aliens and to follow Ignatius Donnelly in making Atlantis into an Eden. It has long been obvious that the ancient astronaut theory is religion in the guise of pseudoscience. It was even fairly obvious that the religion in question was Theosophy, since all the major ancient astronaut writers cite Helena Blavatsky approvingly.

But is there anything someone can say anymore that will disqualify one from lucrative government research contracts and cable TV contracts? It seems the only thing that can ensure that one is locked out of the government-media revolving door is to conclude that pseudo-scientific ideas are bullshit.