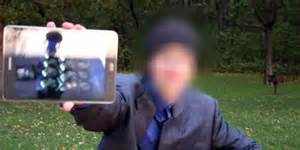 Have you ever wondered what the world will be like in the year 2045? Well, unfortunately, you’re going to have to wait another 27 years to find out.

That is unless you want to believe a man who has been filmed claiming to have travelled back in time from the year 2045, armed with footage, to tell us some shocking truths about the future.

In the six-minute video from ApexTV the unnamed man, whose face has been censored, makes several grand and exasperated proclamations from a windy location, which could easily be a scene from a Scandinavian crime series.

Let’s really dissect some of the stuff that he says in this clip. His opening lines are:

I do not have long before I need to leave.

They’re tracking me, and they know where I am right now …

I need to make this quick and I need to show you something that I have.

Firstly, who is following him and how are they tracking him and why is he is such a rush?

He follows that with:

My story… I know that this is going to be hard to believe.

For those of you that have not experienced this yourselves…

You will find this incredibly hard to believe but I can assure you that I am telling the truth and nothing but the truth because you deserved to know.

You deserve to know what is going on behind closed doors.

Time travel exists and it is being withheld from the public.

We really have to analyse his wording here. If time travel exists, how would any of us have ‘experienced this’ for ourselves.

Also, what is going on ‘behind closed doors’ and ‘why is it being ‘withheld from the public’?

Is time travel literally being invented right now in some corrupt government division? If so, why? The world has enough problems at the moment without dabbling with time.

He then goes on to explain that we have the ability to go into the future right now but we can’t because it is being kept a secret.

The next part is where I reckon his argument comes unglued.

2028??? That’s only 10 years away, but he earlier said that it is available now. Why can’t we have the time travel machines now? How much work do they need?

YOU MAY ALSO LIKE:  NASA shock: ET from Earth, Life on other planets would be Ex-Terrestrial, not Extra-Terrestrial

At this point, we already suspect that this video might be a bit of prank, but then he drops a bombshell that could shake the foundations of society to it’s core.

In 2045 humans and robots are converging into one. We are living as one.

Artificial intelligence governs the entire world. There are no longer countries in the year 2028.

Good God Almighty! This sounds like a plot to a bad Netflix original movie.

He never quite explains how humans and robots are becoming one, but the artificial intelligence government doesn’t sound too bad. It’s probably a lot better than the current crop of world leaders.

Oh, and if there was ever proof that Brexit negotiations were going well, look no further than the line ‘there are no longer countries in the year 2028’.

Throughout the video, he consistently says that he is in danger and that ‘they’ are looking for him. Then he makes another revelation.

The future is not necessarily bad but the future is very different and I think you deserve to know.

We mean we have no privacy now so that’s hardly a big change.

Also, if the future is ‘not necessarily bad’ then why is he so upset and what has he traveled back in time to tell us?

Something about ‘reverse engineering alien technology’ apparently and sending them back to 1945? What??? Why??? Who???

He then goes on to explain that he has been sent on a mission to the year 2018 to work on the time machines but doesn’t give a specific reason for what the aim of the mission is.

He then whips out a tablet, which he probably picked up from Argos, to show us some footage of the year 2045, which in all honesty looks like it came from PlayStation 2 game.