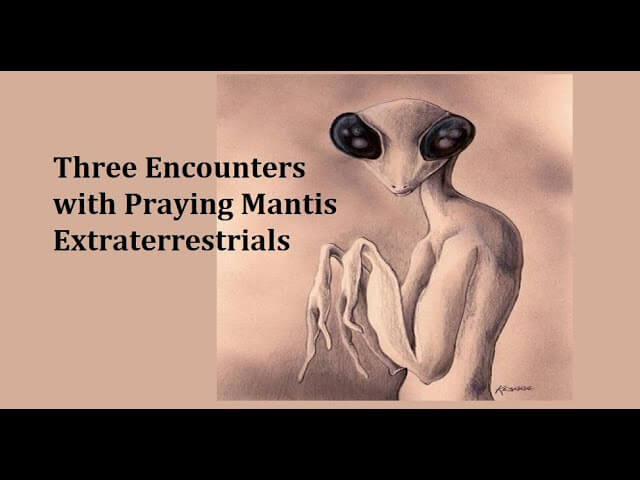 Preston Dennett
There are many different types of extraterrestrials: grays, human-looking ETs, reptilians, tall whites, little blue beings, hairy dwarves and strange humanoids of all kinds. One well-known species are called praying mantis (or mantids.) These are usually described as being anywhere from six to nine feet tall, but can be both shorter or taller. Witnesses say they have an insectoid appearance much like a praying mantis or even a grasshopper, with long stick-like limbs, thin torsos, and massive dark eyes. This video presents three separate cases, each involving a person who has had a face-to-face encounter with a praying mantis extraterrestrial. You will hear about a young married woman whose encounter was revealed during a hypnosis session. Another involving a college professor who had a missing time episode and then began having nightmares about being chased by a giant humanoid grasshopper. And a third case involving a teacher/daycare worker who encountered a praying mantis ET while out for her morning jog near her home. What do the mantids look like? What is it like to have an encounter with a giant humanoid praying mantis? These three cases answer these questions and more. The witnesses have bravely stepped forward and revealed their encounters in the hopes of helping others who may have had similar experiences. If you would like to explore more about these cases and others, you may bee interested in the brand new book, “Wondrous: 25 True UFO Encounters.”