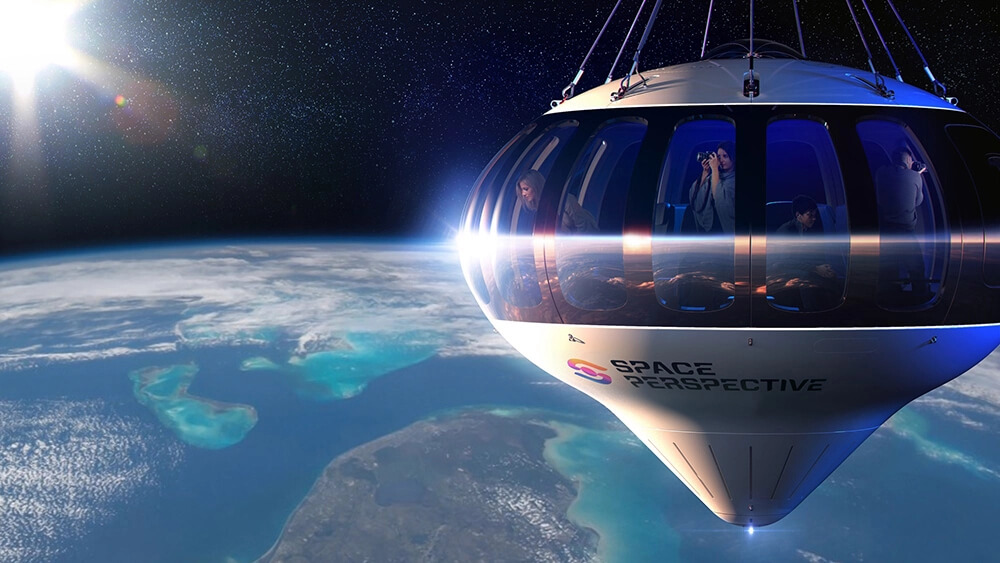 “If you’re looking for the fury and vibration of a rocket, you’ve come to the wrong place,” says Jane Poynter, cofounder of Space Perspective. “Our Spaceship Neptune offers a gentle ride into space that lets clients absorb the astronaut experience.”

The football-field-sized space balloon carrying the bulbous cabin into the sky at 12 mph (picture the pace of a leisurely bike ride) is in market contrast to the thunderous Flash Gordon blastoffs of Virgin Galactic and Blue Origin. Spaceship Neptune’s swanky, pressurized lounge is a panopticon of windows and includes a bar and bathroom. There’s even Wi-Fi. Instead of g forces gluing fliers to their seats, eight passengers and one pilot will sit in recliners, chatting and sipping cocktails as they gradually zoom out on Kennedy Space Center—Spaceship Neptune’s home port—until it becomes the Florida peninsula, then the East Coast and, eventually, a grand view of Earth itself.

“Some people would love to go pre-dawn,” says Poynter, “so you can really experience the extraordinary sky and see the iconic blue line that separates the Earth below and space. There’s almost a crazy rainbow effect.” 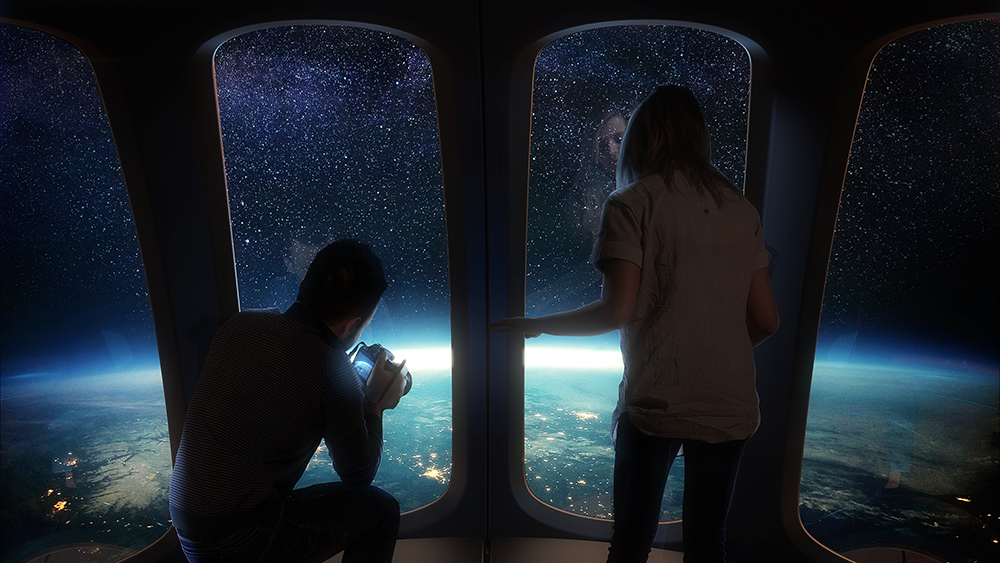 A rendering of what civilians would see from inside the balloon.  Space Perspective

Tested and used by NASA, high-altitude balloons have been around since the 1930s, when they were first employed for research and adventuring. Poynter and her husband, Taber MacCallum, cofounder of Space Perspective, developed and launched the space balloon that carried Alan Eustace to his record-breaking parachute jump of 135,980 feet in 2014.

Spaceship Neptune’s 100,000-foot climb technically won’t reach space, but Poynter says it replicates the suborbital rocket experience (what Richard Branson experienced during his historic July flight aboard Virgin Galactic’s spaceplane VSS Unity, minus the weightlessness) but with a lot more luxury, while still giving passengers incredible views of the curvature of the Earth below and the blackness of space above. “The way we designed it was to make it as easy as boarding a commercial aircraft,” says Poynter. “We wanted our clients to sit back and enjoy the luxury experience.”

Splashdown pickup is via boat. After a successful test of its prototype in June, Space Perspective began selling tickets for flights beginning in 2024, at a cost of $125,000 per seat.