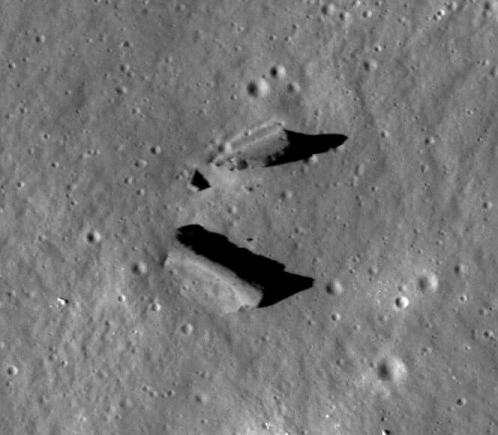 According to a report by the Society for Planetary SETI Research there are strange constructions on the moon’s far side that may have been constructed by extraterrestrials and are not of human origin.

With a Ph.D. in Plasma Physics, Dr. John Brandenburg worked on NASA’s Clementine Moon mission, which discovered bases on the moon in addition to the water in its poles in 1994. A “mile wide recto-linear building” that was “unmistakably constructed” and that “shouldn’t be there,” according to his description, was what he observed. Dr. Brandenburg expressed “huge anxiety” as a member of the space defense group since “it isn’t ours, there is no way we could have created such a device. It implies that someone else is present.

Dr. Brandenburg was instructed “not to meddle” with “an elite department team with the highest security clearance” that was analyzing the lunar imaging data once the Clementine mission was complete.

Carl Sagan Said That There Could Be Alien Bases on the Moon’s Dark Side and Extraterrestrial Visitation Was Possible.

Carl Sagan discussed the potential of alien contact in 1963, saying, “It is not beyond the realm of possibility that artifacts of these alien visits still exist, or even that some form of base is sustained inside the solar system to give continuity for subsequent expeditions. It would be preferred not to build such a base on the surface of the Earth due to weathering and the potential for discovery and intervention by Earthlings. The Moon appears to be a logical substitute. These possibilities could be considered in upcoming high-resolution photographic reconnaissance of the Moon from spacecraft, especially on the reverse side.

An observer with the US Air Force visited a National Security Agency (NSA) facility to learn more about bases on the moon’s dark side.

During his testimony before the National Press Club in Washington, DC, Karl Wolf, a member of the USAF with a top-secret cryptographic clearance, said that an NSA airman had told him in 1965 that they had identified a base on the moon’s dark side using the lunar orbiter photographs they had obtained. The mosaic depicted “the foundation, towers, geometric patterns, radar dishes, spherical buildings, and other large structures,” according to Wolf, who claimed to have personally seen it.

In actuality, the extraterrestrials have already told us what occurred on the other side of the moon. (Yes, There Have Been Ancient Alien Bases)

According to the author of the book “Thiaoouba Prophecy,” Michel Desmarquet, bases on the dark side of the Moon were established by residents of the planet Aremo X3 with the intention of migrating to Earth. They intended to repopulate Aremo X3, a planet that was growing uncomfortably overpopulated, with a number of million people. They possessed sophisticated technology at the time and could travel throughout the galaxy.

Thao, an ET, explains: “Around 250 000 Earth years ago, the Polynesian race that now lives on Aremo X3 took an interplanetary exploration voyage through your solar system. Before arriving in China, where their spaceship greatly startled the local populace, they skirted Saturn, Jupiter, Mars, and Mercury. Their tradition mentions “fire dragons” that descended from the skies.”

They went on and chose to live on the continent of Mu (Lemuria) after having conflicts with the Chinese. Lemuria was a region that had been produced by gaseous bands in the Pacific Ocean at the time. Due to its latitude, it was “a real paradise” and was mostly deserted.

Given that they killed Chinese citizens, “They decided it would be prudent to set up a base to which they might escape in case they came into other conflicts of a serious type from Earth people since they had grown extremely wary. Therefore, it was determined that their base of evacuation would be established on the moon, which was relatively nearby and thought to be highly secure, rather than on Earth.”

Emigration to Mu (Lemuria) didn’t start until the lunar bases had been constructed over the course of fifty years.

So indeed, there are extraterrestrial outposts on the opposite side of the Moon, which were developed by the inhabitants of the planet Aremo X3.

What happened to Lemuria? Lemuria’s continent sunk into the Pacific Ocean around 14,500 years ago, leaving only a few fragments as islands, including Easter Island and the Hawaiian Islands. It eliminated all the cutting-edge technology that the inhabitants of Aremo X3 possessed but kept to themselves. The Great Pyramid and the Moai Statues, achievements of their earlier technology, may still be appreciated, nonetheless.

What’s happening with Aremo X3 now? Sadly, the individuals who survived a nuclear war some 150 years ago have only a few survivors alive, according to the book Thiaoouba Prophecy.

Other mysteries about our existence on earth are revealed in the book “Thiaoouba Prophecy.”