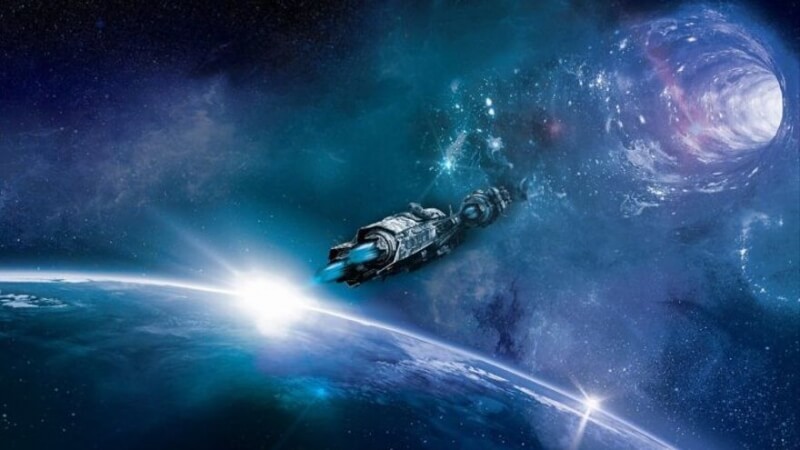 The universe is riddled with supermassive black holes that could actually be wormholes or tunnels that communicate with parallel universes, according to a hypothesis that is gaining momentum among astrophysicists.

We could unmask them from many ways, one of them measuring the gravitational influence that we would be receiving from stars located in a parallel universe.

We don’t have to go far to find out: a huge wormhole located between two parallel universes could be hidden in the center of our galaxy, according to recent research.

Wormholes are an old idea from general relativity: hypothetical objects that would connect two different regions of spacetime.

Shortcuts in time They are like shortcuts through which it would be possible to instantly travel to distant galaxies or a remote past, an astrophysical speculation that is more than 60 years old.

What we know for sure is that our galaxy hosts a complex radio emission source called Sagittarius A, of which Sagittarius A * is a part, discovered in 1974.

Within Sagittarius A * the presence of a supermassive black hole has been detected, located 26,000 light years from the Solar System, considered the best evidence that black holes with a mass of the order of millions of solar masses, really exist.

What some astrophysicists argue is that this supermassive black hole could actually be a wormhole.

If that is so, it could mean that other black holes identified by astronomers would also be wormholes: the cosmos could be full of tunnels to other universes.

That Sagittarius A * contains a supermassive black hole was deduced from stellar orbits at the galactic center: they suggest that the concentration of a mass of 4 million solar masses at the center of the Milky Way must be a black hole.

According to this method, published in Physical Review D, the anomalous movements of stars near Sagittarius A * cannot be explained by the dynamics of black holes, but rather by fields generated in a wormhole and by stars from another alternate universe, influencing this space-time tunnel.

The researchers suggest that, if this is the case, the movement of the stars that occurs around Sagittarius A * could be measured and the gravitational effect exerted on them by stars located in the parallel universe could be detected.

More possibilities The idea proposed in 2019 by Stojkovic De-Chang Dai has not gone unnoticed.

The authors of this proposal, belonging to the Central Astronomical Observatory of Pulkovo, in Saint Petersburg (Russia), propose to follow another clue to unmask them.

If supermassive black holes are actually wormholes, they can emit gamma radiation when collisions occur inside them.

That radiation would be very different from that emitted by supermassive black holes, so observing it would be evidence that they are actually space-time tunnels scattered throughout the universe.

Full of holes So far we know that supermassive black holes exist in at least a handful of galaxies: for example, in the Andromeda galaxy, located 2.5 million light-years away, there is also a central black hole that is significantly larger than that of the Milky Way.

Outside of the Milky Way and its surroundings, the largest supermassive black hole in the universe is believed to be in TON 618, a quasar in the constellation Canes Venatici.

It would have 66 billion solar masses, but it is possible that there is still another one of colossal dimensions (not yet confirmed): 196 billion times the mass of our sun.

Scientific revolution on the doorstep?

Scientific revolution on the doorstep? That monster would be in the quasar SDSS J0100 + 2802, located near the border of the constellations Pisces and Andromeda, 12,000 million light years from Earth.

It is hard to imagine that all these cosmic mysteries are tunnels to other parallel universes. We could confirm it in a decade, stand out ScientificAmerican.

If this is really the case, we would be on the verge of a great scientific revolution, although it must be borne in mind that these interpretations of what supermassive black holes are or are not might not be the only ones. Also, if wormholes really exist, astrophysicists highly doubt that they are passable for people. Let’s not get our hopes up.